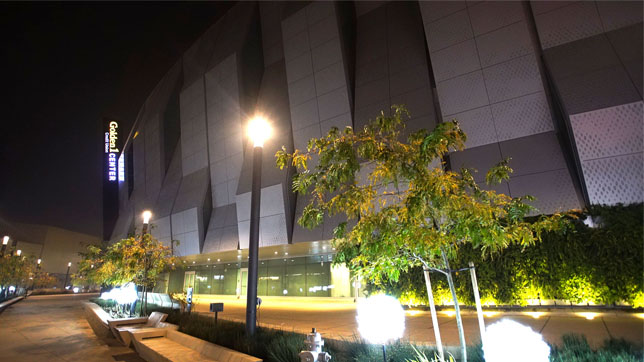 A group of about 20 young fans attending the Sacramento Kings game on Saturday got a glimpse into how 5G technology will change the way we experience live sports. Students from the local Men’s and Women’s Leadership Academy, and College Track Sacramento were invited to Golden 1 Center to watch the Kings face off with the Los Angeles Lakers and experience the game as if they were courtside — thanks to AR/VR and Verizon 5G technology.

The event marked the first time a U.S. professional sports team used 5G to deliver a live, in-game 360 virtual reality experience to fans. A courtside camera set up at the scorer’s table captured the game and streamed it live over Verizon’s 5G technology to the AR/VR goggles worn by the kids hanging out in the arena’s Esports lounge. The children then enjoyed an immersive 360-degree view of the game, waving to fans they saw virtually in the stands, as well as players that appeared as if they were just feet away.

“We’re giving fans a sneak peek at how 5G will ultimately change the way spectators experience live games, whether inside or outside of the arena, at home or on the go,” said Brian Mecum, VP of Network Engineering at Verizon. “As 5G evolves, it will change the stadium experience offering real-time information on how to best get to your seats, wait-times at concession stands and restrooms, and customized content like exclusive perspectives from coaches and players before, during and after the game. It will also give access to a whole new audience of people who previously may never have had the opportunity to watch championship games live from the front row.”

Similar to how electricity enabled the first MLB night game in 1935 or the VHS player in the 1980’s enabled fans to record live games and watch them at home later, 5G could take the art of the possible for sports fans one step further thanks to its incredible speed, massive capacity and low latency or lag. For consumers that means practically no buffering and no delay so fans will have the ability to live stream games in 360 virtual reality, download real-time stats and get 4K replays from multiple angles.

For players, 5G will provide them with more analytics to help improve performance. Earlier this year, Verizon equipped two NBA All-Star players with 5G-powered first-person goggles that had video cameras attached for some shooting practice. The live video from the cameras was streamed over Verizon’s 5G pre-commercial network and back to the goggles in near real-time, allowing both players to catch the ball and make their shots almost as if they were seeing with the naked eye. Ultimately, players will be able to do the same drills they practiced in VR during the game. The additional analytics of their performance would better inform the coaches how well simulations are functioning and where there is still room for improvement.

This event builds on Verizon’s series of 5G firsts like the first video call placed over a pre-commercial 5G connection on a prototype 5G device at the 2018 Super Bowl in February and the world’s first launch of a commercial 5G service, 5G Home, in October. 5G Home broadband internet service is currently available in four cities including Sacramento and Verizon’s on track to be first to 5G mobility early next year.

Hold on to your hats sports fans, 5G is about to change the entire sports viewing experience as we know it.