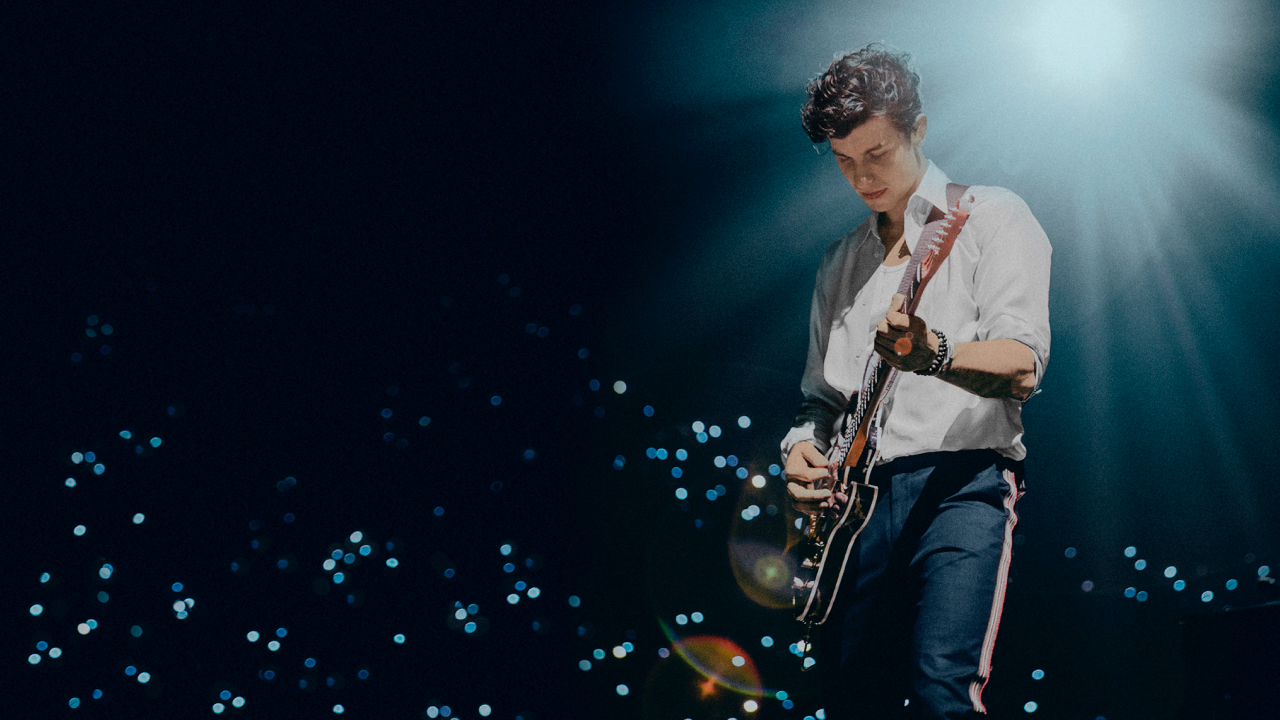 NEW YORK (April 9, 2019) – Verizon today announced its customer loyalty program, Verizon Up, will offer exclusive experiences throughout the year with musical artists Shawn Mendes, Camila Cabello and additional artists to be announced, thanking customers for being a part of the Verizon family.

The 2019 artist partnerships will give Verizon Up members the opportunity to attend intimate events designed specifically for each artist, admission to private shows and exclusive access to concerts. Making Verizon the one stop shop for all things music, Verizon is ensuring customers have access to not only the best experiences, but ultimate access to music at home and on the go. Bringing our best unlimited data and the best in unlimited music together, Apple Music is included in the Beyond Unlimited and Above Unlimited plans. And for customers choosing Go Unlimited, they can still get six months of Apple Music free.*

“My fans are the reason I make music and perform,” said Mendes. “This is why I’m so excited to partner with Verizon on some amazing experiences that will get fans even closer to me than ever before. I can’t wait to share the energy of my shows in a truly unique way.”

“We want our customers to enjoy the best music, the best experiences, all on the best network— that’s why our customers chose us,” said Diego Scotti, Chief Marketing Officer, Verizon. “In sports and music nobody gives you more access than Verizon. Not only access to events but also once in a lifetime VIP experiences our customers will never forget.”

“My Camilizers are truly the best fans in the world,” said Cabello. “So when Verizon approached me with a way to thank them through the creation of some once in a lifetime experiences, I couldn’t turn it down.".

Additional Verizon Up music rewards throughout the year will include:

With no fee to join and easy enrollment via the My Verizon app, Verizon Up is simple – earn rewards by just being a customer. Members are eligible for everyday rewards and live experiences, including customized rewards available every month.

*After 6 months, it’s $9.99/month per line subscribed to Apple Music unless you cancel. For New Mexico residents, Apple Music ends automatically after 6 months. You may cancel at any time.

GRAMMY nominated Toronto born multi-platinum singer/songwriter Shawn Mendes released his highly anticipated self-titled third album in May 2018. The album debuted at #1 on the Billboard 200 album chart as well as multiple additional worldwide markets, including Australia, Canada, Mexico, Belgium, Holland & more and shot to #1 on iTunes in more than 80 countries immediately upon release. The album became one of the top best-selling album debuts of 2018 and made Shawn the third youngest solo artist to ever have three consecutive #1 albums. At the end of 2018, Shawn was nominated in two categories for the 61st annual GRAMMY® Awards, including “Song of the Year” for “In My Blood” and “Best Pop Vocal Album” for Shawn Mendes. Leading up to the album, he released multiple tracks including “Youth” Featuring Khalid, “In My Blood” and “Lost In Japan.” Both “In My Blood” and “Lost In Japan” experienced massive success, soaring to the #1 and #2 spots on the overall iTunes chart in the U.S, Top 5 on iTunes in over 50 countries, and held the #1 and #2 spots on Spotify’s “New Music Friday” playlist. With “In My Blood,” Shawn became the first artist to ever have four #1 singles at AC radio before the age of 20.

In April 2017, Shawn released his 3x Platinum hit “There’s Nothing Holdin’ Me Back.” The track scored Shawn his second #1 single at Top 40 radio and on Billboard’s Pop Songs chart, joining his 7x Platinum single “Stitches.” Throughout his career, Shawn has achieved 3 consecutive #1 album debuts, 2 platinum albums, and 8 consecutive platinum and multi-platinum singles. Worldwide, he has sold over 15 million albums, 125 million singles, and has amassed over 20 billion song streams and 6 billion YouTube views. Shawn has completed two sold-out world tours with over one million tickets sold, selling out legendary stadiums and arenas including NYC’s Madison Square Garden and London’s O2 Arena in minutes. On his upcoming tour, Shawn Mendes: The Tour, he sold out his first ever stadium show in minutes at Rogers Centre in his hometown of Toronto. The tour begins in March 2019, with over 70 dates currently announced across the UK, Europe, North America, Latin America and Australia/New Zealand, with more to be announced soon. He topped Billboard’s “21 Under 21” in 2017 and 2018 and has been featured on Forbes “30 Under 30,” Spotify’s “25 Under 25,” and Time Magazine’s “Time 100 Most Influential”. In February 2018, ROI Influencer Media recognized Shawn as the #1 Most Influential Artist and #1 Most Influential Teen across all social media platforms.

Multi Grammy nominated Cuban born singer/songwriter Camila Cabello (Epic Records / SYCO) released her debut solo album, CAMILA in January 2018 to rave reviews. It debuted at #1 on the Billboard 200 chart at the same time as her single “Havana” Reached #1 on the Billboard Hot 100 chart, making Camila the first soloist in nearly 15 years to reach the #1 spot on the Hot 100, Billboard 200 and Artist 100 charts in the same week. The RIAA platinum-certified album, CAMILA, launched its debut at #1 on 110 iTunes charts around the world, breaking the record for most #1 positions for a debut album in iTunes history. Camila also became the #1 artist on global Spotify. At the end of 2018, Camila was nominated for two Grammy awards, “Best Pop Vocal Album” for her album, CAMILA, and “Best Pop Solo Performance” for “Havana” (Live). She took home awards for Artist of the Year and Video of the Year for her hit “Havana” at the 2018 Video Music Awards. She also tied Taylor Swift as the most awarded artist at the 2018 American Music Awards bringing home four awards. Beginning her official solo career after four years in Fifth Harmony, Camila released her RIAA 7x platinum smash hit “Havana,” in August 2017 where it obtained the #1 spot on the pop radio chart, marking her second top 40 #1 as a solo artist. Furthermore, “Havana” hit #1 on iTunes overall top songs chart, #2 on the Spotify Global chart and hit #1 in 80 countries around the world. “Havana” is the first song by a female artist to reach No. 1 on Billboard’s Adult Contemporary, Pop Songs and Rhythmic Songs charts in 22 years, it has earned over 1.1 billion on-demand U.S. streams, according to Nielsen Music, and attained the longest run at No. 1 on Pop Songs for any song by a female artist since 2013. Havana became the most streamed song of all time by a female artist. Her double-platinum single “Never Be The Same,” was released in January 2018 and peaked in the top 10 of the Billboard Hot 100 chart. Camila became the first artist in history to have two multi-format number one singles as the first two singles from their debut album.  Camila had previously earned a chart-topping smash with her recent double platinum-certified hit “Bad Things” with MGK. The track generated over 400 million on-demand streams. As a result of its success, she became the fifth female artist to hit #1 on the Pop songs chart with and without a group. In November 2018, Camila was named the new ambassador for Save the Children.

About SOMETHING IN THE WATER

SOMETHING IN THE WATER is a multi-day music festival and cultural experience created by Pharrell Williams, which will take place on the beach in his hometown of Virginia Beach, April 26-28.

SOMETHING IN THE WATER’S mission is to unite the community and celebrate the diversity and magic of Virginia Beach.  It is an opportunity to bring the best of what Pharrell has encountered around the world back to his hometown. The weekend celebrates opportunity and the chance to empower everyone from the youth to the small business owners.

On April 26, 27 and 28 musicians, personalities, scholars, students, artists, activists and athletes will converge on Virginia Beach to activate and amplify, collaborate and co-author, shift and shape the future. Other cultural activations will include moments with Deepak Chopra and Geoffrey Canada, a special screening and conversation presented by Ava Duvernay’s ARRAY, as well as a Pop-Up Church Service and TRAP Karaoke.