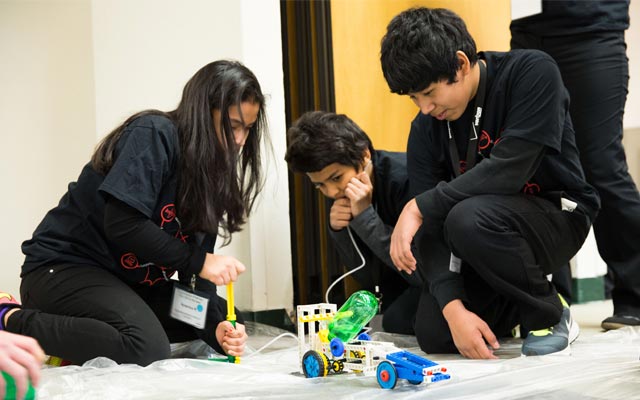 Of all the energy displayed at a recent STEM Day at Rutgers University’s School of Engineering, “kid power” was by far the most impressive. At the day-long event, about 60 eager seventh- and eighth-grade students from New Brunswick Middle School built, powered and raced several cars or other moving objects, with the help of Rutgers students and Verizon employees.

Once the young engineers-for-a-day constructed their vehicles, they had to figure out how to power them with either air and water pressure or solar power. Two teams worked on controlling their race car with a tablet.

The teams then raced their creations, with some NASCAR-rivaling results. In one race, one team’s air- and water-powered object looked like it wasn’t going to make it across the room when it suddenly kicked into high gear and cut off the other object to win the race. Students and volunteers were stunned at the reversal and cheered.

The middle schoolers made an impression on the Rutgers students. Hsingyo Yin, a freshman studying civil and electrical engineering, said, “I was surprised by how they were quick to figure things out on their own.”
For Students – Full-Time Positions

The various hands-on building projects allowed the New Brunswick students to experience the fun side of science, technology, engineering and math subjects. Seventh-grader, Bernardo Narvaez enjoyed working on the STEM project, touring the labs and speaking with two Verizon employees about how they got their jobs and what he would need to qualify for jobs in STEM fields.

The Rutgers STEM Day event is one of eight Verizon is holding in conjunction with Engineers Week. Other events are scheduled in Basking Ridge, New Jersey; Jacksonville, Florida; Stockton and Ana, California; Alpharetta, Georgia; Ferguson, Missouri; and Columbus, Ohio.

Verizon is focused on getting students interested in and encouraging them to consider pursuing a career in STEM. Recent data show jobs in occupations related to STEM are projected to increase to more than 9 million between 2012 and 2022. 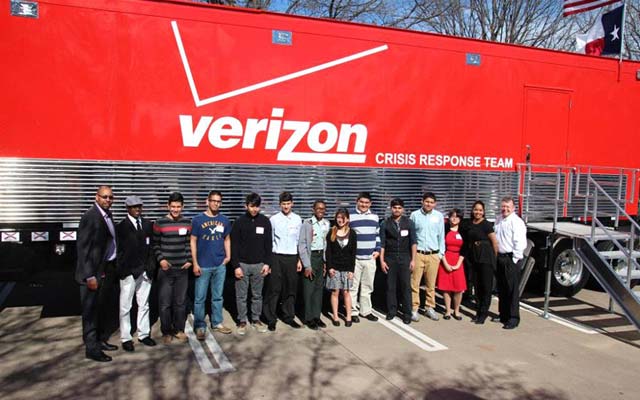 Paving New Pathways to Technology
02.23.2015 | Corporate Responsibility
A group of twelve students from Waco, Texas visited Verizon’s Richardson facility to get a head start on their future.

Putting the Spotlight on African-Americans in Tech
02.02.2015 | People
In honor of Black History Month we are shining the bright light on the positive influences that African Americans have made in the tech industry.