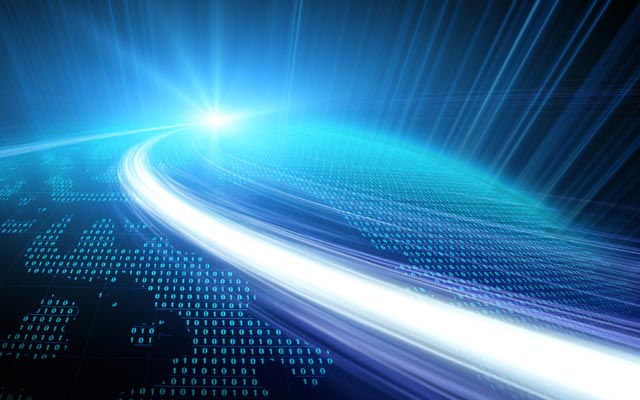 With the new service, large files move with the ease and fluidity of an email:

[NOTE: A video, infographic and charts offering fuller representations of specific consumer and small-business benefits of faster downstream and upstream are available here].

“Internet-power users have found a friend in FiOS Quantum Internet,” said Bob Mudge, president of Verizon’s consumer and mass business group.  “Over the past year, one-third of FiOS Internet customers have upgraded to Quantum speeds of 50 Mbps or faster to do more of what they want, whenever they wish, on more devices throughout their home or office.

“Our customers want and get a leg up on online video games. They want to stream movies on myriad devices; share tons of pictures and home videos; and send big work files so they don’t skip a beat when they’re working from home or growing their business. Our all-fiber-optic network lets them do it all at the same time,” Mudge said.

The 500/100 Mbps speed is initially available in parts of every FiOS market, and Verizon will deploy the service throughout the entire FiOS footprint into 2014.  For consumers, the 500/100 Mbps speed is available as part of a bundle or in stand-alone fashion, starting at $309.99 per month for a double play or $329.99 per month for a triple play with a two-year agreement.  For small businesses, the new top speed is only offered on a stand-alone basis, starting at $369.99 per month with a two-year agreement.  The service also is available to consumers and small businesses  on a no-contract, month-to-month basis.

The Internet of Things Requires Bandwidth

Verizon FiOS customers can choose to enjoy the Internet at speeds many times higher than the national average. Customers have the option of six speed tiers from which to choose, starting at 15/5 Mbps, to 300/65 and up to 500/100 Mbps.¹

For the eighth consecutive year, Verizon FiOS customers rated their Internet service tops, with FiOS again receiving the PCMag.com annual Reader’s Choice Award. Not only did FiOS Internet earn the highest overall satisfaction rating in the well-regarded magazine’s annual survey of its readership, but it secured the highest ratings in many other key categories, including speed, reliability and satisfaction with tech support.

1 Speeds not available in all areas.

Verizon Communications Inc. (NYSE, Nasdaq: VZ), headquartered in New York, is a global leader in delivering broadband and other wireless and wireline communications services to consumer, business, government and wholesale customers.  Verizon Wireless operates America’s most reliable wireless network, with more than 100 million retail connections nationwide.  Verizon also provides converged communications, information and entertainment services over America’s most advanced fiber-optic network, and delivers integrated business solutions to customers in more than 150 countries, including all of the Fortune 500.  A Dow 30 company with nearly $116 billion in 2012 revenues, Verizon employs a diverse workforce of 180,900.  For more information, visit about.verizon.com.

Custom Dry Cleaning on the Cutting Edge
03.05.2015
For Richie, every day is an opportunity to produce quality cleaning results that help set his business apart from the competition.
Verizon FiOS Customers Get More Than They Pay For When It Comes to Internet Speeds, According to Latest FCC Broadband Performance Tests
06.18.2014
The Federal Communications Commission on Wednesday (June 18) issued its "Measuring Broadband America Fixed Report" on broadband speed and reliability testing for residential broadband service
Accessibility Resource CenterSkip to main content
Services & Solutions
Support
Network Technologies
Innovation
Ad and Content Platforms
Follow Careers
facebook-officialtwitteryou-tubeinstagram