History will likely be made at Super Bowl 50 – after, all, it’s the biggest Super Bowl the NFL has ever celebrated. Verizon customers can capture and share every historic moment, thanks to the enhancements made to the nation’s most reliable wireless network throughout the Bay Area.

Verizon has made a $70 million long-term investment to more than triple 4G LTE wireless data network capacity in the Bay Area for Super Bowl week. That’s an investment that will benefit customers living in and traveling to northern California well into the future, too, adding capacity for web browsing, video streaming, social media posting and more.

A better network doesn’t happen by accident – hundreds of Verizon employees have worked for nearly two years to prep for Super Bowl 50, boosting network performance at more than 10 major area venues from San Francisco to Santa Clara, along with the three major area airports and several player and NFL hotels. Here’s just a bit of what they’ve accomplished so far:

Verizon will field its own team on Super Sunday, too. Before and during Super Bowl 50, a special team of 100 technicians and engineers will monitor and manage the network in real-time both in San Francisco and in and around Levi’s Stadium to help ensure the best performance.

At the 2015 Super Bowl, Verizon customers in Phoenix used 4.1 terabytes of data. A state-of-the-art facility, Levi’s Stadium is designed to handle 1.5 times the wireless data traffic on the Verizon network as compared to University of Phoenix Stadium. 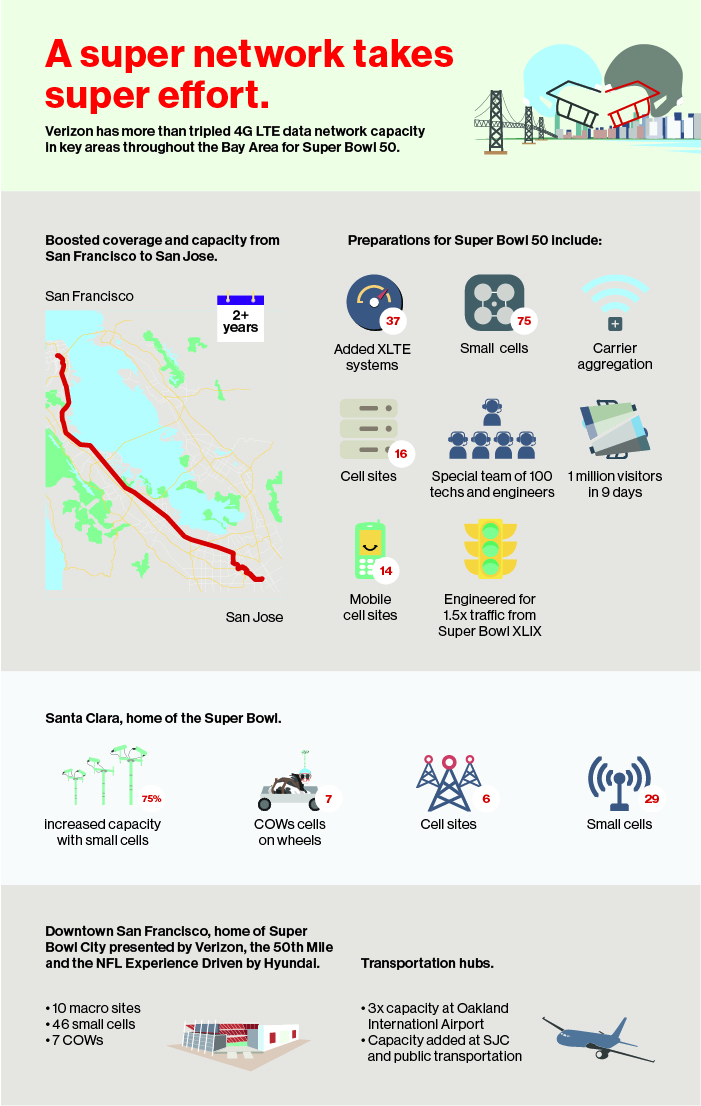 A big win for investment & Verizon
08.18.2015
There is a reason why Verizon is on the cutting edge of mobile innovation: we invest. We invest in spectrum. And we invest – heavily – in building out
Wireless milestone reached in rural America
10.15.2015
Verizon it has met its goal of deploying 4G LTE technology and spectrum across rural counties in 15 states.
Services & Solutions
Support
Network Technologies
Innovation
Follow Verizon News
twitterinstagram
Follow Inside Verizon
twitterinstagram
Follow Customer Support
facebook-officialtwitter