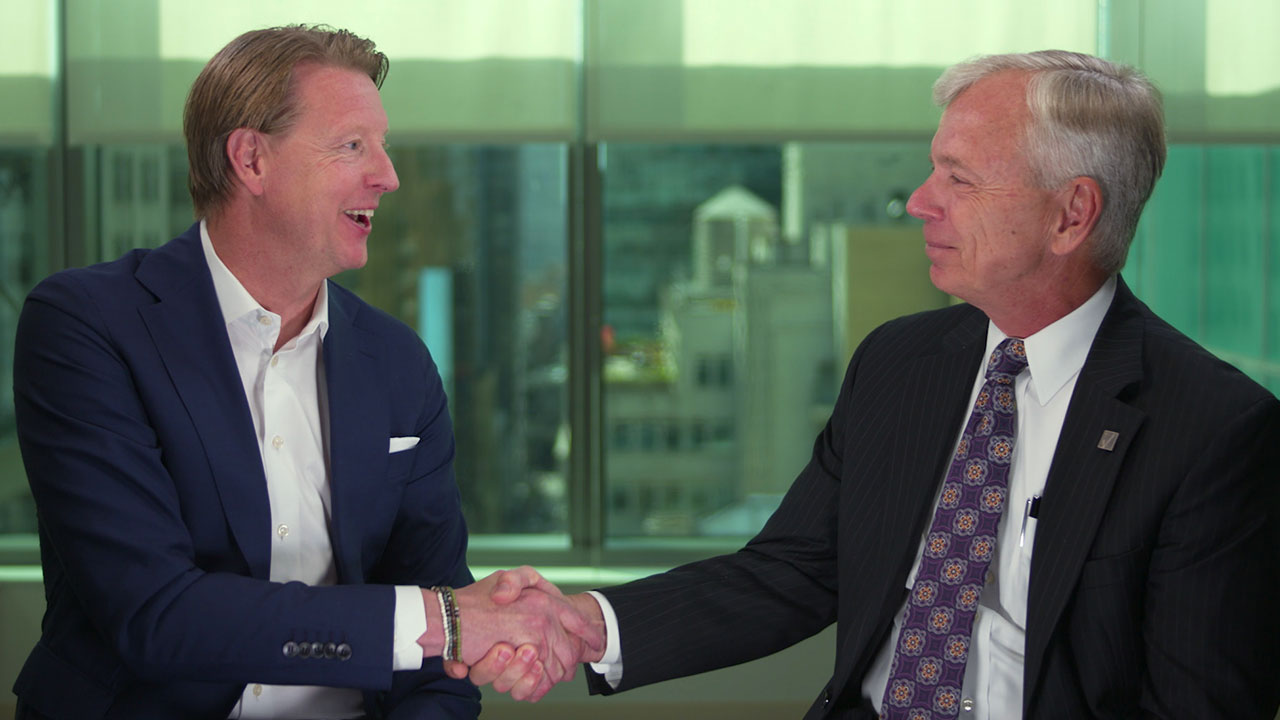 View PDF of this release

NEW YORK – Verizon Communications Inc. (NYSE, Nasdaq: VZ) today announced that its Board of Directors has named Hans E. Vestberg, Executive Vice President and President of Global Networks and Chief Technology Officer, to succeed Lowell C. McAdam as CEO, effective August 1, 2018. McAdam, 64, will serve as Executive Chairman of the Board through his retirement from the company at the end of the year, at which time he will become Non-Executive Chairman.

Hans Vestberg, 52, is currently Executive Vice President and President of Global Networks and Chief Technology Officer. His responsibilities include further developing the architecture for Verizon’s fiber-centric networks, including the country’s leading 4G LTE network, the largest and first 5G deployment in the U.S., the nation’s broadest residential fiber network, and a global internet backbone and undersea cable network carrying much of the world’s internet traffic. In this role, Vestberg has spearheaded Verizon’s efforts to deliver seamless experiences for customers over the company’s network, while demonstrating a willingness to disrupt established processes and practices to make Verizon stronger and more efficient.

McAdam said, “I strongly believe in the power of change to drive long-term growth and innovation. For Verizon, the time for a change in leadership is now, and I am confident that Hans is the right person to bring Verizon through its next chapter. Hans is an energizing force who will continue to position Verizon to lead the Fourth Industrial Revolution – the emergence of technologies that blend the physical and the digital to create historic breakthroughs in connectivity and mobility. It has been my great privilege to serve alongside some of the brightest minds in the business during my tenure. I look forward to working with Hans and the Board to support our customers and employees, and deliver value for shareholders.”

Vestberg said, “I am humbled to be appointed CEO of Verizon at such an exciting and dynamic time for our company and industry. We are experiencing unprecedented changes in the way users interact in the digital world, and we are racing ahead to remain at the forefront of technology, connectivity and mobility. To know Lowell is to be inspired by his vision for Verizon’s role in shaping the future. I look forward to building on this momentum while continuing to focus on strengthening our customer relationships, and driving growth and profitability throughout the business to deliver long-term value. Best of all, I get to do this alongside the greatest team in the business.”

M. Frances Keeth, Lead Independent Director of Verizon’s Board of Directors, said, “Verizon has a history of robust succession planning to ensure that the company is best positioned to deliver on our value proposition to all stakeholders. The leadership succession announced today is part of a deliberate and thoughtful process that began to take shape three years ago.”

She added, “The Board has been impressed not only by Hans’ performance and vision leading one of the largest organizations within Verizon, but also by his depth of experience, track record of operational success and passion for innovation. Hans is uniquely qualified to step into this role and to continue to drive growth and innovation across Verizon’s platforms. The Board’s comprehensive process underscores our confidence that Hans has the right characteristics and global perspective to drive transformational change and lead Verizon into the future digital world.”

Keeth continued, “On behalf of the entire Board, we thank Lowell for his nearly two decades of service to Verizon and the valuable contributions during his tenure as CEO. Lowell has been a visionary leader, steering Verizon into new growth markets in wireless, the Internet of Things and digital media. We look forward to continuing to benefit from his insights and leadership as Executive Chairman, and know he and Hans will ensure a seamless transition for our customers, employees, shareholders and partners.”

Since April 2017, Hans Vestberg has served as Executive Vice President and President of Global Networks and Chief Technology Officer, with responsibility for further developing the architecture for Verizon’s fiber-centric networks. Before joining Verizon, Vestberg served for six years as President and CEO of Ericsson, a multinational networking and telecommunications equipment and services company headquartered in Sweden that provides 35 percent of the world’s 2G, 3G and 4G mobile network infrastructures.

In this role, he led more than 115,000 employees as the company transformed from a focus on hardware to software and services. From 2007 to 2009, Vestberg served as Chief Financial Officer at Ericsson, and he previously served in a number of leadership positions at Ericsson, where he gained broad global experience and was instrumental in developing Ericsson’s industry-leading services organization, which grew three-fold during his tenure.

Vestberg was a founding member of the International Telecommunications Union (ITU) Broadband Commission for Digital Development, where he led climate-change and digital-health initiatives. He is past Chairman of the Swedish Olympic Committee and a current member of the Leadership Council of the United Nations’ Sustainable Development Solutions Network. He is also Vice Chairman of Hexagon and a board member of the UN Foundation, the Whitaker Peace & Development Initiative, and Childhood US (part of the Queen of Sweden’s World Childhood Foundation).

McAdam is one of the architects of today’s global wireless industry, having built wireless businesses on three continents since the technology’s development in the 1980s. During his tenure as CEO, McAdam strategically positioned Verizon for next-generation growth. Since 2011 Verizon has made more than $120 billion in capital investments, in addition to AWS, Straight Path and other spectrum purchases, to enhance its networks, while pursuing an M&A strategy focused on wireless, media and broadband services. Leveraging Verizon’s unique position to drive growth, the company has returned more than $54 billion to shareholders in cash dividends since 2011.

Under McAdam’s leadership as CEO, Verizon took over complete ownership of Verizon Wireless in 2014 through a $130 billion purchase of Vodafone’s 45 percent stake in the company. He also led the acquisitions of major media, fiber and telematics assets, including AOL Inc., Yahoo! Inc., XO Communications and the purchase of millions of miles of optical fiber from Corning Incorporated, as well as divestments of non-strategic wireline, tower and data center operations.

McAdam’s strategic focus on network investment vastly expanded Verizon’s capabilities and reach, from the rapid acceleration and deployment of 4G in his first year as CEO to the development of One Fiber/Verizon Intelligent Edge Network, enabling Verizon to be the first company to deliver 5G technology. Verizon set the standard with the nation’s largest and most reliable 4G LTE network and the broadest, fastest and most advanced next-generation network in the world. Today Verizon is positioned to further enhance growth opportunities on 5G network and digital media platforms.

McAdam informed Verizon employees of this succession plan earlier today in a video message that can be viewed here.

Full bios, photos and other materials can be accessed here.

Hans Vestberg, Chairman and CEO for Verizon, is scheduled to speak at the Goldman Sachs Communacopia + Technology Conference on Wednesday, September 14, at 12:15 p.m. ET.