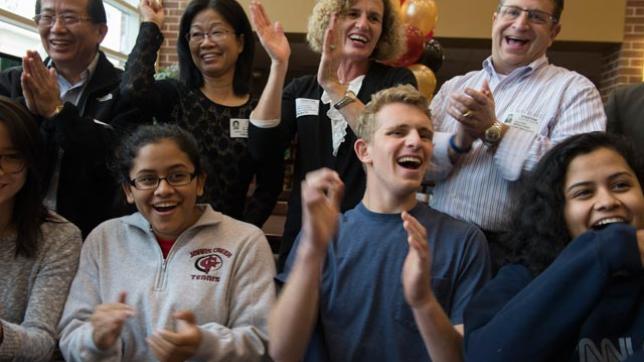 BASKING RIDGE, N.J. - The Verizon Innovative Learning app challenge – the no-coding-skills-needed contest that gives middle and high school students a chance to bring their problem-solving app ideas to life – is now accepting new app ideas for the 2016-2017 competition. The fifth annual challenge invites students across the U.S. to gather teams, dream up ideas, and create concepts for mobile apps that could solve problems in their schools and communities.

The app challenge is open to teams representing non-profit organizations in addition to public, private and parochial schools, who compete for the ultimate prizes: free tablets for each team member, up to a $20,000 cash prize to support their school or organization, and the chance to turn their app ideas into real, working smartphone apps that will be made available for download. Students can submit ideas from now until midnight on Nov. 18, 2016, and the winners will be named in January and February 2017.

Delivered by Verizon Innovative Learning in partnership with the Technology Student Association, the app challenge is a hands-on learning experience that aims to help students envision brighter futures for themselves as business owners, app inventors, coders and technology professionals.

Over the past four years the app challenge has produced some truly amazing apps that have now been downloaded more than 23,500 times. Winning app ideas have addressed a wide variety of problems, from navigation for the blind to feeding the homeless. In 2015, a team of middle schoolers from Pine Crest School in Fort Lauderdale Fla., came up with an idea for an app to help prevent concussions among athletes. The concept caught the attention of the National Football League and the students were recognized with a special invitation to attend the NFL’s annual meeting. The team’s story was also featured by CNN Airport and aired in 47 major airports across the country.

“When we first launched the app challenge five years ago, we couldn’t have foreseen the dramatic impact that it would have, not only on individual students but on entire schools across the country,” said Justina Nixon-Saintil, Director of Education for Verizon. “Now, after reaching more than 24,500 students and reviewing their amazing ideas, we have seen that this competition is truly about inspiring a new generation of creative thinkers who will apply passion, ingenuity and drive to solve problems and make a positive impact on our world.”

One team of middle-school students and one team of high-school students from every state and D.C. (provided there are qualifying entries) will win $5,000 for their schools, groups or clubs, and tablets for every team member as Best in State winners of the app challenge. From these submissions, twenty-four Best in Region winners will advance to the next phase of the competition, and have a chance to win the Best in Nation distinction. Eight Best in Nation teams will earn an additional $15,000 for their school or club and a chance to bring their app ideas to life with in-person guidance from experts at MIT.

For more information on how to enter and tips for creating the next winning idea, visit www.verizon.com/appchallenge.

Middle schoolers get high praise (and high fives!) for app that helps kids with autism

A group of six middle schoolers attended the White House Science Fair for their mobile app AutBuddy, designed to help kids on the autism spectrum.

A group of middle school students in Wyandotte, Michigan developed the Protect Our Parks app to keep parks safe, clean and friendly and entered the app into the Verizon Innovative App Challenge.