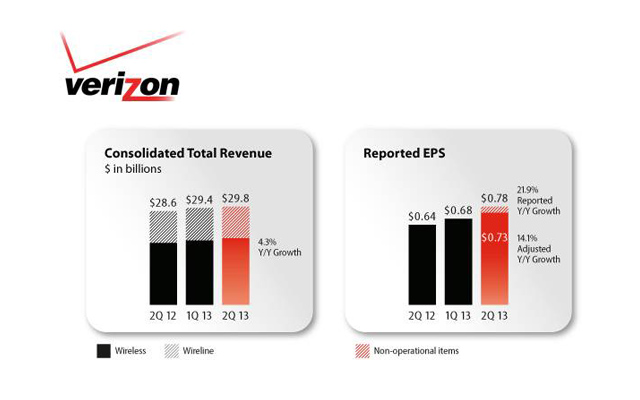 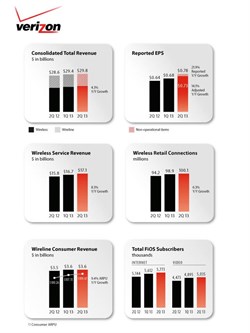 “Verizon’s consistent strategic investments in wireless, FiOS and global networks drove strong financial performance in the first half of 2013,” said Lowell McAdam, Verizon chairman and CEO.  “Having posted double-digit earnings growth in five of the last six quarters, we are focused on continuing to provide the best portfolio of products on the most reliable networks; capturing incremental revenue growth in broadband, video and cloud services; and sustaining our earnings and cash-flow momentum.”

In second-quarter 2013, Verizon’s consolidated results were highlighted by continued strong operating performance and profitable growth based on operating efficiencies and customer demand.

Verizon is increasing its capital spending guidance from $16.2 billion to between $16.4 billion and $16.6 billion for full-year 2013, as the company anticipates higher demand for wireless data consumption and begins deployment of AWS (advanced wireless services) spectrum in second-half 2013.

Verizon’s Wireline segment reported another quarter of FiOS customer, market share and revenue growth, leading to continued growth in consumer revenues.  In enterprise and wholesale, sales of global enterprise strategic services continued to increase and constitute a larger percentage of the revenue base.

NOTE: This presentation contains statements about expected future events and financial results that are forward-looking and subject to risks and uncertainties. For those statements, we claim the protection of the safe harbor for forward-looking statements contained in the Private Securities Litigation Reform Act of 1995. The following important factors could affect future results and could cause those results to differ materially from those expressed in the forward-looking statements: adverse conditions in the U.S. and international economies; competition in our markets; material changes in available technology or technology substitution; disruption of our key suppliers’ provisioning of products or services; changes in the regulatory environments in which we operate, including any increase in restrictions on our ability to operate our networks; breaches of network or information technology security, natural disasters, terrorist attacks or significant litigation and any resulting financial impact not covered by insurance; an adverse change in the ratings afforded our debt securities by nationally accredited ratings organizations or adverse conditions in the credit markets affecting the cost, including interest rates, and/or availability of financing; changes in our accounting assumptions that regulatory agencies, including the SEC, may require or that result from changes in the accounting rules or their application, which could affect earnings; material adverse changes in labor matters, including labor negotiations, and any resulting financial and/or operational impact; significant increases in benefit plan costs or lower investment returns on plan assets; and the inability to implement our business strategies.