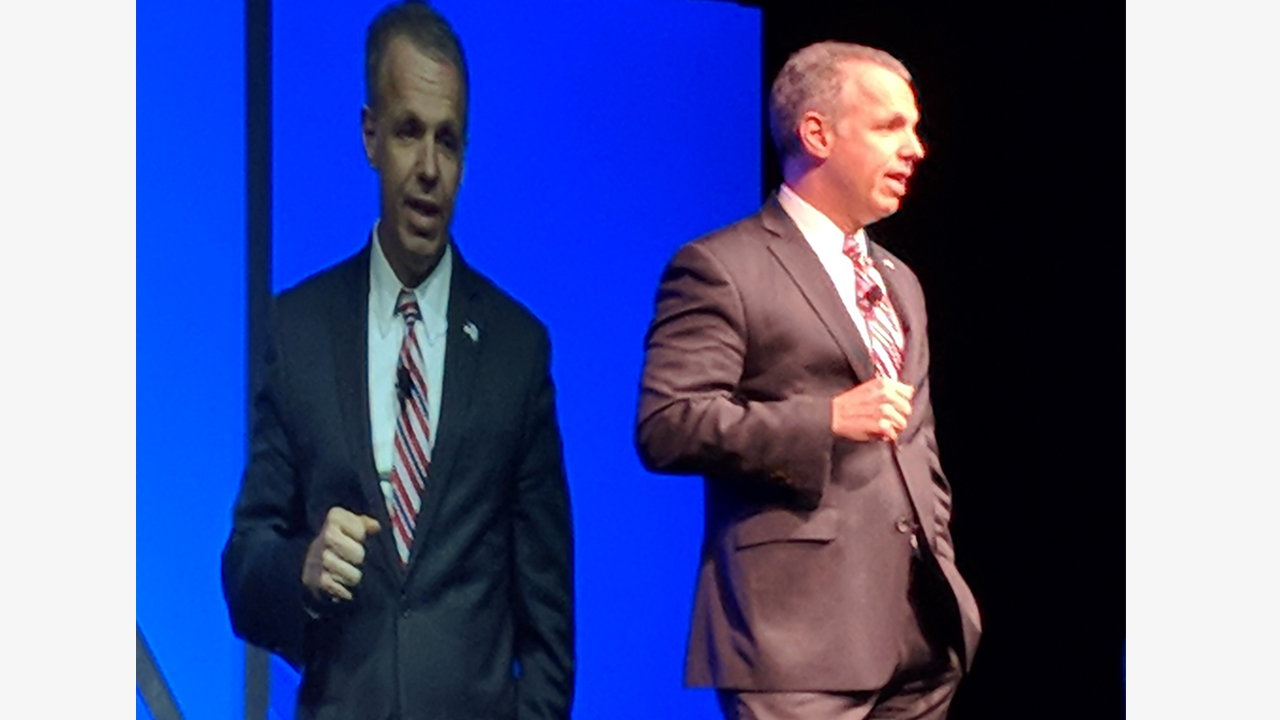 Mike Maiorana addresses 400-plus public safety officials during keynote at IWCE on March 7, 2018

ORLANDO, Fla. – Verizon’s senior vice president, public sector, Mike Maiorana, again reaffirmed Verizon’s commitment to public safety and highlighted the company’s network superiority during his keynote address at the 2018 International Wireless Communications Expo (IWCE) yesterday in Orlando.
“Verizon has a decades-long history serving public safety and we plan to continue doing that for the foreseeable future,” said Maiorana. “We believe public safety deserves the best technology on the best network.”
Maiorana focused much of his talk on the importance of a trusted, reliable communications network partner for public safety, noting that services like pre-emption, priority access and public safety-specific applications are only as good as the network they run on.
“Last year saw a number of natural disasters – hurricanes here in Florida, wildfires out west – Verizon received compliments from our public safety customers about our network performance,” said Maiorana. “We are proud of the work we have done – investing in our network, practicing response scenarios – to serve our clients, and through them the general public.”
Maiorana also pointed out that Verizon has a significant network performance and reach advantage over other providers. He noted that Verizon’s commercial network is consistently rated best for performance and reliability by multiple third-party rating agencies, and that Verizon has a 400,000 square mile advantage in US 4G LTE coverage over its closest competitor. That’s roughly the square mileage of California and Texas combined.
Maiorana made it clear Verizon was not planning to sit back and rest on its laurels. He outlined the company’s public safety-specific product and service offerings planned for release this year. The company will release its dedicated private core in late March and begin to migrate customers to the core beginning in April. Additionally, nationwide pre-emption capabilities will also be available by the end of the month, as will updates to the company’s Wireless Priority Service (WPS), including WPS for VoLTE.
Later in 2018, Verizon will debut a deployable-as-a-service program and an application ecosystem for public safety, built on open standards and accessible through any wireless service provider.
“We are committed to making sure public safety has the applications and other tools you need, on the best network,” said Maiorana. “And we’re already working with our public safety customers to build the solutions they need.”
Learn more about Verizon’s public safety services
Tags:
Emergency preparedness

Emergency preparation contacts and safety tips from Verizon
10.26.2018
As bad weather approaches, Verizon engineers and technicians prepare the network to ensure you can connect when you need to most.
An Extreme Network for extreme weather
01.03.2018
Verizon’s architects and engineers have designed and built a network that stands up to the most extreme circumstances – we call it our Extreme Network.
Accessibility Resource CenterSkip to main content
Services & Solutions
Support
Network Technologies
Innovation
Ad and Content Platforms
Follow Careers
facebook-officialtwitteryou-tubeinstagram