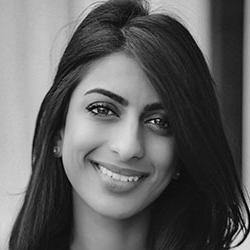 Komal Ahmad is the founder and CEO of Copia, an excess food management solution that enables businesses and event organizers to request pickups of their excess food for donation. Pickups are arranged via the web or mobile app, where users can also view data on surplus trends, make better buying decisions and access tax deductions, as well as receive photos and testimonials from the people that are fed with the donated food. The platform is responsible for recovering 900,000 pounds of food and feeding up to 2 million people a year.

What inspired you to do more new and do more good?

One day I was walking down Telegraph Avenue in Berkeley and encountered a homeless man begging for food, and something about him compelled me stop and invite him to join me for lunch. After sitting down with him, I learned that he had just come back from his second tour in Iraq and was waiting for his veteran benefits to kick in. He shared that he hadn’t eaten in three days. That hit home for me. How could someone who had selflessly sacrificed so much for our country come home only to face another battle, that of hunger?

Meanwhile, right across the street at the U.C. Berkeley dining hall, thousands of pounds of perfectly edible food were being thrown away. So, it was this very stark reality of those who have and waste, and those who are in need and starve—and these people existed literally right across the street from one another. I thought there needed to be a solution where people with food could say, “We’ve got food,” and people in need could say, “We need food,” and we could match these two people and clear the marketplace.

That’s essentially what we’ve built at Copia: a way to solve both hunger and food waste across America—and eventually, the world.