“Online selling is a different world than it was 10, or even 5, years ago,” says Kevin North.

He says the competitive battleground has expanded dramatically. “Today you have big brands making it hard for small merchants to compete. Amazon, Target, and everybody and their mother has some strategy on same day shipping. And there’s globalization: A merchant in the U.S. is now competing with merchants in China.” North adds, “The reality of becoming an online seller is that you’re competing with more merchants across the world and the biggest brands and retailers in the world.”

Meanwhile, large merchants who sell a lot are the ones marketplaces like eBay want most to attract, North points out. After all, eBay is driven by revenue and earnings. 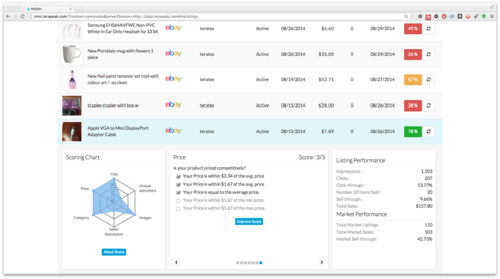 As CEO of Terapeak, a company with inside access to eBay’s transactional data, North knows well how things have changed. We reported earlier on how Terapeak helps ecommerce merchants boost their sales. And here North shares what would-be sellers should consider before entering the ecommerce fray.

1. Start with a competitive edge. Says North, “I always say start with something you are passionate about or have knowledge of from your previous career. Selling on eBay is hard and you can get discouraged quickly, especially if you’re not passionate about what you’re selling. You can also give yourself a head start by having not just product expertise but industry expertise. Having relationships in the industry, an understanding of the uniqueness of certain products, and knowledge of the supply and demand gives you a competitive edge going into it.”

2. Keep it simple. “Don’t try to sell too many products at once. Don’t have a big catalog right away,” North says. “You don’t want to have excess inventory in your early days. That’s terrible. It’s far better to experiment, understand eBay, develop relationships with buyers, and then start expanding and understanding supply and demand and seasonality in the marketplaces. Only experienced sellers understand the ebbs and flows. It’s best to learn them without a lot of inventory risk.”

3. Understand sourcing. North says there is nothing more important than the sourcing process. “Make sure you get the most competitive price when you’re buying, right from the beginning. Know what to buy, what’s unique, and what’s in demand that warrants you going out and sourcing.” He gives a plug for the Terapeak app: “If you’re shopping online or at an estate sale or warehouse sale, it’s nice to be able to look at the app on your phone and see if that merchandise is selling on eBay. You may decide to pass on a particular SKU because you can see how it trends on eBay.”

North says the most successful merchants develop their sourcing channels early on. “If you look at the largest merchants on eBay, you find they have well established and rewarding channels and supply chains that let them sell competitively.”

Smart sourcing also enables small merchants to be competitive on shipping. North warns: “You’re going to have it tough competing with big merchants on shipping. The margins ultimately are going to be determined by your sourcing process. If you bought high, it’s hard to sell low. If you bought low and you know it was low and you know the product is in demand, you’re going to be far better off. You can compete on larger margins and take advantage of the lower price you paid early on.”

4. Research the competitive environment. It’s business 101, but North’s point here is to say that Terapeak’s tools offer subscribers a view of the competitive landscape. “A lot of merchants use Terapeak to understand the tricks of the trade through the efforts of successful sellers,” he says. “You can understand what big and small merchants are selling and see that a successful competitor down the street is selling a lot of volume, see their price points, and price your products accordingly.”

5. Be visible. Marketing is a challenge whether you’re an ecommerce business or a bricks and mortar store. “Having your listings found on eBay is among the most difficult challenges,” North says.

“Classic marketing problems are being solved,” he says. “It could be your title, your listing, or that you’re missing keywords—things we’ll call SEO related. Optimizing your listings on eBay is huge.”

And in the world of ecommerce, you need every competitive advantage you can get.