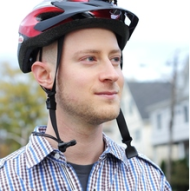 Not to jinx him, but Jonathan Lansey seems to be on track to exceed the $43,000 goal of his first crowdfunding campaign. With 2 weeks to go in the 5-week Kickstarter initiative, he’s nearly 90 percent there, having raised an average total of $1,600 per day so far. More than 400 of Lansey's 441 backers pledged at least $79 in order to win the product he invented: a car horn for a bicycle.

As crowdfunding becomes an increasingly popular way for entrepreneurs and inventors to raise startup capital, Yahoo! Small Business Advisor asked Lansey about the strategies that he thinks helped him win $38,000 in pledges in less than a month.

Like many successful inventions, Lansey’s was borne of necessity. In good weather, the 27-year-old research engineer commutes by bicycle 17 miles roundtrip between his Boston home and his job in Woburn, Mass. When a run-in with a car sent a biking buddy to the hospital, Lansey began thinking about how to make city cycling safer. “I’m alert when I drive a car and I’m ready to honk the horn,” he says. “But on a bike it’s like you’re helpless and there’s nothing you can do if a car is going into your path.”

Lansey searched for a loud bike horn, but the few versions he found sounded grating and unrecognizable, he says. He studied mathematics in college and neuroscience in grad school, but he applied his engineering DIY skills to develop Loud Bicycle, a car horn for your bike. It was a short leap, he says, from thinking “I’ll throw a horn on my bike, it will be fun,” to realizing that it worked so well that other bikers might want one too.

He developed and tested several prototypes over 9 months before looking to raise capital for mass-manufacturing a bicycle-mounted, finger-triggered horn that sounds exactly like a car horn. His Kickstarter campaign ends on January 13. Assuming he reaches his $43,000 goal in order to collect the donations and start production, these will have been six keys to his fundraising success:

1. Make a product people want to buy. Despite what some say, enticing people to pledge dollars to your idea isn’t about great marketing or a compelling pitch video, Lansey says. It’s about the product. “You’ve got to make sure that what you’re selling solves a problem and makes sense or is beautiful—that it is something people want,” he says.

People looking to make their bike rides safer can spend another $100 on bike lights without seeing much improvement. But, he says, “Our horn makes so much sense that people ask, 'Why hasn't this been done before?' That is a great sign. If people ask, 'Why are you doing this?' then crowdfunding might not be a good idea.”

Lansey adds that Kickstarter is an ideal way to demonstrate that a market for your product exists. “Everyone says it’s a great idea, but will people really buy it?” A successful Kickstarter campaign will show you that people see a value, he says.

2. Tap your network for help. Being an engineer in Boston, Lansey knows people who have run successful crowdfunding campaigns, so he asked them for tips. And as a trustee of the Boston-based Awesome Foundation, which gives $1,000 grants to support great ideas worldwide, he knew who to ask about how to get his horn prototype manufactured. “Most people who go on Kickstarter don’t have existing contacts in manufacturing,” Lansey said. He was fortunate to be put in touch with plants in China and North America that had previously worked with Kickstarter-funded businesses.

3. Know how much money you need to raise. Those manufacturers were able to help Lansey figure out his production costs, but he also tapped an entrepreneurial friend at MIT’s Sloan School of Business as well as his own father, a businessman, who helped him make sure all the numbers added up. “The minimum fundraising goal we set will let us be sure we will be able to get those horns made and delivered to our funders,” he says. That’s crucial: Kickstarter holds fundraisers accountable for fulfilling promises, Lansey says. “If we don’t deliver, we’re legally required to refund the money. And if I don’t deliver it would ruin my reputation.”

4. Be prepared to scale up production. Kickstarter outfits have been known to run into problems with scaling their product manufacturing when demand exceeded expectations. “Our manufacturer has a huge amount of capacity,” Lansey says. “We can take bulk orders, and if it’s a huge number of orders it will bring our costs down.” He’s already in talks with a few bike shops and distributors about how to maximize the product’s reach to consumers. And he’s investigating the procedures for clearing electronics certifications in Europe. Products delivered in exchange for Kickstarter pledges are considered gifts, not direct sales, so, at least for meeting the campaign demands, he says, “you don’t need to worry about the nitty gritty” of international standards and certifications. But for mass distribution, it’s a hurdle to be aware of.

5. Seek and respond to feedback. Lansey has solicited input from all corners: “Cops I’ve asked think it’s a good idea” he says, and taxi drivers were supportive too. By engaging with his backers through the Kickstarter comment channel, Lansey was able to explore ideas about whether the horn or the batteries or even the on-off switch should be removable to avoid tampering. An overseas backer promised to pledge an additional $95 if Lansey would ensure the batteries would be universally rechargeable. And others mentioned they were buying the horn for a moped or baby stroller, hinting at alternative markets or product extensions.

6. Let your passion drive you. In his 9 months using the horn, Lansey has had only good experiences that confirm his commitment to making his invention available to fellow bicyclists. The horn has “definitely” saved him from a few accidents, he believes. He once honked at a texting driver who was swerving into the bike lane. “The guy rolled down window and thanked me,” Lansey says. One driver yelled at him, “You’re not a car, sir!” But that encounter confirmed the idea that a bicycle horn that sounds like a car horn will get drivers’ attention. Lansey says, “A lot of people say ‘I love to bike but I would never do it in Boston.’ I hope this horn will allow a lot of people in that category to feel like they’re more part of the traffic and to have the confidence to hold their own on a bike.” And it looks like he just might make some money for his efforts.