A great pastor/writer I know once told this story:

A guy with a large black Bible clutched under his arm rode the bus I was on. At once, I noticed that peculiar glazed look on his eye and the friendly smile on his face—and I knew it wouldn’t be too long before he’d make his first move. In my next breath, bingo, he cornered his first victim—a college girl beside him—with the question asked in a typical preacher’s modulated voice, “Friend, are you saved?” When the woman turned away, undeterred, the zealous evangelist turned next to the fiftyish man in front of the woman and inquired, “Do you know Jesus Christ?” This man signaled the driver to stop and got off immediately. I shivered when I realized I was the only passenger in the bus left to talk to. We smiled at each other and I wondered what his opening line would be. “Friend, if you die right now,” he asked with utter seriousness, “do you know where you would go?

They conversed for a while but the writer eventually regretted allowing the conversation to happen. He then stepped off the bus. As he watched the vehicle roar away, the evangelist was now talking to the driver. He then told his readers: “I admire guys like him. Their zeal, their sincerity, their courage to talk to total strangers. But it’s the same type of admiration that one has for killer sharks. As long as you see them from a distance, or on TV, that’s fine—you admire their strength, their speed, their raw power. But my admiration never makes me want to swim with them in the same pool.” 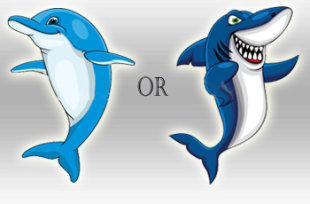 Is Your B2B Telemarketer A Dolphin Or A Shark?The same can be said for telemarketers who completely disregard their sales leads during a call. When using telemarketers for your b2b lead generation campaigns, did you hire dolphins or sharks to perform your b2b telemarketing campaigns? Who are the telemarketing sharks? These telemarketers start their sales pitch right at the beginning of the call and keep talking, without even asking if the prospective lead has the time to listen to (or even care about) his offer. The calls made by these sales representatives are usually monologues, and they often get into arguments with their prospects because they keep forcing their offer on to the business lead. There isn’t a prospect whoever wants to hear a telesales representative shove a telemarketing script down their throat, and that’s all that telemarketing sharks do. 20 years ago, this aggressive style of marketing would have worked. But now that business people have more options through the internet, aggressive marketing is generally frowned upon.

Have you listened to your cold calling campaigns lately? So, are you employing telemarketing sharks or dolphins?