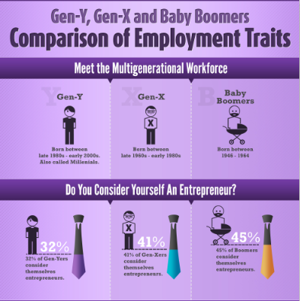 Millennial Branding study data by Monster, with icon and graphics by CharfishDesign

Widespread technology access has eliminated many barriers to starting a new business in the past decade. And with 20-something business founders like Facebook’s Mark Zuckerberg and Rent-the-Runway’s Jennifer Hyman dominating headlines, it’s easy to believe that Generation Y youth have not just easier access but more entrepreneurial chutzpah than their baby boomer parents. But a new survey debunks that notion.

Monster.com and Millennial Branding, a Gen Y research and consulting firm, found in a survey of more than 2,800 Monster users that 45 percent of Baby Boomers (typically defined as the group born between the mid-1940s and mid-1960s) and 41 percent of Gen-Xers (born mid-1960s to early 1980s) consider themselves to be entrepreneurial. Only 32 percent of Generation Y (born early 1980s to early 2000s) respondents do.

Members of Gen Y also confess to being less comfortable with risk than their elders. Only 28 percent of Gen Y respondents identified with being “high risk,” compared to 40 percent of Gen X and 43 percent of Boomers.

More than half of Gen Y respondents also indicated that they consider their current employer a “step” in their career path; only a quarter of them agreed or strongly agreed that they intend to stay with their present company for a long time.

Younger workers tend to be drawn to the freedom and autonomy that startups and small companies allow, but that doesn’t necessarily mean they want to run one. Instead, Gen Y-ers like the concept of intrapreneurship—“or taking direct responsibility within a large corporation for turning an idea into a profitable finished product through assertive risk-taking and innovation”—Millennial Branding suggests.