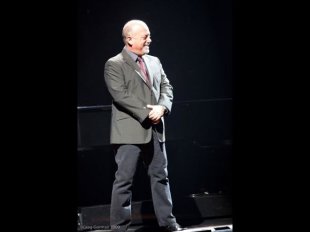 Billy Joel And The Audacious Power Of Asking

If you haven’t seen this video yet, you need to take the six minutes and nineteen seconds to do that now.

Go ahead. Do it right now. I’ll wait.

What Most Of Us Are Afraid Of

I didn’t want you to watch it to see them perform together. I did it because it’s a powerful example of something that most of us are afraid to do: ask for something.

It was filmed during “An Evening of Questions and Answers and a Little Bit of Music” at the university in January 2013.

During the “Question And Answers” portion Billy is standing there taking questions and Michael Pollack stands up to ask a question.

But it’s not just a simple, expected question.

He has the nerve to ask an audacious and bold question: ”Can I play ‘New York State Of Mind’ with you?“

And, after a half-second pause, Billy says simply, “Ok.”

The Guts To “Ask Big”

Can you imagine the guts it took for Michael to ask Billy Joel if he could play that song with him?

I imagine he must have gone back and forth in his mind wondering, “Should I or shouldn’t I?”

But finally in the moment when he had the spotlight, Michael decided to go for it and ask BIG.

It is also a moment that is now being shared online and inspiring many others to ask bravely.

Waiting For The Answer To A Question We Never Ask

Most of us don’t do what Michael Pollack did. Not only do we not ask big, we don’t ask at ALL!

Look, sometimes waiting around and hoping, waiting, and expecting will produce results.

But USUALLY it doesn’t.

And if it does produce results, they’re usually NOT the results, answers, or permission we really wanted.

Sometimes the only way you will RECEIVE is if you ASK.

The Worst Thing That Can Happen

What? You say you’re scared to ask? So am I!

What’s the worst thing that could happen if you ask?

You might not get what you asked for. But if you think about it, that’s not really any worse of a situation than the one you’d be in if you didn’t ask, right?

But what’s the best thing that could happen?

You might get not only what you wanted, but more than that.

But wait. Don’t stop there.

What’s the worst thing that could happen if you DON’T ask?

The worst thing is that you will miss out on something you could have had or experienced – if you only would’ve asked!

Not receiving something that you never could have had anyway isn’t a big deal. But missing out on what you actually could have had seems to be a very sad result of being too afraid to ask!

And do you realize that there is only one way you can actually know what you could have had or could have experienced?

Yep. You guessed it.

The only way to know is by asking!

You need to be ready like Michael Pollack was. He had practiced and prepared for that moment, so when he got what he asked for he was ready.

2. Be careful what you ask for.

You might just get it. And not everything we want and desire is always what’s best for us.

Just because you’re told “No” once doesn’t mean you will be told “No” a second time… or even the FIFTEENTH time. Maybe you weren’t ready the last time. Maybe the stage wasn’t set for you. If what you’re asking for is really important and really worth it, then ask again and again and again!

My Challenge For You:

This week have I want to challenge you to have enough courage to ask for ONE thing you need, want, hope for, or expect. And for bonus points, make that thing a BIG THING!

“21 Types Of Content We Crave” Webinar: Why Boring Isn’t Memorable And What You Must Do About It