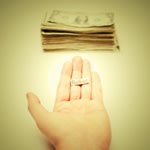 Broke States May Have No ChoiceThe U.S. national debt is a major issue. And as time passes, this issue brings the country’s sovereignty into question. Our national debt—the money owed by the U.S. government and, ultimately, the taxpayers—stands close to $17.0 trillion and growing. (Source: Treasury Direct, last accessed April 19, 2013.)

Sadly, the federal government isn’t reining in spending in any meaningful way. It has posted a budget deficit of over one trillion dollars over the last four years. It won’t surprise me if we see another one-trillion-dollar budget deficit this year.

My concern: the economic problems at the local levels are threatening to increase the national debt even more.

States and cities across the U.S. economy are each posting an increased budget deficit; some are in severe distress, while some have already filed for bankruptcy. Just look at Stockton, California; Jefferson County, Alabama; and, most recently, Detroit, Michigan—the “Motor City” was taken over by the state, because it wasn’t able to control its budget deficit.

A study by Public Financial Management, Inc. (PFM) found that Baltimore, one of the biggest cities by population in the U.S., will amass a budget deficit of $744.8 million over the next 10 years. On top of this, as of 2011, the city has unfunded liability of $3.2 billion—this includes a pension deficit of $1.1 billion and $2.1 billion of costs in health care and other benefits. (Source: Reuters, February 11, 2013.)

Illinois has a multibillion-dollar budget deficit problem. And the state has one of the least-funded pension systems—it sits at 39%; 80% is considered a healthy level. (Source: Yahoo! News, February 13, 2013.)

When states and cities run out of money, they will be forced to go to the federal government to seek a bailout. As a result, the national debt could spring to much higher levels than most are anticipating.

The U.S. government has been spending with two hands and borrowing money to pay for its expenses from the Federal Reserve. Dear reader, this can only go on for so long. Our national debt is reaching a very dangerous level. Looking at it from a nominal value, the U.S. holds the most debt in the world.

The U.S. government may still be able to borrow for now, but our creditors will sell the U.S. debt they hold if they find the dollar is simply becoming worthless. If that happens—and I believe it eventually will—there will be tremendous damage to the financial markets.

These are not the only two countries in the global economy that are facing declines in their exports. Japan, one of the world’s major exporters, is facing troubles as well—the central bank of Japan is continuously printing paper money in the hopes of achieving economic growth.

The ultimate truth behind exports falling, dear reader, is nothing but bleak demand in the global economy. Consider the stock chart for the Baltic Dry Index (BDI) below. I look at this index as one of the key indicators of demand and exports.

This indicator, since the financial crisis of 2009, has been screaming that there is no demand in the global economy. As a matter of fact, the BDI hasn’t recovered since its steep decline in 2008.

Unfortunately, as the conditions in the global economy continue to deteriorate, the key stock indices continue to rise. This may suggest that there is economic growth, but the underlying economic numbers and other indicators are suggesting the complete opposite. Don’t get lured into the stock markets; they are only rising because of extensive paper money printing.

Before seeing any economic growth in the global economy, I believe that we will see economic conditions worsen first. U.S.-based multinational companies, such as Caterpillar, are already seeing the effects of slowing demand; soon, others will follow.

“I’m getting very worried about the state of the U.S. housing market and its ramifications on the economy. The U.S. could be headed for its first outright annual decline in home prices on record, adjusted for inflation. And I really believe this could be a catastrophe for the U.S. economy.” Michael Lombardi in Profit Confidential, August 2, 2006. Michael started talking about and predicting the financial catastrophe we started experiencing in 2008 long before anyone else.