Chef Ming Tsai is the Emmy award-winning host of the public television cooking show Simply Ming and owner of the Blue Ginger restaurant in Wellesley, MA, which is celebrating 13 years of success.  Chef Tsai is also an online businessman, with a thriving ecommerce site, mingspantry.com, built on the Yahoo! Small Business ecommerce platform. Chef Tsai has also had several products featured on Oprah’s Favorite Things and is a curator on OpenSky.

We asked Chef Tsai about his experience starting a business and the keys to his success. Here’s what he had to share. 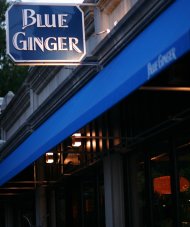 You can learn more about Chef Ming Tsai, his restaurant, TV show, and other endeavors at ming.com or follow him on Twitter @chefmingtsai. You can also follow Tsai's restaurant and television show, Simply Ming, on Twitter: @blue_ginger and @SimplyMingTV.