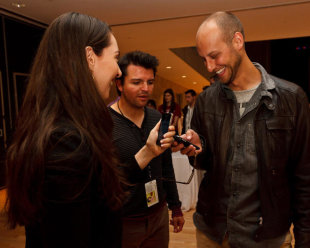 Maybe it’s the result of being born in Mexico City, raised in New York City, carrying an Irish passport, and living in Berlin, Copenhagen, Eindhoven, London, and San Francisco by age 34, but Adrian Avendano is obsessed with meeting and collaborating with new people.

So, as a software engineer and self-proclaimed hacker, he set out to master the science of connecting: What conditions need to exist for like minded people in a crowd or a city to find each other and create something together?

With his partner and fellow hacker Ellen Dudley, an Irish biomedical engineer, Avendano developed an iPhone app called PeopleHunt that aims to facilitate useful human introductions. A bit like Meetup, but for enabling spontaneous, one-on-one interactions, the app has spawned numerous business and personal relationships among more than 2,500 users. It has also captured $40,000 in equity-free financing, and sparked interest in the Bay Area investment community, he says.

With the slogan "life's a journey; hunt the awesome," Avendano says PeopleHunt aims “to help people find each other so they can create or make something.”

A new series of online videos highlights the kinds of connections he’s talking about, such as the way acommunity of makers came together via the Internet to build an underwater robot, or the way filmmakers find each other at the events that Deirdre Haj, executive director of the Full Frame Documentary Film Festival, carefully curates for her industry.

Avendano says the idea for PeopleHunt originated with his desire to extend the collaborative nature ofhackerspaces to other creative communities. He and Dudley designed an early version for use at conferences and events. Attendees could download the app and, within 90 seconds, make new contacts whose interests matched theirs.

“Say you went to a journalists’ meeting in Germany, and you wanted to find people who know how social media is being used to stage protests in the Middle East,” Avendano says. “It’s a lot of work to find the five people in the room who might be experts on that topic.” But if everyone at the meeting usedPeopleHunt, your networking could be streamlined.

Event goers, he noticed, used the early app to share knowledge with each other. The current version goes a step further to connect people who want to build or make something together. “People care about connecting to share information,” he says, “but even more enticing is finding someone to makesomething with.”

For now, Avendano and Dudley are building their company South America. Four months ago, they were accepted into Startup Chile, a program of the government there (and the source of their $40,000 financing), which invites entrepreneurs from around the world to relocate to Santiago for 6 months. It is part of a strategy to develop Santiago as the innovation capital of the continent, and Avendano says the nature of the initiative has helped to confirm his thinking about the value of his app.

To be sure, Avendano is not arguing that technology can substitute for face-to-face interactions. Instead, he says, mobile technology “can facilitate us finding the right person who we should be talking to, and discovering if they are open to connecting; that’s when the face-to-face should happen.”

How will he make money from the endeavor? Avendano says he sees “several avenues right now.” One is to enable users to use the platform to purchase and send thank you gifts to collaborators. But a more promising idea was inspired by a common response he gets from new users: “People write and say, ‘I downloaded PeopleHunt. It’s amazing. I love it. I would like a version for my own professional community.”

Avendano explains, “That’s because no other mobile networking apps surface the knowledge people have in a community like PeopleHunt does. For animators, for example, it would be interesting to discover who knows how to use this new tool to make a cartoon.” PeopleHunt could charge trade associations or professionals within a particular industry a subscription to access a sealed-off version of the app.

Just this week, he says, St. Johns University in New York signed on to use an exclusive version of the app to connect members of its alumni network to each other.