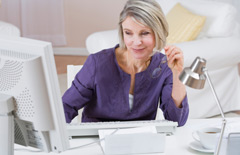 Roughly 8% of entrepreneurs in early-stage startups are older than 65, and 18% are over the age of 55. That data was released in November in the study "Global Entrepreneurship Monitor (GEM) 2010 National Entrepreneurial Assessment for the USA," conducted by Babson College and Baruch College.

Another survey released in November suggests that 1 in 4 Americans aged 44-70 are interested in starting businesses or nonprofit ventures in the next 5-10 years.

Of those potential business owners, 58% say the current economic crisis makes them more likely to create their own venture, despite doubts about startup funding. Nearly as many (47%) said they expect to tap into personal savings to launch their ventures.

The data comes from Civic Ventures, a think tank on boomers, work and social purpose. The findings support earlier research by the Kauffman Foundation that Americans between the ages of 55 and 65 often had the highest rate of entrepreneurial activity of any group.

"In a sea of bad economic news, it's heartening that millions of people with experience want to take matters in their own hands and launch their own ventures to meet social needs in their communities," said Marc Freedman, founder and CEO of Civic Ventures and author of The Big Shift: Navigating the New Stage Beyond Midlife.

Getting Ready to Start a Business

Steven Carey, a former Air Force fighter pilot who retired as a colonel after more than 30 years of service,  started  CertaPro Painters in 2008 in the Mobile Bay area of southern Alabama. He recommends that would-be entrepreneurs do the following:

* Take a behavioral test that assesses your strengths and weakness. It will help you determine your suitability for running a particular business.

* Call five business owners in your local area who have demonstrated success. Sit down over lunch and listen to their story.

Lynn McBride, 61, became a freelance writer after she and her husband moved to France. She writes for British travel magazines and started a monthly subscription blog called Southern Fried French, about her new life living in a chateau with a French couple. Her tips for getting ready to start a business:

* Research your subject exhaustively. The Internet makes this very easy, so take advantage of it.

* Use social networking to your advantage. "Even if you're not part of the younger generation, you will still need it, and it can be learned," McBride said.

* Keep in mind that marketing your business can take as much time, or more, than actually doing the work.

Check the Get Started section of Yahoo! Small Business Advisor for more resources to help with starting a new business.