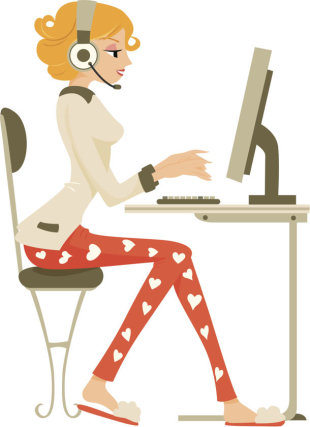 Working for yourself from home is not just a trend to get those who might be "between jobs" through the recession, but is a new way of work that is here to stay. That's according to surveys out this week from two freelancers' marketplaces that contain some surprising data about who's using freelancers and which types of freelancers are having the most success.

oDesk says businesses have spent more than $1 billion to conduct work using its "online workplace" platform, which features more than 4 million registered freelancers offering more than 2,000 different skills. oDesk CEO Gary Swart says the platform, which has been ranked largest by Staffing Industry Analysts, is "especially empowering startups in emerging hot spots." oDesk data show that 58 percent of hires on its platform are made by businesses that call themselves startups.

Also surprising is a finding from Rev.com, another online services marketplace, that indicates those without a college education earn more than their higher educated work-from-home counterparts. Freelance workers without any formal education beyond high school work the most, with monthly earnings nearly three times that of their counterparts with a graduate degree, Rev reports. The company will publish results of its recent survey on Thursday.

Rev's survey also found that 93% of workers age 50 and older deliver work on time, while 86% of those 49 and younger are that reliable. Older workers also work more hours, earn 30% more per month than those under 30 (with normalized pay rates), and produce the same quality of work (all ages average 4.5 out of 5 in quality score).

Rev.com CEO Jason Chicola says most office workers "would jump at the opportunity to work in their pajamas, skip the commute, and keep their kids at home." In fact, only two percent of Rev survey respondents claimed to be freelancing because they are unable to find a traditional job. "We’re seeing more and more freelancers who turn to freelancing as a long-term lifestyle choice, and have no plans to ever set foot in an office again," Chicola says.

Staffing Industry Analysts predicts that the market for online workers will grow to $2 billion by 2014. "Work is no longer a place," says oDesk's Swart.