Not exactly an inconsequential update. 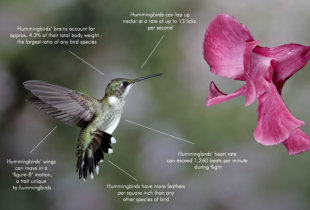 This image has nothing to do with Google Hummingbird. Still, hummingbirds are pretty cool.

The Hummingbird update was the most ambitious adjustment of Google’s search algorithm since 2001. In today’s post, we’re going to look at what Google Hummingbird is, what it means for SEO, and what the future of Google’s quest to become the “Star Trek” computer could hold.

What is Google Hummingbird?

Although it’s technically accurate to call Google Hummingbird an algorithm update, this is kind of a misnomer. This is because Hummingbird was essentially an entirely revamped version of Google’s search algorithm, not just a patch or minor update.

At the heart of the Hummingbird lies the all-important concept of semantics, or meaning. Even the fanciest computers are still pretty stupid. This is because although it’s easy for humans to distinguish between two different yet similar concepts (by virtue of context), computers can’t do this unless they’re explicitly told. Stupid computers.

Semantic search is the concept of improving search results by focusing on user intent and how the subject of a search relates to other information in a wider sense, or its contextual relevance. Essentially, semantic search focuses on determining what a user really means, rather than a string of keywords, and then serving relevant results.

For example, if a user performs a search for the term “weather”, it’s much more likely that they are looking for a forecast for their area, not an explanation of the science or history of meteorology.

So, in this example: 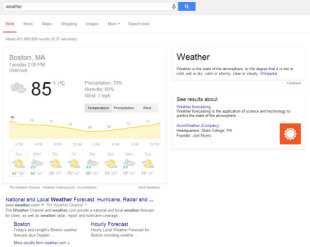 Of course, Google’s algorithm cannot be absolutely sure of what I want, so just to be safe, it provides me with a range of results. Google serves up a local forecast (even though this search was performed in an Incognito window, it still tracks my location), a link to the Weather Channel, a Wikipedia page for the term “weather” and some other information. Still, the prominence of the local forecast data in the Knowledge Graph speaks volumes about Google’s confidence in its results.

The semantic web is a largely unrealized vision of an internet based on common standards. Imagine if every website featured structured data such as schema, and that new technologies were developed to read, retrieve and publish data based on common data models. The result, a semantic web, would be an internet in which machines could perform much of the heavy lifting associated with search by truly understanding and responding to user queries, rather than the comparatively fractured web we have right now.

Although the scope of the semantic web is way beyond the scope of this post, Sir Tim-Berners Lee’s article in Scientific American is a fascinating read if you’re interested.

Google Hummingbird and the Knowledge Graph

When researching this post, I wanted to know how many Google searches are performed every day. Prior to the rollout of Google Hummingbird, I would have been presented with a SERP containing links to numerous pages, through which I could have probably learned the answer.

Google realized that this was a slow and often irritating process, even for users who were presented with relevant results. Google Hummingbird makes search quicker, easier and more intuitive. 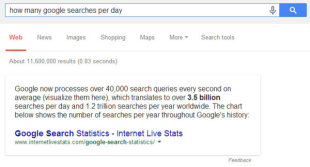 See how the answer to my question is bolded, rather than the “keywords” in my query? That’s because Hummingbird assumes (correctly) that all I want is an answer, pure and simple. I don’t need a link to a blog with the top 1,000 Google facts nobody knows, or even an official Google page boasting about its daily search volume – I just want the answer.

The same principle applies when I want to know exactly what 90% of 3.5 billion is. I don’t want to be taken to a calculator website or app. I just want the answer right now, damn it. 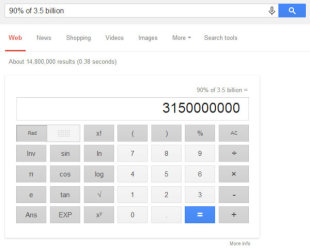 This is what makes the Knowledge Graph so powerful. It’s also what pissed so many webmasters off when the Knowledge Graph was first introduced, since it meant that users no longer had to click through to even a top-ranked site, as Google “helpfully” provided the answer to the user without forcing them to leave the SERP.

Optimizing pages and sites for Google Hummingbird is really simple. Like, so simple that even a stupid computer could do it. Okay, maybe not that simple, but it really is pretty straightforward. All you have to do is create great content that your audience wants and finds useful, and enriches their overall experience. Easy, right?

You should probably be doing most of the following anyway, but if you’re not, now’s an excellent time to get started and it’ll make your site Hummingbird-friendly. Just like hanging a feeder full of sugar water out on your back porch. See what I did there?

Anyway, let’s look at some best practices for Hummingbird SEO.

We know that long-form content can work exceptionally well as part of a wider content strategy, but if every single post you publish is a 3,000-word monster, you may not be meeting all of your readers’ needs. For this reason (and to get something done other than write mammoth blog posts), mix up the length of your content. Intersperse shorter articles among longer ones, and don’t be too pedantic when it comes to word count – remember, there’s no “perfect” post length, only the length an article needs to be.

In-depth long-form articles are an excellent way to explore complex topics and a range of ideas in a single post, but sometimes, people don’t want to read the marketing equivalent of Ulysses. In fact, sometimes they don’t want to read an article, of any length, at all. This is when visual content shines.

Infographics, videos and even simple visual elements such as charts and graphs can add some much-needed spice to your content. In addition, they’re often easily skimmable, can illustrate highly complex ideas effectively and bring some color to your site.

Something that some sites fail to take advantage of is using industry-appropriate language in their content. This is sometimes done out of a fear of alienating potential readers who may not be familiar with a certain topic or area. However, writing content that includes appropriate terminology can demonstrate to Google that your site is authoritative and valuable. 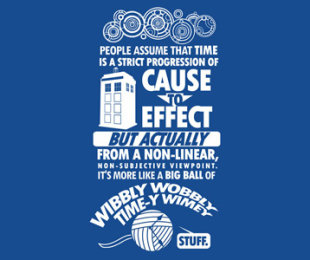 Remember when Google said that schema isn’t a ranking signal? Well, although this still appears to be the party line, implementing schema markup or another microdata format can only be a good thing, especially with Google Hummingbird’s heightened focus on semantics.

As we discussed in a previous post about schema markup, implementing it can be kind of a pain, but it could be worthwhile in the long run. In addition to making your site friendlier to the search engines’ crawlers, it could also help you secure better rich snippets in the SERPs.

The Future of Google Hummingbird

So, what does the future hold for Google Hummingbird and semantic search? Yes, this is where we peer into the murky waters of The Future™ and make some bold predictions that we can refer back to in a year or two and say, “See? We told you so.” 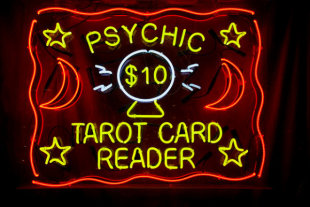 Many experts speculate that developments in the field of natural language processing – the process by which machines can effectively parse and interpret human speech – will become a driving force in the advancement of semantic search. You only have to look at how accurate Google Now has become since its introduction to see that natural language processing is going to remain a major part of Google’s plans for search.

All signs point to not only further R&D in natural language processing, but to pairing this technology with increasingly sophisticated artificial intelligence systems. This was evidenced recently by Nokia’s acquisition of Desti and Medio Systems. Desti, a technology that combines natural language processing and artificial intelligence, was developed by SRI International, the company behind Apple’s Siri and Nuance, one of the world’s leading voice recognition systems. Medio Systems is a predictive analytics company that specializes in processing data to effectively anticipate what information people will want to provide increasingly timely data.

Google isn’t wasting any time, either. The company’s acquisition of navigational software product Waze for $1.1 billion, and its subsequent integration into Google Now reveal that real-time, location-based search results are a high priority for Google. The hiring of renowned futurist and technologist Ray Kurzweil in 2012 was also a strong indication of Google’s plans for the future of its engineering efforts.

Simply put, if Google and other semantic search engines are going to serve our needs, they need to understand what we’re saying, the context in which we want our information, and where/when we want it.

Google made an ambitious (and some would say risky) bet with its Glass wearable computing product. A favored argument of Google Glass detractors is that people don’t want to walk around talking to their eyewear for fear of looking stupid. While this may be true for the time being, remember how people were reluctant to speak on their cell phones in public not so long ago? That didn’t last, and neither will the apprehension about wearable tech. 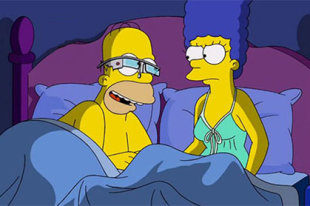 As the price point of wearable technology falls, adoption will rise. This, in turn, will further drive the development of technologies that combine voice recognition with minimally intrusive devices that enrich the world around us and make our lives easier. I predict that within the next five years, wearable technology and semantic search will become increasingly commonplace, with consumer adoption (and eventually, demand) leading the way.

Going Beyond Semantic Search with the ‘Internet of Things’

So, if semantic search can help us find exactly what we need with minimal effort, what’s the next logical step? For the world around us to respond intuitively to our needs, of course. This is what the so-called “internet of things” is all about.

Let’s say you want to schedule a trip to Amsterdam. Using voice commands, you instruct your virtual assistant – say, Google Now – to make the arrangements while you go about your day. Google’s AI performs millions of computations to calculate the best fare, suitable dates based on your (cloud-based) calendar, pays for your flight and hotel bookings automatically, and sends you a notification that everything has been taken care of – but it doesn’t stop there. Google’s virtual assistant then communicates with the technology in your home to ensure that their thermostat in your house is set correctly for a period of prolonged absence, as well as your fridge to temporarily pause automated alerts notifying you that food is about to spoil and inform you of which items should be disposed of before you leave. The system also regulates when lights are switched on to maintain the illusion that you’re home, when it fact you’re enjoying a leisurely gondola ride down the Prinsengracht canal.

Welcome to the future. 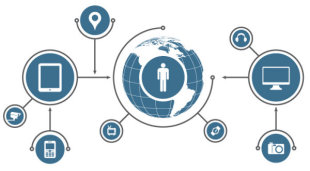 People search to find information. The next frontier in search, quite simply, is to empower people to act upon this information in a seamless way, wherever and whenever they are.

Know What I Mean?

Most internet users have become thoroughly used to the new and improved search made possible by Google Hummingbird. As impressive as the applications of semantic search and voice recognition technology are, most people won’t even notice developments in these fields – they’ll simply expect Google to keep improving and making their lives easier. If Google’s track record is any indication, this is exactly what we can expect.

This article was syndicated from Business 2 Community: How Google Hummingbird Changed the Future of Search