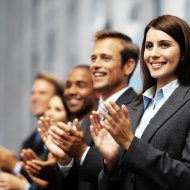 Young business executives clappingApparently there’s a reason why so many Silicon Valley start-up millionaires (and billionaires) continue to wear the same tattered jeans and flip flops they've always worn: It's not the money that makes them happy; it's the respect their hard work garners.

At least, that's one conclusion you might draw from a recent study conducted by Berkeley’s Haas School of Business. The study found that individuals rarely equate socioeconomic status with their subjective well-being (SWB). More than money, the study says, it's the "the respect and admiration one has in face-to-face groups (e.g., among friends or coworkers" that has a stronger effect on one's happiness.

The study was based on a survey Berkeley professor Cameron Anderson conducted with Haas School MBA students nine months after graduation. Cameron and his colleagues asked the MBAs questions about their overall happiness at work and found the responses didn’t correlate with the money they were making, but with the esteem in which their peers held them.

“Occupying a higher position in the local ladder thus created a sense of influence and control over one’s social environment, as well as a sense of belonging and acceptance,” Anderson wrote in the study.

A TechCrunch article echoed the study’s findings, arguing that the correllation between peer-respect and happiness is especially true for entrepreneurs in the tech industry. The article cites Facebook founder Mark Zuckerberg as an example. Zuckerberg’s earliest employees remember that he still slept on a bed on the floor even after his company passed a $1 billion valuation, preferring to work long hours and garner work-ethic adoration. Material wealth didn't matter as much to Zuckerberg as the quality and output of what he was creating with the Facebook team, wrote Facebook's first product manager Ezra Callahan on Quora.

The Berkeley study might also give some insight into why so many Silicon Valley start-up types don't stay in salaried positions very long before they're off to work on another start-up. Facebook CTO Bret Taylor, to name a recent example, plans to leave the company this summer to become an entrepreneur again. But there are scores of other examples of former employees from Google, eBay, PayPal, Twitter, etc., who traded well-paid jobs to work on their own companies.

“The joy that comes with an influx of money wanes quickly as people become accustomed to how wealth shapes their daily lives,” concludes the study. A good reputation–and not a big salary–may be where the real happiness link lies for entrepreneurs.

5 Things to Watch at Google Conference