Chocolate makes us swoon. It arouses our passions and tempts our senses. But
some people take this indulgence a step further, transforming their bittersweet
enthusiasm into a money-making adventure.

These three very different entrepreneurs reimagined their futures, turning
their chocolate-covered dreams into business realities. Here's a look at how
they traded their corporate suits for sweet shops. 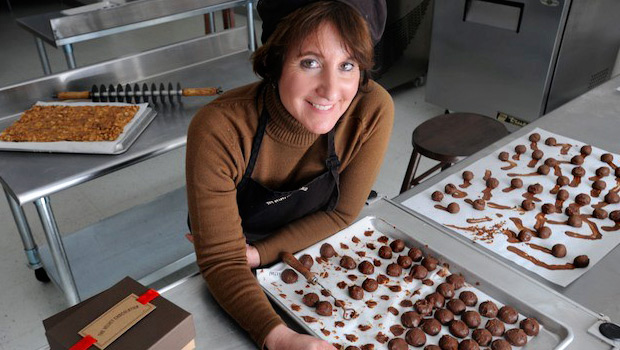 Then: CPA with a master's degree in taxation who spent more
than 20 years in a family GMC truck dealership, eventually becoming one of the
largest woman-owned dealerships on the East Coast. Sold the dealership after the
market soured in 2007.Now: Owner of The Velvet Chocolatier in
Stevenson, Md.How she got into chocolate: After selling her
dealership, Carliner decided to go to culinary school, thinking she might become
a dietician. "But I realized I hated hospitals, and I hated telling people what
to eat," she says. Around the same time, she took a two-day chocolate making
class taught by noted chocolatier Susan Notter, and that was
it.Her chocolate journey: In 2010, she
rented a commercial kitchen at a retirement community for $50 a month to begin
making her kosher chocolates. Last year, she opened her first stand-alone shop,
and an appearance at the Fancy Foods Show in New York City introduced her
chocolates to Oprah. Oprah selected Carliner's sea-salt-accented dark chocolate
caramel cups as one of her "favorite things of 2011."Her chocolate
education: Additional private lessons from Notter, and classes with
Jean-Pierre Wybauw and at the Culinary Institute of America.Biggest
challenge: Keeping perspective. "I had to keep reminding myself that
this is chocolate, not cars," Carliner says. "The investment was much more
reasonable, and thus the risk. Once I learned to relax, I could enjoy the
business in a way that I never enjoyed the automobile
business."Advice for would-be chocolatiers: Start small and
then build a demand before investing in a big commercial space or a lot of
expensive equipment. "You need to put your resources where they're best spent,"
Carliner says. "By starting small, you can build your confidence, and it keeps
your stress low. If you've put a lot of money in equipment or materials, then
your second career that you're trying to make work becomes nothing but stress,
and it doesn't work."What she loves: "It's a happy product,
and I love everything about it," Carliner says. "But I also like teaching my
four part-time employees about chocolate. They're so much fun to work with, and
they're great women."What's popular: Her caramel cups. "If
they're good enough for Oprah, they're good enough for everyone else," Carliner
says.What's next: Chocolate-dipped strawberries for
Valentine's Day and a peanut butter sandwich truffle. She's also working on a
new peppermint chocolate. "I want to do something like a peppermint patty, but I
have to do some more research," she says. 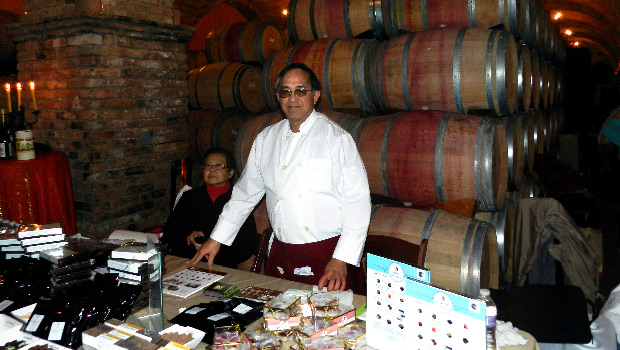 Then: Civil engineer with a master's in engineering who
spent nearly three decades designing hydroelectric plants in South
America.Now: Owner of Landru Chocolates.How he
got into chocolate: While building the third-largest hydroelectric
plant in the world in Venezuela, Baile discovered the gourmet chocolates made by
Carlos Colmenares. "I started to get interested in making chocolate, so my wife
says 'Why don't you learn this?' So I went back to him and asked him 'Could you
teach me the business of making chocolates?'" Baile says.His
chocolate journey: In 2003, Baile's last South American contract was
cancelled. He didn't want to move from California back to his company's
headquarters in Chicago, so he decided to turn his chocolate-making hobby into a
business. In 2004, he started Landru Chocolates with the help of his wife,
Delanie, and his son, Andrew. They tested each of their chocolates thoroughly,
gaining traction in the market before they opened up their shop in 2008. "Carlos
told me 'Don't build a store until you decide that you have your final recipe
and that recipe is tested so that it will sell,'" Baile says.In 2010 and
2011, Baile started entering his first chocolate competitions, winning several
first- and second-place awards for traditional chocolates, caramels and
toffees.His chocolate education: Additional lessons from
Colmenares, as well as chocolate and confectionery technology courses at
University of California-Davis and chocolate-making and showpiece courses taught
by Ewald Notter at the Notter School of
Pastry Arts in Florida.Biggest challenge: Marketing.
When Baile started his business, consultants gave him basic advice to network
and join the local chamber of commerce, but that didn't generate sales. So Baile
did what any engineer would do: he analyzed his situation and his product. "I
concluded that I needed to network with a more diverse group of people, and I
needed to cover more territories to improve sales," Baile says. Entering — and
winning — chocolate-making competitions helped increase his customer base and
secure corporate accounts. "We haven't 'made it' yet, but we're on the brink,"
he says. "The lesson I learned is that nobody is better positioned to market
your products than yourself.Advice for would-be
chocolatiers: Never give up. "I never quit," Baile says. "When I was an
engineer, out in the field, and a problem came up, I couldn't go back to the
office to ask for help. I had to be the solution. It's the same if you are an
entrepreneur. If you have a problem, you can't just quit."What he
loves: "Interestingly, it's not the chocolate. It's the process of
making it, and I am very passionate about the manufacturing," Baile says. "I
also enjoy networking and going to events where I introduce others to my
chocolate."What's popular: Truffles, caramels, toffee and
patÃ© de fruits. "We really make a great patÃ© de fruits," he
says.What's next: Concentrating on custom orders and
corporate accounts. "Last year was a good year, and this year, I think we will
be more successful," Baile says. "We already have a big client lined up, and
we're working with another promotional company." 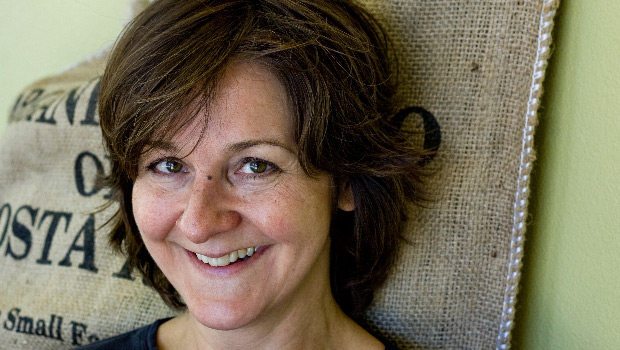 Then: Mapmaker for the State of Wisconsin Department of
Natural Resources for a decade.Now: Owner of Gail Ambrosius
Chocolates.How she got into chocolate: One of 10
children growing up on a dairy farm in Seymour, Wisc., Ambrosius learned that
the best way to get attention from her mother was to help her cook. "Chocolate
was always something I wanted to do, ever since I was a kid, but everyone
convinced me that 'Oh, you'll never make any money making chocolate. Why don't
you get a stable job at the state?'" Ambrosius says.Her chocolate
journey: State budget cuts led to Ambrosius being laid off in 2003.
"That was the kick in the pants I needed," she says. She spent the next year
taking business classes and developing a business plan, and started making
chocolates two days a week using a restaurant kitchen when the restaurant was
closed. She took 10 boxes of her chocolate to stores around Madison. "Nine
people said 'Yes, I'll try this,' so I had clients right out of the gate,"
Ambrosius says.In 2005, she rented the smallest space she could afford —
600 square feet — but she outgrew it in 2007 and moved into a shop four times
the size. Today, her chocolates are sold at gourmet shops and food cooperatives
throughout the Midwest.Her chocolate education: Classes at
Valrhona Chocolate in Paris.Biggest challenge: The whole
undertaking was a challenge. "Each day was a challenge, and it was much hard
work but I reminded myself each day that hard work pays off," Ambrosius says.
"We are the only ones who can make things happen, nothing is handed to you.
Working hard at the business each day and slowly seeing the rewards was
extremely satisfying. Putting my son through school, seeing him flourish was the
reward. Perseverance and trust in yourself and others is key."Her
advice to would-be chocolatiers: Make sure you have the stamina for the
physical labor involved in making chocolates. The summer before Ambrosius
started making chocolates, she took a job at a bakery. "I had worked in a lot of
restaurants before college, but it had been over 20 years since I had been in
the food industry," Ambrosius says. "I wanted to make sure I still had it in me
and that I still enjoyed that fast pace. And boy, do I love it."What
she loves: Visiting the farmers who grow her cacao in Central and South
America. "I've made some really good friends in Costa Rica, and a few years ago,
I taught the wives of the farmers a workshop on how to make chocolate,"
Ambrosius says. "They've recently emailed me, and they want me to come back.
That makes me proud and happy."What's popular: Her
once-a-month chocolate-tasting classes. And for Valentine's Day, she's doing a
cherry bounce chocolate, made with hand-harvested cherries from a friend. "It's
like a cherry cordial you get at the drugstore, only so much better," Ambrosius
says.What's next: Growing her business and expanding her
distribution outside of the Midwest with her son, Isaac May. "I was a single
parent, and my son was a teenager when I started," Ambrosius says. "One of my
goals was that I wanted to make enough money to put my son through college. I'm
proud to say he just graduated in December, and he came to me and said 'I would
love to work with you and make this a family business.' I can't tell you how
happy I am."

Jeanette Hurt writes extensively
about cooking and food and is the co-author of The Complete Idiot's Guide to Wine and Food Pairing and author
of The Cheeses of California: A Culinary Travel Guide, among
other books. She lives in Milwaukee.