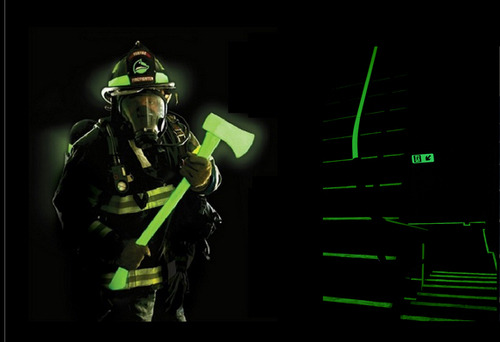 “When you grab a tiger by the tail you better have a plan to deal with the teeth,” says entrepreneur Zach Green.

That’s what he has learned after four years in business for himself. When Yahoo Small Business profiled Green’s startup MN8 in 2013, it was already generating $1 million a year in revenue selling his proprietary “Foxfire” brand of photoluminescent-coated safety and egress products, including firefighters’ accessories, that help light the way to exits, equipment, and fellow firefighters.

The blackout at the 2013 Super Bowl in New Orleans, where the lack of any luminescent egress technology left the Superdome crowd in darkness, was a major boon for business. “I could have bought $10 million worth of advertising and it would not have been as effective as that blackout,” Green says.

He hired three temporary workers the day after the game, and made more sales in the following week than he had made in the previous 6 months. “That really accelerated our safety and egress strategy. It launched our trajectory toward another level I could never have dreamed of,” he says.

But Green says he knew he wasn’t equipped to get there on his own. “Going into burning buildings was not an easy job, but [running a business] is overwhelming. The amount of decisions that need to be made, handling growth and employees and investors and all of those things—I was really struggling a couple months ago when it was just me.“

Recalling the advice of business mentor and former IAMS chairman Clay Mathile to “surround yourself with people who are better than you,” Green hired a president and COO as well as a CFO. The COO, he says, “has tremendous experience handling the day-to-day, and I can focus on what I do best, which is building the brand and external stuff.” As for the CFO, Green says he “is making sense of the numbers so that we can make good strategic decisions.”

Working in the pharma industry, Green says, “The procedures and bureaucracy frustrated me. But now I know why they had that. Now that I don’t have a boss I want one, and I want bureaucracy and procedures.” (Don’t get him wrong though, he also wants startup-style fun. His 8,000 square foot warehouse features a firepole, a disco ball, and a foosball table.)

With a senior team in place, early profits pumped back into product development, and $1 million in venture capital, Green says the company is now poised for growth. MN8 is sourcing higher grade elements for its glow-in-the-dark pigment, has partnered with academic scientists to investigate new molecular structures for luminescence, and has trademarked a procedure it calls Advanced Photoluminescence Technology. “We’re getting products glowing for 80 hours,” Green says. “It’s so bright it’s like a flashlight—it lights up whole room.”

Green says his ultimate goal is “to light up the world” with his environmentally sound products (they require no power source and emit no pollution).

But he has already achieved what he calls his “crowning accomplishment.” In a recent television feature about New York’s new Freedom Tower, glow-in-the-dark Foxfire technology could be seen on the helmets of FDNY’s Rescue 1 Company—the elite team whose work in the 1993 World Trade Centers bombing and on September 11, 2001, inspired Green’s business. “Talk about bringing this whole experience full circle,” he says.