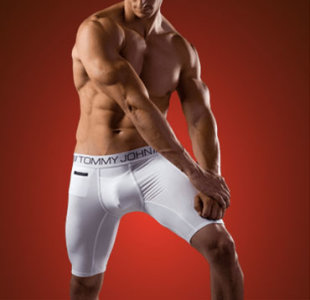 Tommy John underwear have a loyal, and growing, following

Tom Patterson, a former small-town South Dakota high school football star, is building an underwear empire in NYC’s fashion district. It all started with being really annoyed by his undershirts.

Working as a medical device salesman after graduating from Arizona State University, Patterson wore a suit and tie every day. “My undershirts constantly came untucked, they stretched out, and they got yellow,” he says. It bewildered him that no one had ever created a t-shirt that would stay tucked in.

His informal market research uncovered a “sea of sameness” in the men’s underwear industry. The only difference between brands, he says, was the fabric blend and the name on the package. He realized that with an innovative design and smart fabric that would maintain its fit, he could create a standout brand.

Layoffs by his employer in 2008 created an opportunity: Patterson took a field trip to the Los Angeles garment district, where he bought samples of a stretchy, soft, nearly sheer fabric. Based on a t-shirt whose fit he liked, he sketched a pattern that was a bit longer and more tapered, and he paid the tailor at his local dry cleaner to sew a prototype.

“That worked, so I paid for 15 more and sent them to my friends just to make sure I wasn’t the only guy out there who felt weird about my undershirts,” Patterson says. Their feedback prompted him to have 200 shirts made at an L.A. factory, and to use the profits from sales of those to order 500 more. 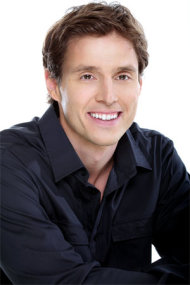 At first, he operated his men's apparel startup, Tommy John, from his San Diego apartment. “I was taking my Bernese Mountain Dog’s hairs off the products before shipping online orders,” he says. Not wanting to be a "coulda shoulda woulda kind of guy,” he soon cashed out his 401k, hit up friends for loans, and maxed out his American Express and Visa cards. Five months later Neiman Marcus placed an order, and then Nordstrom did too. He moved the company to New York City to be closer to buyers, and moved manufacturing overseas to achieve economies of scale.

Five years later, Tommy John products include shirts, briefs, and socks that rely on a patented, no-shrink, stretch fabric with a “specific mathematical ratio to make sure it stays in place in 360 degrees,” Patterson says. The company has a utility patent pending for the use of the fabric in undergarments. “We ensure the same function in every product as far as staying in place and moving with your body: your shirts never come untucked, your underwear never rides up your legs, your waistbands never roll over, your socks never fall down,” he adds.

Clearly, Patterson wasn’t the only guy frustrated by poor-fitting underclothes. Tommy John customers range from 18 to 80 years old and come in all shapes and sizes, up to 7 feet tall and 350 pounds, he says. In fact, the brand has started a national conversation about the fit of men’s skivvies.

Howard Stern instigated a traffic jam at the Tommy John website and an inventory shortage when he told his listeners that the $30 underwear that doesn’t smash his anatomy has changed his life. (The company’s savvy marketers quickly created a social media contest to give free underwear to customers who tweeted #HowardSternTookMyTJs to @TommyJohn). And New York Times financial columnist Andrew Sorkin wrote an ode to the $40 Tommy John undershirts that don’t “ride up your torso throughout the day, adding even more heft to your waistline, creating a bunched-up affair” the way other brands do.

Says Patterson, “Guys are dropping their pants at dinner in restaurants saying, ‘My underwear is amazing.’ It’s so comfortable it makes them comfortable about talking about it. We’ve created a product every guy needs, but don’t know they need it till they wear it.”

Patterson says he had aspired to be an entrepreneur ever since mowing lawns and blowing snow as a teenager. “I always worked and thought, ‘If an idea comes, I’ll start my own business.’” And, he says, business ownership is as satisfying as he had imagined. “In medical sales, when I would win awards or reach goals, the high was not as high as I hoped it would be. But now, being responsible for others’ livelihoods and seeing how much work goes into this, it’s really rewarding.”

The financial rewards aren’t bad either. Patterson says the business, which employs 22 people, brings in “under $20 million in revenues now,” and has grown 300 percent year-over-year. He predicts Tommy John will have revenues “well over $20 million” in 2015. But even that could be an underestimate: “In June we sold through 5 months of inventory in 30 days,” he says.