We’ve already learned that each of the top social media platforms must be used differently, but do you know which is the fastest growing? How about which one drives the highest revenue? Or are you curious about the timeline of content virality? Stumped? Well, let’s just say there are some serious perks to being on Pinterest.

Since it’s inception in 2010, Pinterest has been the fastest growing social media platform in the US. In 2012 Pinterest saw an incredible 1047% YOY increase in unique visitors, while Facebook actually saw a 4% decrease according to the Nielsen Social Media Report. Not only that, but brands are now flocking to Pinterest. Of the top 1,500 Global Brands:

If you were a betting person, which social media platform would you say drove the most revenue? You might be surprised to learn that in spite of both Facebook and Twitter being older and having more users, Pinterest is actually the highest revenue driver. 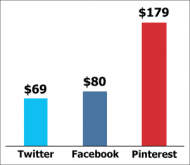 Virality of pins on Pinterest has very little to do with silly gimmicks to get more “likes”; it’s all about the quality of the content. The life cycle of a pin is endless, while the life cycle of a Facebook post averages to 80 minutes, and Twitter posts are all but forgotten in 5-25 minutes. It’s not unusual to see a flurry of activity on a pin that’s well over a week old. In fact, the most repinned pin on Pinterest was originally pinned over a year ago! To learn more about what makes great content, read our blog post about creating the perfect profile!

Let us know how you use Pinterest perks in your marketing mix in the comments!