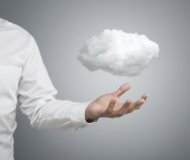 Why the Manufacturing Industry is Shifting to SaaS Cloud HostingAs noted in a recent Forbes post, the top manufacturers of 2013 all have something in common — they’re all looking for ways improve efficiencies and ease of use from a supply chain, distribution and services standpoint. Increasingly, this is achieved through cloud-based manufacturing applications such as Software as a Service (SaaS). Though it is just one type of cloud computing, SaaS is fast becoming the most popular solution in the manufacturing industry. With SaaS, businesses do not actually manage the cloud infrastructure and platform running their software applications; instead, this task is handled by the cloud hosting provider. Although many companies are more willing to place their systems in a SaaS environment than a cloud that they do not own or control, there has been much confusion surrounding a number of details regarding SaaS cloud hosting.

For example, Mint Jutras recently surveyed companies who had adopted SaaS cloud hosting in manufacturing, distribution, and other industries and found that 49% of those in manufacturing do not understand the difference between single and multi-tenant SaaS architectures. This number increased to 66% across all industries.

The confusion between single and multi-tenant has been amplified by many assertions that multi-tenant is the true SaaS environment. This is usually due to a lack of knowledge of the difference between the two combined with a preference leaning toward multi-tenant environments.

SaaS by the Numbers

In 2012, a total of 22% of all manufacturing and distribution software was SaaS-based. This number is expected to grow to 45% within the next 10 years given what companies say they would be willing to consider. In contrast, traditional on-premise deployments are far less utilized than they were in the past; a few years ago the percentage of use was in the 90s, while today it stands at just 50%.

Contrary to what would probably be expected, SaaS is not yet utilized by most small companies and startups. In fact, the opposite is true, and the willingness to use SaaS cloud hosting increases with the size of the business. Large corporations are most likely to consider SaaS and also show the least interest in traditional deployments. The lag in SaaS adoption on the part of SMBs represents a big opportunity for SaaS cloud hosting providers.

In addition, the Mint Jutras study showed that companies with the most successful Enterprise Resource Planning (ERP) implementations have the highest interest in SaaS. In this case, ERP implementation was based on achieving company-specific performance metrics such as percentages complete, on-time delivery, and customer retention. Those companies in the top 15 percentile were 35% more likely to consider SaaS, and top performers in the manufacturing industry were twice as likely as their competitors to do so.

Why the Trend Toward SaaS Cloud Hosting?

Not surprisingly, cost was the biggest factor driving the shift to SaaS cloud hosting. A total of 52% surveyed named lower total cost of ownership as their top reason for preferring SaaS, while a further 46% cited lower startup costs. Of all respondents, 42% mentioned lower IT overhead or lack of the need for IT staff as an advantage. This makes sense, given many companies, especially smaller businesses, do not have internal staff who are experienced enough to manage complex hardware, infrastructure, and software environments.

While nearly 20% surveyed did not think SaaS to be more cost effective than traditional on-premise deployments, the claim was based around the presumed cost savings of buying upfront over renting for the long term. This, however, does not take into consideration the cost of future software upgrades, hardware and middleware to support applications, and IT staff for maintenance, and the ongoing cost of future upgrades.

In fact, the second most popular reason cited for SaaS as a preferred choice was the reduced cost and effort of upgrades, mentioned by 48% of respondents. In addition, 39% noted the availability of cutting-edge technology through more frequent updates. Although some upgrades may be offered by providers of traditional on-premise deployment options, the time consuming nature of the process is not alleviated as it is with SaaS. A further 26% view the above factor negatively due to a fear of losing control, especially in a multi-tenant environment; however, this problem can be avoided when clients are given the chance to opt out of upgrades.

A final reason for the lean toward SaaS was the need for heavy customization, with 25% of respondents citing this factor. While highly customized solutions are often more of a burden to clients who have limited time and risk missing out on the latest releases that could benefit them, Mint Jutras noted that the need for customization is more important for perceptional, rather than practical, reasons.

In the end, we’re still in the early days of cloud hosting. Given the cost savings, operational efficiency, and customizability of many SaaS cloud hosting solutions, I expect most businesses-large and small-will eventually migrate to the cloud.

What trends are you noticing with respect to IT in the manufacturing industry, cloud or otherwise? Feel free to share your comments below!

Why the Manufacturing Industry is Shifting to SaaS Cloud Hosting