Why Do We Post the Things We Do to the Online World?Back in 2010, I think, I decided that I was done with Facebook. OK, this wasn’t the first time I had come to that conclusion and it would not be the last. In this particular case, I decided I would go back to where my online experience had started, which was the blogging platform called Livejournal. There was a lot I was not liking about Facebook. I did not like how easy it was for me (and others) to post banal, meaningless details about our lives. Livejournal gave me an opportunity to noodle a thought, write it out, and then get more than a “thumbs up” when I was done, if anyone was in the mood to react at all. On Livejournal I was connected to people I had known in my college years, primarily. Facebook was full of people i had met online, and I was becoming confused about our relationships. Were we friends? Facebook said so. I didn’t feel like dealing with the moral dilemma, I guess.

Of course, I returned to Facebook after some short amount of time, and I have never really returned to my old friend Livejournal. My Facebook world is a hybrid of communities that represent a “This is your life” amalgam for me now. There are people on Facebook with whom I went to nursery school. There are high school friends, college, friends, grad school friends, work friends, and people I have met over my years “doing” social media for my family’s full-service marketing firm. Indeed, if you traced my connections chronologically you’d have a good start on the story of my life. But this does not explain the urge I experience to report on random things throughout the day. “It’s snowing.” “It’s warm.” “It’s cold.” Of course my statements are not so simplistic, but in the grand scheme of things, that is about the level of significance many of my Facebook updates carry with them. 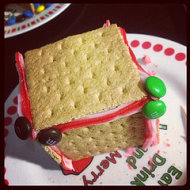 Why Do We Post the Things We Do to the Online World?This is not a self-condemnation. I am of course not the only one who posts things to Facebook that reflect the everyday grind of life. People post pictures of what they are eating. I’ve seen people post pictures of an empty plate, noting that what had once resided on that plate was really tasty. They ate it all. Do I need to know these things? I don’t know what my parents eat for dinner most of the time, nor do I really care. Same for the rest of my family, unless they are eating something I’m really jealous of. Yet every day I comment on pictures of peoples’ food, pictures of peoples’ new shoes, peoples’ observations about airports and grocery stores. Why do we post these things?

I pose this question rhetorically. I don’t have an answer. For me I would say it has become a habit over the years. You might even sy it has become an addiction. Through these tiny humdrum updates I have built real friendships, so each little one can’t be a waste of time. Sometimes posting something seemingly unimportant touches another person in an unexpected way and you learn something about them they may not even have thought about. I like the unpredictability of those kinds of interactions.

I think there is more to the story though. I am often puzzled as to why people post pictures of their food to Facebook while they are out with their spouse to celebrate an anniversary. Why do people post pictures of themselves snuggling with their children? Shouldn’t the focus be exclusively on the spouse, exclusively on the child? Why do people who say they are content with their lives spend hours every day staring at a computer or phone screen, typing to people who are not there. Typing to people who may even be on the other side of the world?

I am reading an amazing book by Sherry Turkle called Alone Together. Right now she is exploring how humans interact with robots that are intended to mimic facets of human nature. Turkle notes again and again that when humans engage with Artificial Intelligence, the human mind changes in a very short period of time. The robot evolves from “a machine” to something the human wants to earn affection from. The robot is anthropormorphised. It is given a name, it is attributed feelings like caring, likes, and dislikes. The human has something missing, and suddenly there is something that can fill that hole, whatever it may be. A child who feels it does not get enough attention can suddenly receive undivided attention from these robots. A person who feels unimportant can become proud if they teach a robot a new word or action.

Is this why we interact online the way we do? Perhaps I post that I like thunderstorms because I want to share that joy with other people. Perhaps people share pictures of them with their children because they feel a need to prove that they spend enough time with their children. Perhaps people post pictures of new purchases or great meals because they want to prove that their lives are really good. Who are they proving that to, however? To others? Or are we all looking for a pat on the back from people, some nod of encouragement saying that even with the craziness in this world, we’re doing ok?

There’s been a lot of talk lately about how coaches, teachers, and parents are raising kids with an “everybody’s a winner” mentality. I remember when this surfaced during my childhood. My brother participated in a competitive event called Odyssey of the Mind. He and the other kids on his team worked for weeks, really hard, on what they were going to do. All of the other competitors worked really hard too. At the end of the day, it was announced that there were no winners because everyone who had participated was a winner. I seem to remember a distinct groan from everyone who was there. Or consider the quote from the Pixar movie The Incredibles. “If everyone is special, no one is.” If we’re all winners and all special, we are like everybody else. There is nothing remarkable about us. Maybe we need our online interactions to accentuate what makes us unique.

Why do we post the things we do? It is a hard thing to think about. It’s like that childhood moment when suddenly you realize you’re too old to play “house.” The dolls aren’t real, you’re not really a mom or dad, and anyway, real life may not be so great as to want to play it out more than you have to. Pulling back the curtain of why we post the things we do can make us ponder things about ourselves we don’t really want to think about. Flaws. Bad feelings. Things we know we need to work on but don’t really want to. Are you willing to take the journey?