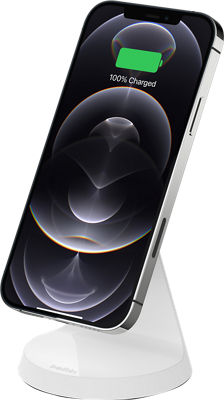 Keep your MagSafe device fully charged with the BOOSTUP CHARGE Magnetic Wireless Charger Stand 7.5W - Black. The magnetic attachment snaps seamlessly for easy, one-handed placement. The secure fit keeps your phone from jostling or vibrating off the charger. The stand holds your phone steady in portrait or landscape, making texting or streaming video while charging a breeze. Non-slip design keeps your charger secure on any surface. And, the built-in LED light indicates if there's a foreign object interfering with charging.
All features & specs
CA residents: see the
California Proposition 65 WARNING
Reviews
☆☆☆☆☆
★★★★★

[This review was collected as part of a promotion.] This magnetic charger does its job and does it well. I like the simple design. The magnetic hold is strong enough to hold the phone, but isn't so strong that you can't remove the phone without leaving the stand on the desk. At first, I had trouble finding the magnetic sweet spot on the first try. After a few days building muscle memory, I am now able to line it up right on the first try. The stand hold the phone at an angle perfect for Face ID. I am able to unlock the phone from a natural position. This is a solid magnetic lock that is great for a desk or workspace.

[This review was collected as part of a promotion.] The charger is small and charges super fast, but I wish it would charge with my case on. The magnet isn’t as strong as other chargers so you have to remove the case from the phone. Also, I wish it came with a separate usb c port adaptor instead of a solid connector.

Title says it, best phone mount I’ve had so far. Only want is wish there was a way to adjust the viewing/resting angle of the phone. Other than that the ease of use, versatility and ease to change position vertical/horizontal and to get a charge on top of it. I basically couldn’t ask for more. If they can figure out a way to get that swiveling capability the only way to improve from there is charge rate. Definitely recommend, got a second one for my house after it’s gone so we’ll in my office.

Simple, Great, Does The Job Well

[This review was collected as part of a promotion.] A really great MagSafe device, with solid performance. I’ve been using this at my work station in the office, and it’s so easy to effortlessly ‘attach’ my iPhone 12 Pro Max to both charge and have a good viewing angle. The aesthetic works for a uncluttered, modern feel. It has not slipped or fallen once, even when turning the device to landscape. The charger feels sturdy, as well as the cord included. Don’t forget that you’ll need a charging brick, unless you order it together! No complaints here!

Another solid product from Belkin

[This review was collected as part of a promotion.] As usual Belkin delivers a solid product at a reasonable price. Using Apple's MagSafe feature as means to hold the phone and ultimately create a stand is pretty genius. And now that I've used a stand (as a charger) I don't think I could ever go back to a basic flat Qi charger. The magnet holds well - possibly a little too well. It can sometimes take 2 hands to remove the phone from the stand. Partly because of strong magnets and partly because the stand, while weighted, is plastic and a bit light. My only real fault with the product would be the 7.5W charging. Since MagSafe is used here, which has the ability to charge at 20W, I would have expected faster charging. It would seem the charging is capped at 7.5W as a means of reducing overall cost though. Which is fair considering this products MSRP is actually cheaper than Apple's offerings. There's little to dislike about this product overall though. It looks good, performs, well, and I love the fact that it's a stand.