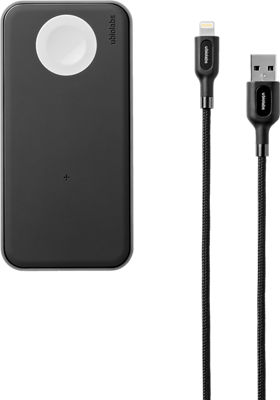 Keep your devices fully charged while on the go with the Ubio Labs Portable Wireless Charger - 4,000 mAh. Designed with soft-touch and plated finishes, this sleek charger lets you refuel anywhere. LED indicators help you track how much battery you have left. The wireless charging pad works on Qi-compatible smartphones with cases up to 3 mm thick and is 7.5 W fast charge compatible with iPhone 8 devices and newer.

Multi-use for multiple devices.
Keep all of your devices fully charged. In addition to the wireless charging pad and Lightning port, the Portable Wireless Charger features a magnetic charging module for the Apple Watch and is compatible with wireless charging cases for AirPods.

A battery pack that packs a punch.
The powerful 4,000 mAh battery can power your devices through multiple charges. Charge your Apple Watch up to 17 times, your AirPods up to 10 times or your Qi-enabled smartphone up to 1.5 times before plugging in your power pack for a fill-up.*

Multi-purpose charging.
The included 1.8A Lightning cable charges your power pack, but it can also double as a phone charger. Combined with the wireless charging pad, it lets you charge multiple devices simultaneously.

*Battery life and charge cycles vary with use, settings, and other factors; actual results will vary.
All features & specs
CA residents: see the
California Proposition 65 WARNING
Reviews
start rating review 2.8 out of 5 stars
☆☆☆☆☆
★★★★★

Good but doesn't always start charging as I would expect.

I like that it can charge both my Apple Watch and iPhone at the same time. The only issue I have with it is that at times after placing my watch and iPhone on the charger, it doesn't always start charging. Reading the documentation, it noted the unit goes to sleep and that to wake-it-up you are supposed to shake it. I took off the watch and phone shook it and put them back on but found it still wasn't charging, Also tried to unplug the unit and re-plug it in but still didn't seem to wake it up. Left the watch and phone there and several minutes later it suddenly started charging. Not sure what the issue is! Will continue to use it to see if it gets worse or better.

Disappointing in so many ways

On June 11, 2021 I upgraded my iPhone 8 to an iPhone 12 Pro with Verizon. While at our local Verizon store to pick up my new phone, I also purchased a ubiolabs PBB182 Wireless Power Bank in an attempt to reduce some of the wire clutter on my nightstand as well as to simplify the charging of both my iPhone and Apple Watch. While the Power Bank helped with the clutter, I am experiencing a few issues with the product. 1) At times when I have placed the iPhone and watch on the charger, the iPhone and Watch at times initially reflect that charging has started, however, when I wake up in the morning I find that charging didn’t continue into the night as it should have and the watch battery especially didn’t have enough of a charge remaining for the next day. 2) Also have experienced times when the Power Bank could not be woken up. I attempted to shake the Power Bank as directed in the instructions that came with it. After repeated attempts made to shake it awake failed, the last resort was to unplug it, wait 15 to 20 seconds, then plug it back in. Sometimes that effort would also fail to wake it up. When it couldn’t be woke up I found myself needing to use the original charging cables in order to charge my devices. 3) Sometimes after placing the iPhone and Apple Watch on the charger and making several unsuccessful attempts to wake up the Power Bank, I would leave both devices on the Power Bank. After several minutes I would hear the iPhone ping indicating that charging had started. With these issues happening so inconsistently, they make the product unreliable at best.

Does not charge iPhone 12

I’m on my 2nd one. I returned the 1st charger after a week cause it stopped charging my phone. I exchanged it for a new it worked great for a week now I’m running into the same problem, phone is not charging but my watch is.

Stopped working to charge iPhone after a week

The watch is still charging but the iPhone will not charge on this device. It’s a brand new iPhone 12 so I doubt it’s an issue on their end