Meet King, Jhony, Rokia, members of a sixth-grade team from the Bronx that was one of 10 national winners last year in the Verizon Innovative App Challenge.

“These were probably some of the quietest kids in the school,” their principal, Catherine Jackvony, said.

But now, said adviser Tammy Trudell, “suddenly they had a reason to step up to the plate, share their ideas and be assertive. They had a confidence that wasn’t there before.”

The Bronx Academy of Promise is a once-failing charter school that started in a hand-me-down building in the shadow of the 4 Line elevated tracks in the lowest socioeconomic congressional district in the United States.

Starting in 2012, a half-dozen sixth-graders teamed up to build an app to develop math skills for students in grades 4 to 8. They gave it a Greek-mythology theme and designed it as a game; right answers scored points, repeated wrong answers led to a tutorial. They named it Quest Math.

They worked on Quest Math after school. Trudell, a teacher, supervised. An adviser from Massachusetts Institute of Technology helped with the programming. Two kids worked as designers, two as developers, two as testers — the same groupings you’d find on a Silicon Valley team. One teammate did double duty as project manager, to keep the work on schedule.

"They were able to think that anything is possible and the sky’s the limit. Also, they can now think, ‘What I do is important. I have a voice. I don’t have to scream it, but I have something to say.’”

The students had to decide for themselves what the app should include, how to troubleshoot problems. Trudell spurred them to think on their own.

The deadline pressing, they worked during lunch periods and took the teachers’ “early” bus to grab more time at school.

And they won. Each sixth-grader received a tablet, and the school got $10,000.

But it’s the intangibles that might have the most lasting impact.

King is now a self-assured seventh-grader, mature beyond his years, his brown eyes casting a serious gaze as he opens a laptop and explains the intricacy of his team’s app.

Before the App Challenge, neither he nor his teammates knew what Google was. Now they’re contemplating careers steeped in technology and science, areas in which America is sorely in need of nurturing young talent. Jhony said he might become a computer technician. King is thinking about programming. Rokia’s choice is surgeon, but her mother wants her to be a computer technician.

Their success has had a ripple effect touching their classmates, students in lower grades, their families. King’s younger brother, in pre-K, has asked to use King’s tablet to practice writing and Jhony helps his little sister do math on the tablet, the younger siblings using the technology years earlier than their elders did.

At a board meeting held to recognize the winning students, a father said, “I never imagined anything like this. Now I know that this school is as good as New York City schools that have money.”

Now, fifth-graders can’t wait for sixth grade and the chance to work on an app themselves. And the winning team is eager to help. They’ve decided to “pay it forward” by making the app available for free on the Google Play store, so students of little means will have access to it. King said he didn’t want any student denied the benefits of the app because a parent hesitated to buy it.

“When you see yourself as needing something, and you turn that around and are in a position to give something to someone else, the feeling that comes along with that change in role is worth millions,” Mr. Trudell said. “This opportunity gave the students the confidence to see a future for themselves because they made that transition.”

The Bronx kids’ horizons expanded with each new step. When working on their app, they learned about graphic design and programming, including the workings of a program’s front and back ends: the display and the coding. They dealt in “if-then” statements and became adept at troubleshooting errors and bugs.

After winning, the six students presented the app at the National Association of Elementary School Principals conference in Orlando. There, they saw high school students working on robotics, a field previously unknown to them, which enlarged their understanding of engineering.

Rokia, the main presenter in Orlando, is far more articulate as a result of the experience, the principal said. The shy Jhony is speaking aloud as never before.

Standing up and explaining their app in a professional manner, “like the high school students did who also were present, gave them hope that someday they could be one of those students applying to college,” Jackvony said.

“They were able to think that anything is possible and the sky’s the limit. Also, they can now think, ‘What I do is important. I have a voice. I don’t have to scream it, but I have something to say.’”

Technology Designed For the People Who Inspire Us Most
08/08/2014
At the New England Homes for the Deaf in Danvers, Massachusetts, videophones are communications lifelines for residents and staff. 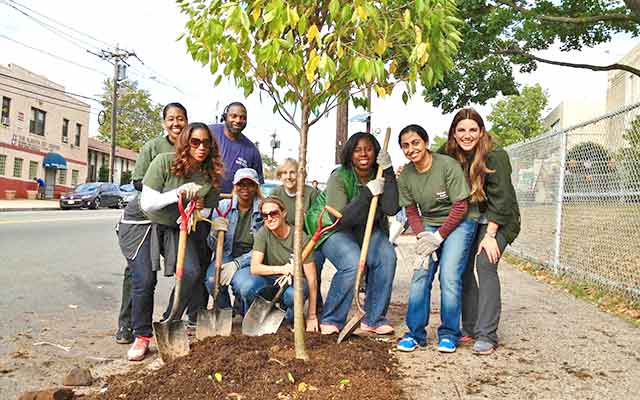 Green Team Brings Focus to Sustainability
08/08/2014
In 2009, our employees spoke up and expressed their interest in doing more to foster sustainability within their own company and around the world.
Services & Solutions
Support
Network Technologies
Innovation
Follow Verizon News
Follow Inside Verizon
Follow Verizon Careers
Follow Customer Support
Follow VerizonGreen
© 2023 Verizon