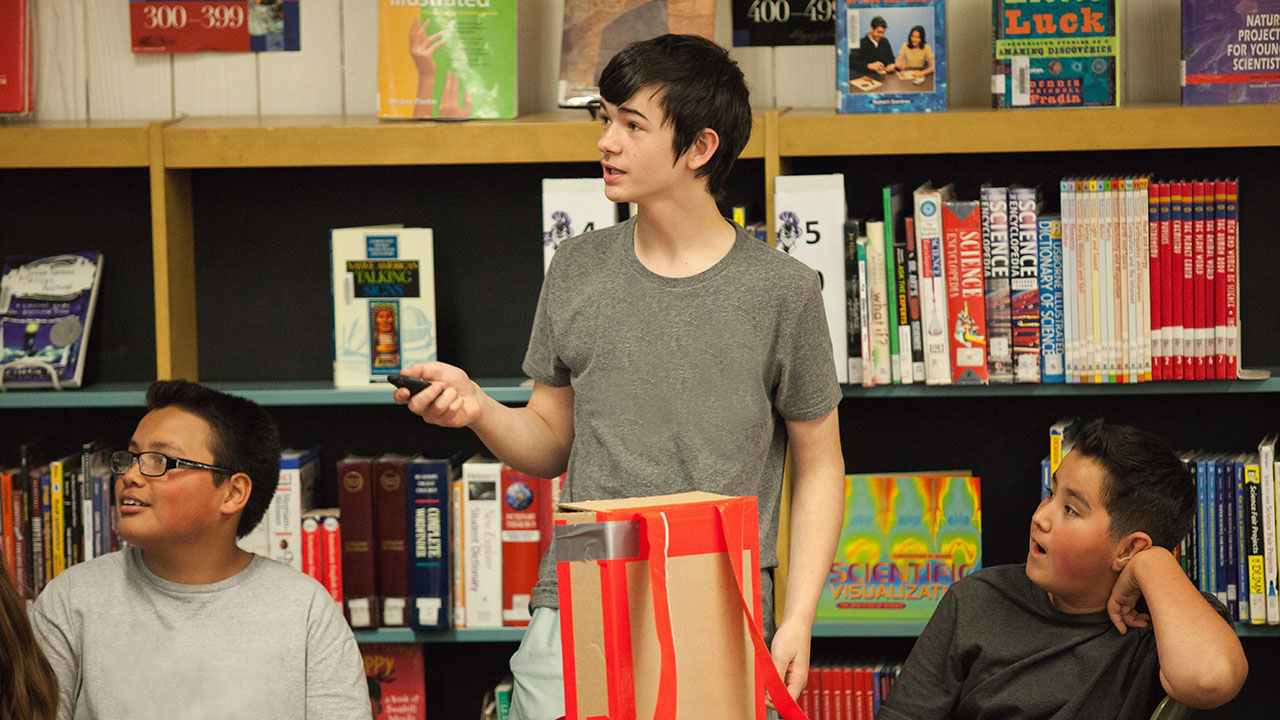 In January, Marshall Woody, a teacher at Mann Middle School in Colorado Springs, presented a challenge to his students: Could they engineer a solar backpack?

Knowing that some of the best ideas come from practical, everyday needs, he suggested they focus on solving an issue for their teacher, Leslie Rich — a Verizon Innovative Learning school storyteller and coach who helps integrate Verizon-provided access and tablets into the school’s culture and curriculum. This challenge would also give the students a rare, real-world application on which to build their knowledge of science and technology.

These are the steps the students took to make the backpack — and how they nailed the winning design. 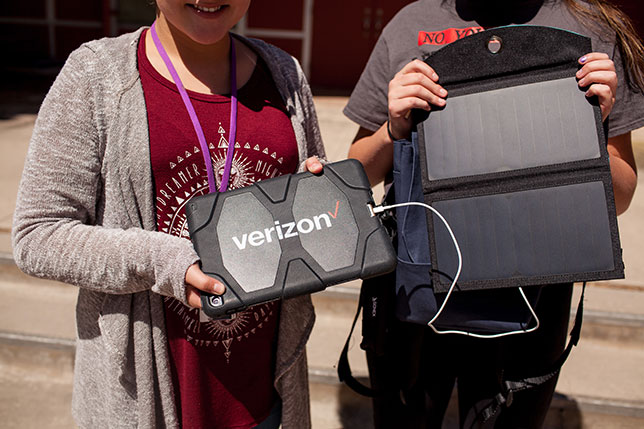 The students were challenged to design backpacks that could charge phones and tablets on the go by harnessing solar energy.

Leslie Rich is an avid cyclist who likes to track her progress using an app, Woody explained. There was just one problem: the app drained her cellphone battery. But if she had a backpack with solar panels, she could keep her iPhone fully charged while riding, enabling her to map her miles and ensuring her daughter could reach her if needed.

Seventh-grader Zoe Smith initially felt daunted by the challenge. “It seemed like a lot of parts to have to put together.” But Smith, who aspires to become a doctor or engineer, was eager to give it a shot.

An experience like this is critical for students like Smith and classmate Oliver Martinez who have a budding interest in STEM subjects and for whom “access to technology is not something they would necessarily be exposed to at home,” says Rich. 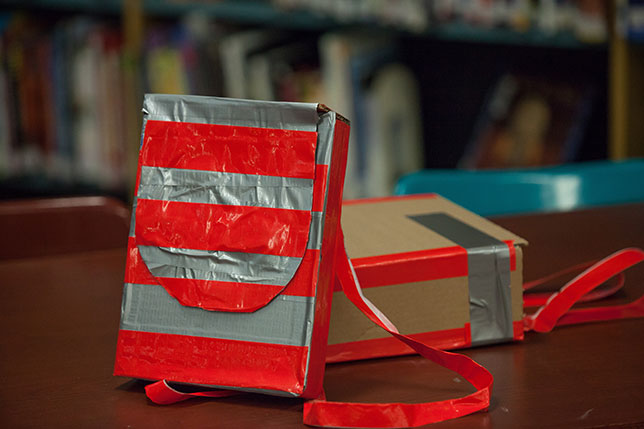 1. Research and development: What makes a good backpack?

The class split into two teams of six students that competed against each other to design the backpack. Rich was slated to choose the winner at a big “reveal” in May.

The students started by interviewing their teacher, peppering her with questions about size preference, whether one USB port would suffice, and how she planned to use the backpack. “They treated me like a real client,” says Rich, who has been teaching at Mann for six years. She made a point not to offer up information unless asked. “They got pretty specific. They asked my favorite color, which is blue. They brought up things I hadn’t even thought of, like latches. I was impressed.” 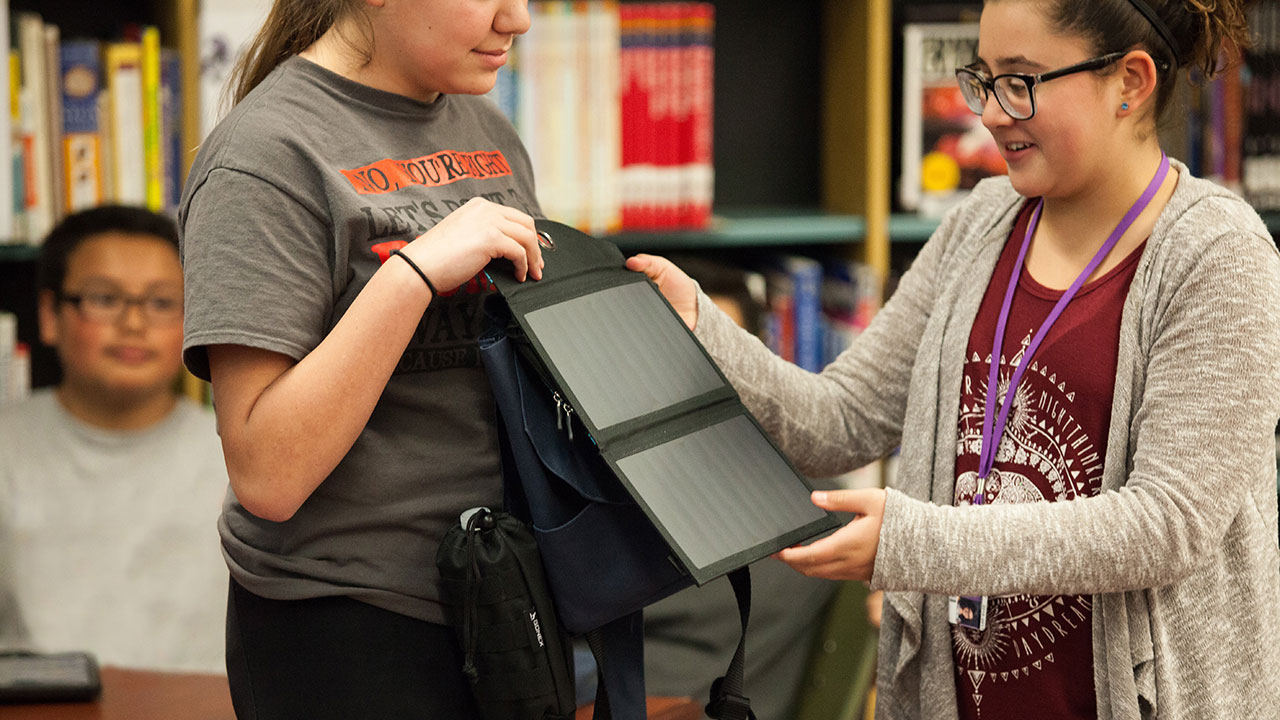 With the help of local engineers, the students learned how to measure the strength of different solar panels.

Step two was coming up with a design and making a prototype from cardboard and duct tape. Though Martinez enjoyed doing the computer research, he found building the prototype to be the most fun part. “It was really cool putting the design into real form,” he says.

Woody guided them through the process and helped them figure out what they needed to know to begin, like how to choose a battery pack. The students also got an assist from local engineers who came in every week to offer their expertise and help students understand the mechanics of a solar backpack, such as using a voltmeter to measure the electrical strength of different panels, which the students tested both inside and outside.

When it came time to turn the prototype into an actual bag, Smith tapped into her sewing skills. “I really liked tracing the pattern for the backpack,” she says. Both teams sent their sewing patterns to the school’s secretary, who is a seamstress, to construct the backpacks using denim duck cloth. 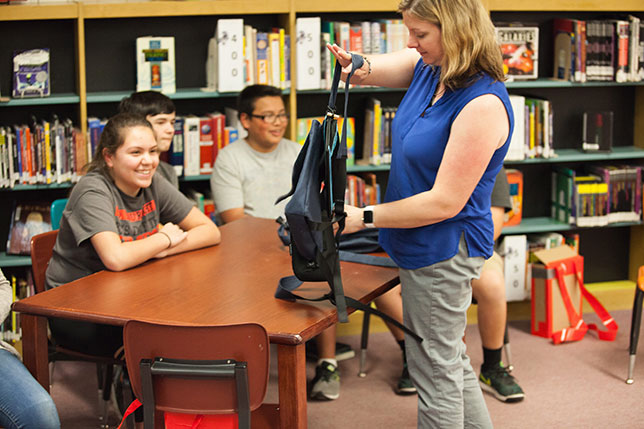 Teacher Leslie Rich tested out each of the student-created backpacks to judge the winning design.

4. Testing: Trying it on for size

When Rich tried on each team’s prototype, the teams had very different responses. The all-male team asked Rich what she thought, and when she replied, “It’s pretty cool,” they said, “Great! We’re done.” In contrast, the team comprised mostly of girls asked her follow-up questions, such as, “What do you think of this pocket?” and “What do you think about adjustable straps?”

“It was interesting to see how gender played a role,” Rich says. “With the girls, it was very much like shopping with a friend, whereas the boys were more focused on functionality.” 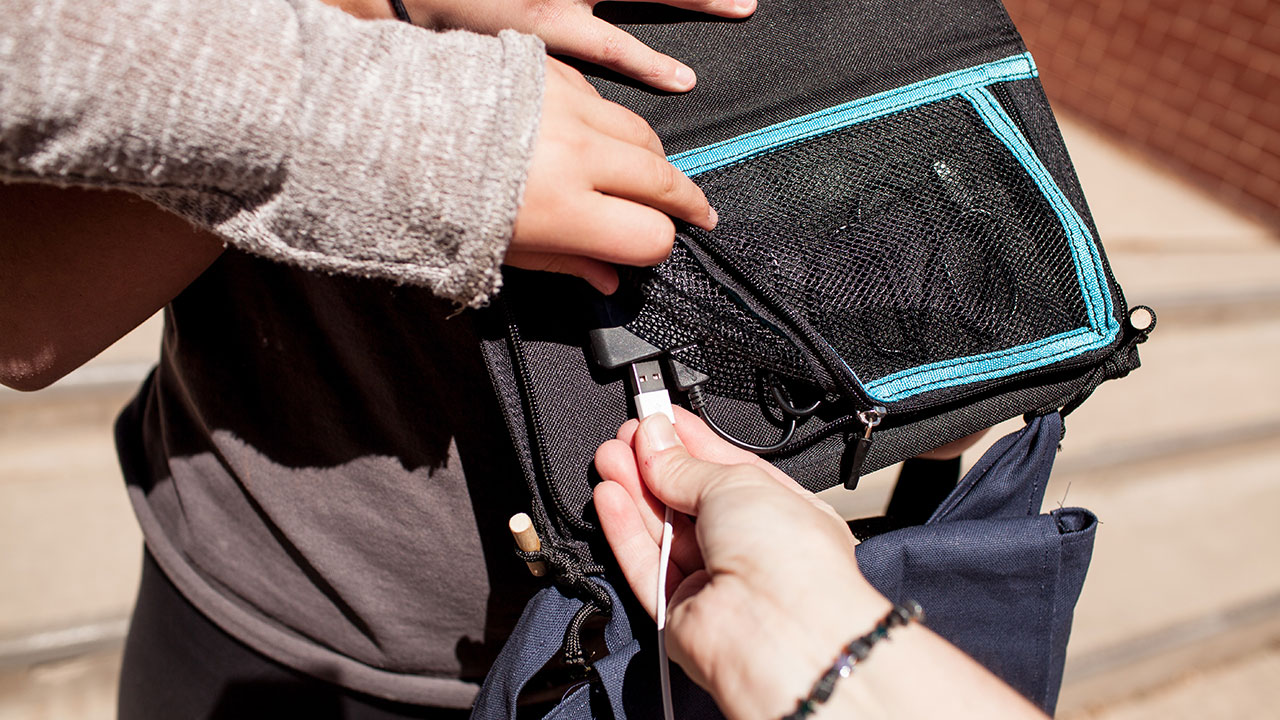 The boys’ backpack had better battery charging capacity while the girls’ design had more pockets and a water bottle holder.

When May 4 arrived, representatives from each team met with Rich and Woody in the school’s Media Center to present their finished products, explaining each step they took to create them.

Each team admired the other’s work. Martinez says that as soon as he saw the girls’ backpack, he thought the girls were going to win. “It had a place to put a water bottle and more pockets,” he says. “It was better than ours.”

Smith had a similar response on seeing the boys’ backpack: “Theirs was very simple. I liked that.” 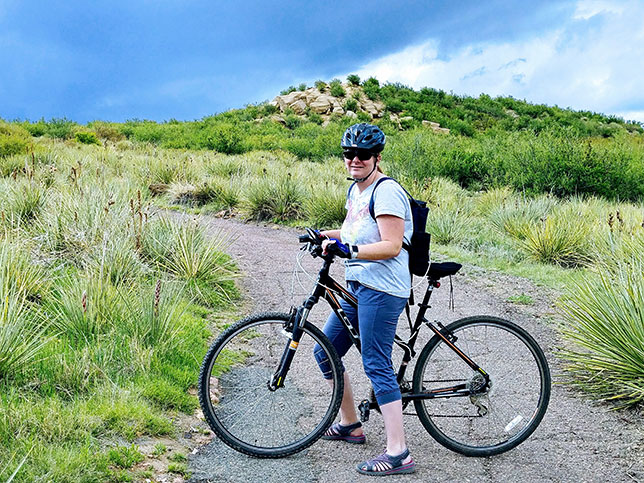 Leslie mapping her cycling miles with the help of the winning solar backpack.

Rich had a hard decision to make. The boys’ backpack was larger with better battery charging capacity while the girls’ backpack was more aesthetically pleasing with well-placed pockets. In the end, form won out over function. 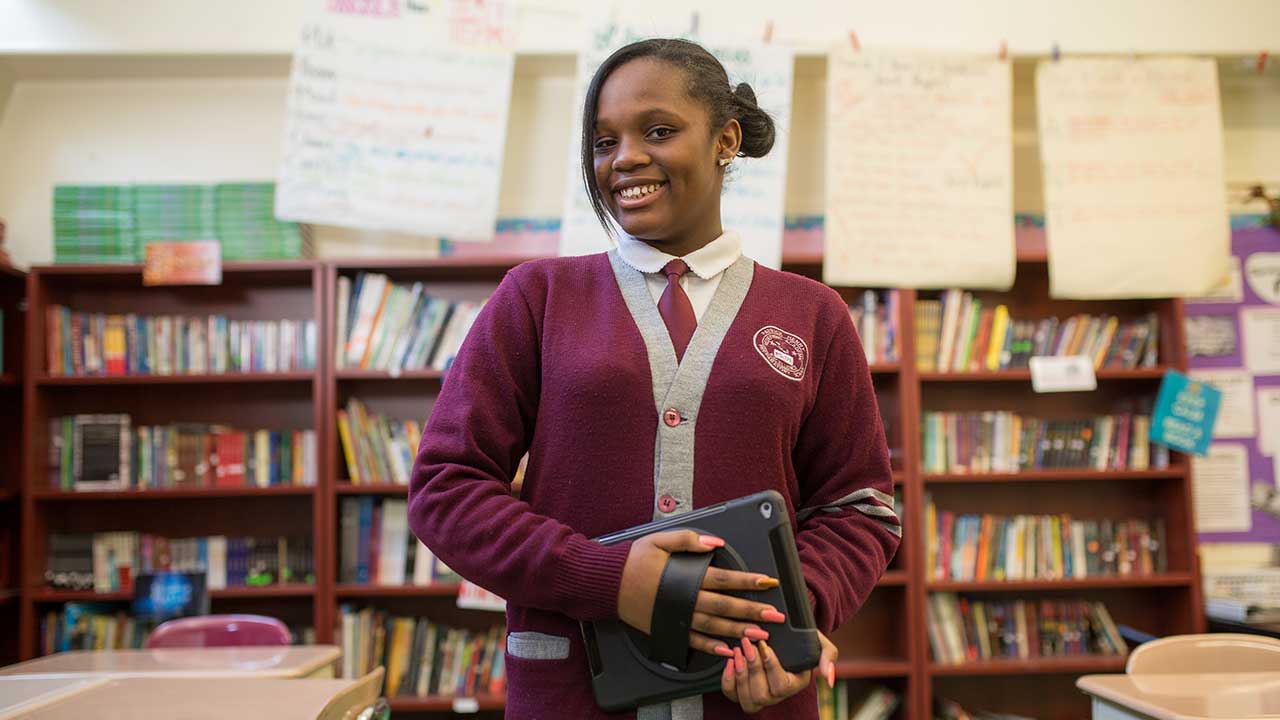 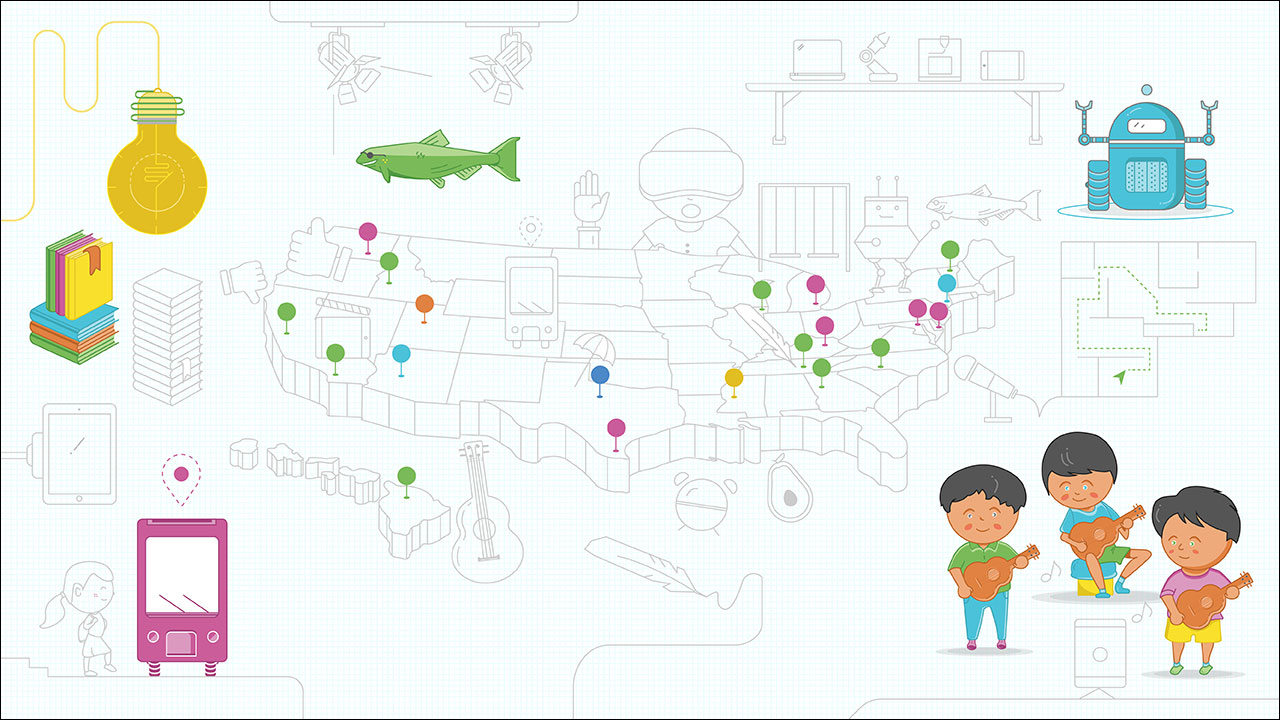