In the midst of the COVID-19 pandemic, a group of five high school friends is using tech to produce and deliver more than a million units (and counting) of protective equipment. 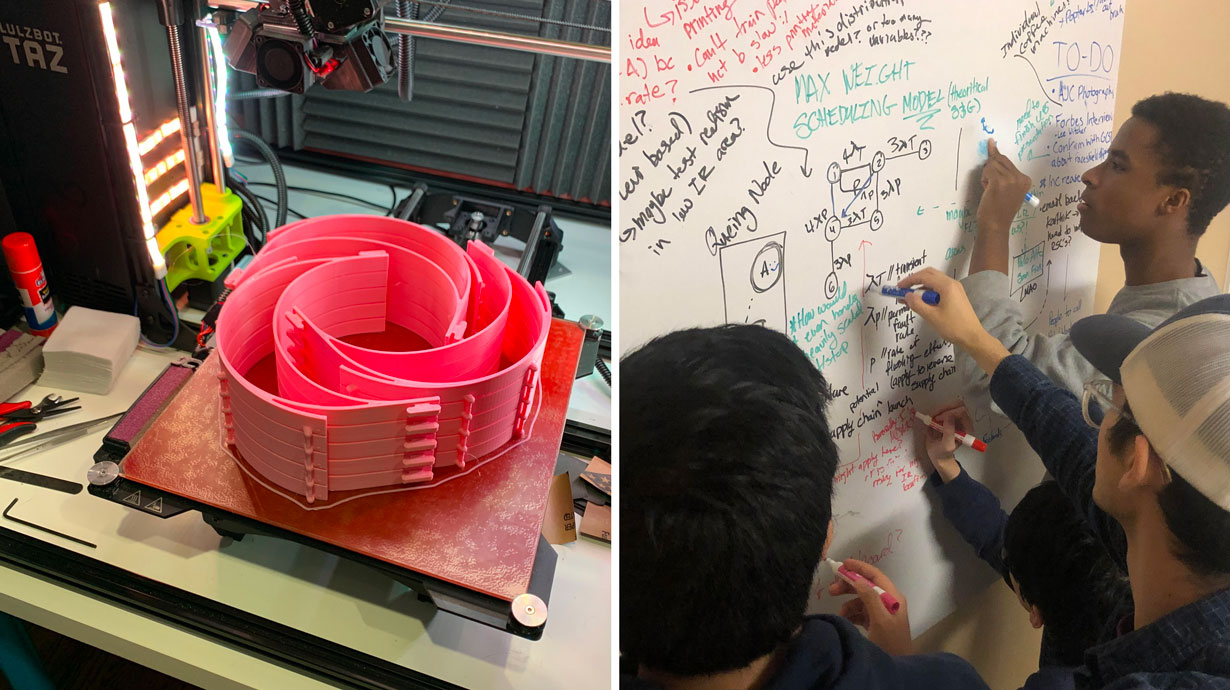 Quarantined in a basement in suburban Atlanta, five high schoolers are living the startup life—whiteboards, Ping-Pong, a treadmill and lots of bottles of Mexican Coca-Cola. In between their senior year of online classes, they are solving one of the biggest crises of their lifetimes: a lack of personal protective equipment (PPE) in the middle of a pandemic.

As of September 21, more than 200,000 Americans have died from COVID-19, with the number rising every day. And the US is still far short of the 3.5 billion units of PPE that public health experts say is needed this year.

In an area that has been hit hard by the virus, these young men have launched a localized disaster relief startup called Paralink that has delivered more PPE than FEMA—all before their 18th birthdays. 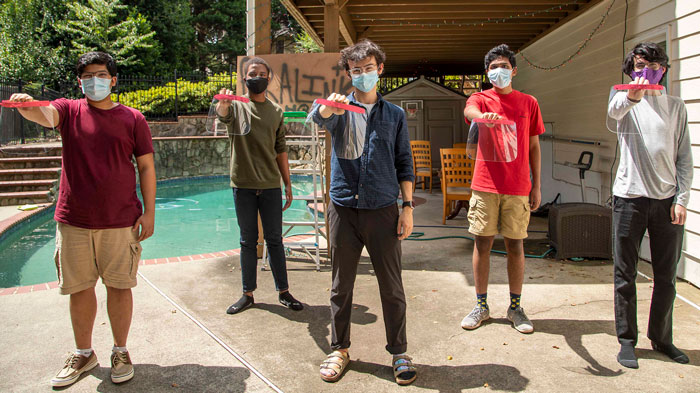 Paralink utilizes the power of small-scale, decentralized manufacturing and their very own mobile dashboard and algorithm. To date, they have produced and delivered more than a million units of PPE to hospitals, high schools, nursing homes and individuals across nine states with the help of more than 1,000 volunteers—many of whom are under the age of 20.

Flipping a startup to fight the pandemic

Paralink didn’t set out to be one of the largest US producers of PPE. In fact, they were just trying to help their teachers get an affordable lunch. In a high school robotics class, the founders came together to write their own algorithm for a meal delivery app that would optimize delivery routes for drivers and pass savings on to the end users—their hard-working teachers with limited time for a lunch break.

On the day it launched, 80 teachers were signed up. That same day, the school was shut down due to COVID-19.

Nearby hospitals started filling with COVID patients. And healthcare workers were making public pleas for more PPE. Co-founder Shourya Seth’s cousin, a local doctor, was among them.

“He was wearing the same mask for a week,” says co-founder Edward Aguilar. “He called us after a 24-hour shift almost on the verge of breakdown because they had no beds, they had no supplies, and people were getting infected left and right.”

Paralink saw an opportunity to use their existing algorithm and a decentralized network to deliver life-saving PPE.

Decentralized production: working together from a distance

The five friends reached out to Ivy League professors and asked for advice. Their recommendation for a safe and low-cost alternative to the current model? Decentralized manufacturing using 3D printers. Because of the virus, says Edward, “we couldn’t have a lot of people stuck in a traditional manufacturing setting.”

The idea was a network of hundreds of individuals, producing face shields from the safety of their own homes.

After securing a deal with a Czech-based 3D printer company, Paralink has now provided more than 3,000 printers to volunteer producers.

With Paralink’s model, an individual printer can produce up to 200 face shields per day. Photo credit: Paralink

People who are willing to produce face shields register on the Paralink website with their availability and location. If Paralink receives notifications of a need for PPE in that area, they will send volunteers the money to purchase the printer themselves.

“It takes a massive amount of trust in our volunteers to not only fix this crisis,” says Edward, “but also proves this new model. Distributed manufacturing has been done in the past, but it has not been done on this scale. And so for this to work, we need to be able to allow as many people as possible into our system.”

To date, Paralink has engaged over 1,000 volunteers. And it all started on WhatsApp groups. “The Indian community in Atlanta is super tight knit,” says Shourya. “I put it out in my WhatsApp family chain, and it spread to other group chats. I talked to Edward about it, ‘Like, you could try it out with your Italian and Venezuelan community as well.’ And it spread from there.”

“The next day we got 40 people that were like, ‘Hey I want to help.’” says Edward. “We’ll post a photo of what we’re doing on social media, our friends share it, and that’s how we got a ton of high schoolers and college students volunteering.”

Twenty-two Paralink high school chapters have launched nationwide from California to New York and rural Georgia. “It’s not just to produce supplies,” says Edward, “it’s to learn about how we produce supplies.”

“We’re trying to make everything we do available to as many people as possible,” says co-founder Michael Giusto, “so that they can re-create their own miniature versions of Paralink in their schools and in their communities.” It’s an open source approach that—in turn—leverages caring individuals operating in isolation. 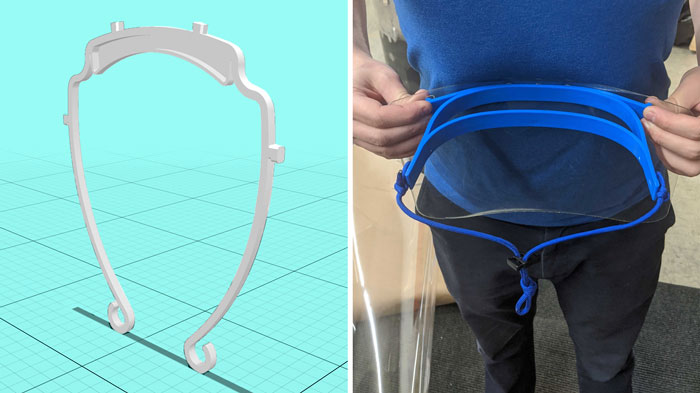 Paralink has 19 different designs of their face shield, all of which are available on open source platforms. Photo credit: Paralink

Pandemic-proof supply chain: how it works

Paralink volunteers, many of whom use several 3D printers, can print and produce as many as 800 face shields per day. Once they’re ready, volunteers log in to their Paralink dashboard and report how many shields they have ready for pickup. Drivers then come by their house and pick up orders for delivery.

“Our dashboard,” says co-founder Sahan Reddy, “communicates with our back end to see all the information coming in: how much PPE is needed in the community, and where.”

“We get a lot of those numbers from Get Us PPE,” says Edward. It’s a site that takes urgent PPE requests from frontline workers in need.

“Every morning, our system texts the drivers, ‘We have four routes for you,’ and it automatically matches the routes with the drivers based on their preferences,” Edward says. “Let’s say a driver is only willing to go 30 miles in a certain direction, but they don’t want to go through a particular part of town. We mark all of that. If a driver has limited cargo space, we can see how much. We give them the estimated amount of time and gas cost, which we pay back to them after they’ve finished the drive.”

“A huge part of this whole thing working,” says co-founder Jordan Umusu, “is the fact that we have these amazing drivers who are able and willing to go sometimes 12 hours in a day just to get these deliveries done.”

The same barriers to manufacturing and distribution during a pandemic also exist during disasters. Using their system of decentralized manufacturing, Paralink sees an opportunity to deliver relief and prevention during natural disasters like hurricanes. 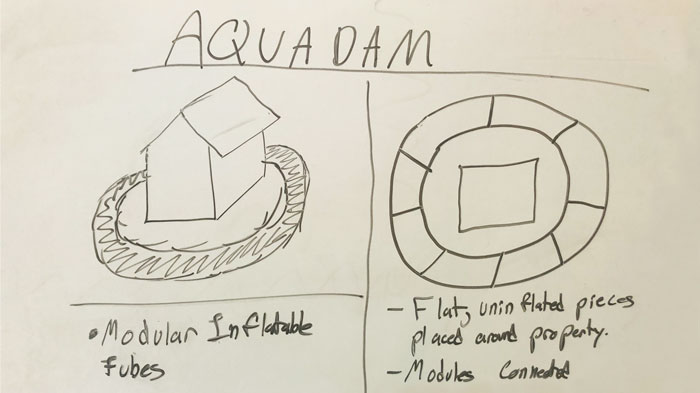 The team looked at data from hard-hit areas to find structural deficiencies in homes and found two ways that their network could produce structure-saving products.

The first is a roof harness. “During a hurricane,” says Shourya, “we found that if wind takes out the roof, it’s going to take out everything else as well. So, for houses that have extremely weak screws or connections to the roof, we would attach harnesses from the roofs to the ground and make sure it stays on.”

The second structure saver is the aqua dam. “Think of it like an inflatable tube around your house that’s filled with water,” says Shourya. “It makes sure that none of the flooding comes into your house but goes around it.”

“We can use isolated manufacturing to produce these products because they’re very simple solutions to very hard questions,” says Edward. “Right now the majority of hurricane relief is relief. It’s not very preventative. They don’t go out there and provide a structure for each house; that would be a logistical nightmare. So when we get past this whole COVID thing, we want to start producing supplies to help people who weren’t able to afford—or didn’t buy—a house with a concrete frame.”

Even though Paralink’s decentralized networks are nimble and adaptable, the team imagines a more efficient system where they have some foresight on demand.

Paralink is programming the AI bot to read through thousands of virology research papers that predict how many COVID cases there will be in the near future. “We take these thousands of ideas,” says Edward, “meld them together, and make more accurate predictions.”

The bot isn’t finalized, but Paralink is hopeful that they will soon have a model that can be used in a variety of applications, and save lives, no matter where you are.

“One good thing COVID did is unite a lot of the world together in the face of a common enemy,” says Sahan. “Just having so many people getting together to try to work on the same problem.”

“The majority of our team, as you can see, are all immigrants from other parts of the world,” says Edward. “Most of us are first-generation.”

Want to amplify Paralink's impact? Share this story with your community.

“To me,” says Michael, “this just seems like the humane thing to do.”

Since partnering with Riot Games in 2020, Verizon has maintained a long-standing commitment to addressing barriers in diversity and representation within the gaming industry. 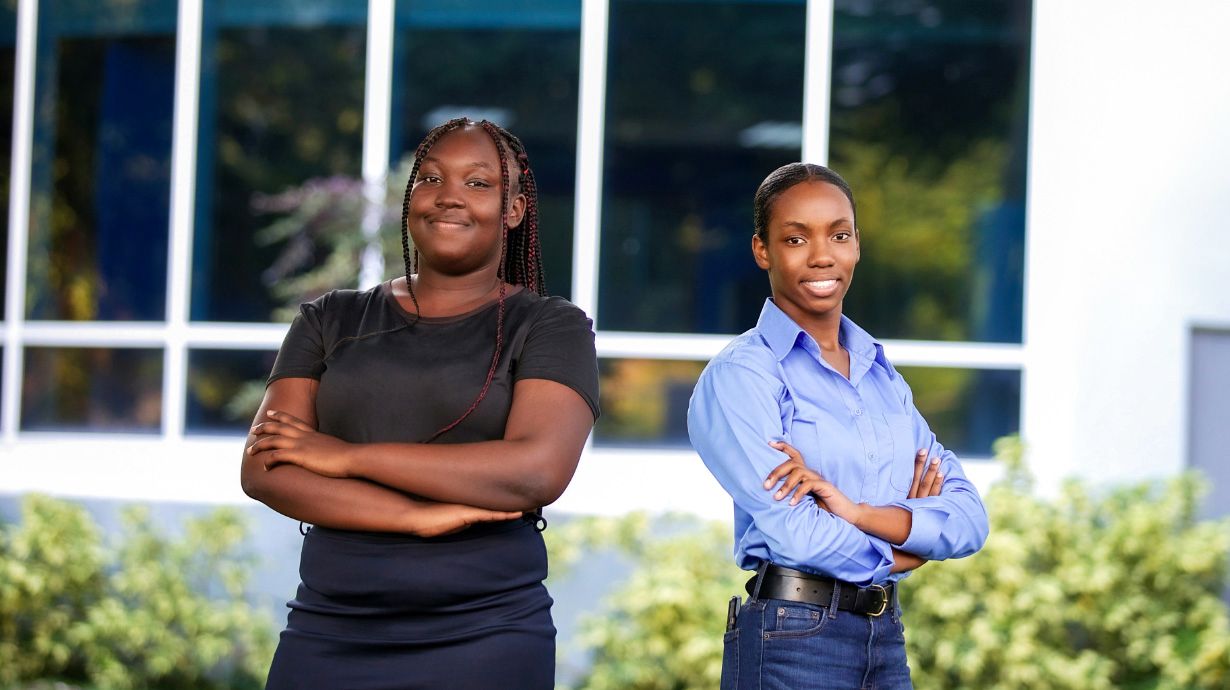 Through mentorship, Verizon volunteers are helping young women around the world excel in STEM
11/21/2022

Brianna Hanson and Princess Gaynor improved their professional development with the help of V Teamers volunteering with the EQUALS Her Digital Skills e-mentorship program.