Inspired by a Friend

Their road to the White House started with a tweet.

Maggie Bolado, a science teacher new to Resaca Middle School in Los Fresnos, Texas, noticed the message on her Twitter feed. It was from the Verizon Foundation.

“Enter our Design An App Challenge and win $20K for your school,” it said, or something just like it.

“And good gosh,” Mrs. Bolado thought, “I need so much technology for my classroom, and we can use that money.”

Her gumption proved infectious. Before long, she had corralled 35 kids to meet every morning before school, from 7:15 to 8:30, Mondays through Thursdays, to brainstorm ideas for a mobile app that would help their communities.

The inspiration for the winning app was 12-year-old Andres Salas, a blind classmate and friend. The idea was to use a variety of digital tools, such as a compass, scanner, voice-over, optical Braille readers and Google indoor navigation technology, to help guide blind or visually-challenged students around their school.

The “Hello Navi” app, designed by an all-girl team, won the 2014 state competition for middle schools; then the South Region competition -- one of three middle-school winners.

And then Resaca was one of four middle schools named Best in Nation. Four high schools also won that honor, for a total of eight winners out of 1,300 entrants nationwide.

In April, an adviser from the Massachusetts Institute of Technology came to the school for three days to teach coding to Mrs. Bolado and her students, who then worked after school through the rest of April and May to have a working product by the due date of June 1.

It was a galvanizing experience for a small school, just miles from where the U.S.-Mexico border meets the Gulf of Mexico. Although only 11 and 12 years old, the students are already thinking more seriously about themselves and their future careers and have expressed a newfound interest in science and technology.

The six girls on the winning team are also seeing the enormous opportunity that STEM studies can bring. In addition to basking in their prizes of tablet computers and the unexpected perks of getting to miss class for a celebratory assembly in the gym; the attention of the country, and now the White House, has been turned to these six girls from a tiny town in Texas.

“When they started, little did they know they would be affecting people all over the world,” marvels Asael Ruvalcaba, principal at Resaca Middle School.

"The App Challenge “definitely changed my thoughts about technology.” - Jacquelyn

The team has made appearances everywhere from local TV to People Magazine. And on Tuesday, May 27, 2014, they will participate in the White House Science Fair in Washington D.C.

“It’s been an awesome experience,” says Mr. Ruvalcaba, “from beginning to end.”

Teachers from other districts are flooding Mr. Ruvalcaba with job applications. Mrs. Bolado is using the prize money to buy field equipment to take science classes outdoors and is budgeting for a 3-D printer.

The App Challenge shows that, in today’s wired world, no town is too small or too out-of-the-way. Anyone, with the right education, can make a big difference.
“With technology nowadays,” Mr. R. says, “we have everything in the palm of our hands.”

It’s a remarkable achievement, but Mrs. Bolado swears it is only the beginning. There are, for example, those other ideas that Resaca students came up with. They, too, are worth developing: an app for navigating the college admissions process, from virtual campus tour to completed application; a heart-attack prevention app to measure your heartbeat and if, God forbid, you’re having a seizure, to call 911; a grocery shopping app for the handicapped.

“We’re going to continue building apps,” Mrs. Bolado says. “They don’t know what they created. They created a monster down here.” 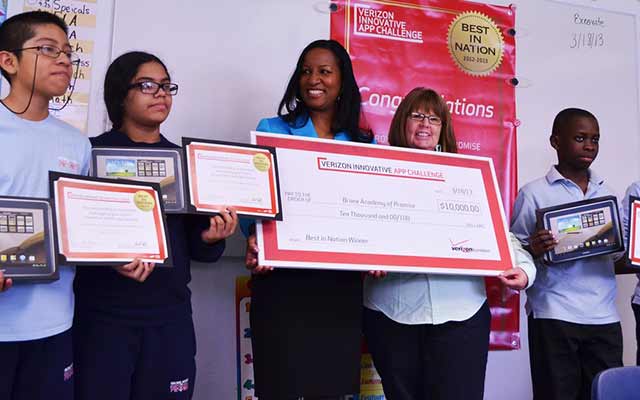 Making Math Fun
08/10/2014
Meet King, Jhony, Rokia, members of a sixth-grade team from the Bronx that was one of 10 national winners last year in the Verizon Innovative App Chal