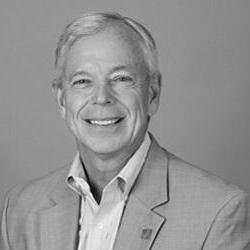 Lowell C. McAdam is chairman and former chief executive officer of Verizon Communications, a leading provider of wireless, fiber-optic and global Internet networks and services.  He was named CEO on Aug. 1, 2011, and chairman on Jan. 1, 2012.

Effective August 1, 2018, Hans Vestberg will succeed Lowell C. McAdam as CEO. McAdam will serve as Executive Chairman of the Verizon Board through his retirement at the end of the year, at which time he will become Non-Executive Chairman.

Prior to that, McAdam was Verizon’s president and COO, with responsibility for wireline and wireless operations. He was also responsible for internal services and the technology management and CIO functions.

Under his leadership as CEO, Verizon took over complete ownership of Verizon Wireless by purchasing Vodafone’s 45 percent stake in the company, positioning Verizon for a new phase of wireless growth.  He is also leading the company’s push into growth markets in the Internet of Things and digital media.  In April 2017, Verizon launched Oath, formed from the company’s acquisition of AOL and Yahoo, which houses more than 50 digital and technology brands that together engage 1 billion people worldwide.

McAdam is one of the architects of today’s global wireless industry, having built wireless businesses on three continents since the technology’s development in the 1980s.  He was president and CEO of Verizon Wireless from 2007 until 2010 and before that served as its executive vice president and chief operating officer.  Before joining Verizon Wireless in 2000, McAdam was president and CEO of PrimeCo Personal Communications, a joint venture owned by Bell Atlantic and Vodafone AirTouch, where he oversaw the deployment of one of the industry’s first all-digital networks.  He also served as vice president-international operations for AirTouch Communications and was lead technical partner for cellular ventures in Spain, Portugal, Sweden, Italy, Korea and Japan. Prior to joining AirTouch in 1993, he held various executive positions with Pacific Bell.

McAdam is a member of the Cornell University Board of Trustees, where he chairs the Cornell Tech Board of Overseers and sits on the executive committee.  He has co-chaired the CEO Council on Health and Innovation, which encourages the adoption of innovative strategies to improve employee health and the delivery of higher-quality, more cost-effective healthcare.  Previously, he was a member of the GE Board of Directions, and he was a director of the National Academy Foundation, a partnership between business leaders and educators that helps high schools establish technical and service academies to prepare students for college careers.  He also is past chairman of the board of directors of the CTIA, the wireless industry trade association.

He earned a bachelor's degree in engineering from Cornell and a master's degree in business administration from the University of San Diego. He also spent six years in the U.S. Navy Civil Engineer Corps and became a licensed professional engineer in 1979.