Jim Gerace is chief communications officer for Verizon, responsible for all external communications and media relations strategy and execution across the corporation, both domestic and international. He also handles corporate-wide issues management and executive and employee communications.

Before assuming his current post in June 2013, Gerace served as vice president – state government affairs for the New York region for Verizon. He was responsible for the company’s corporate interests including public policy, government and external affairs, regulatory matters and philanthropy in New Jersey, New York and Connecticut.

In 1995 he directed the announcement of the merger between Bell Atlantic Mobile and NYNEX Mobile, then the largest merger in the wireless industry. He was named vice president – public relations and a member of the senior staff of the new business. In 2000, he directed the communications for the merger of Bell Atlantic Mobile and AirTouch that launched the Verizon Wireless brand.

Gerace is Vice Chairman of the board of Inroads of the New York/New Jersey Region, a nonprofit organization dedicated to developing and placing talented minority youth in business to prepare them for corporate and community leadership. Additionally, he is on the board of trustees of Catholic Charities of New York. He is also a past board member of the Business Council of New York State, Choose NJ and The Wireless Foundation.

An advocate for domestic violence prevention, he is also past president of the board of Jersey Battered Women’s Service, a private, nonprofit agency that provides life-saving services to victims of domestic violence.

Jim received a Bachelor of Arts degree in communications from the State University of New York at Buffalo. He lives in New Jersey with his family. 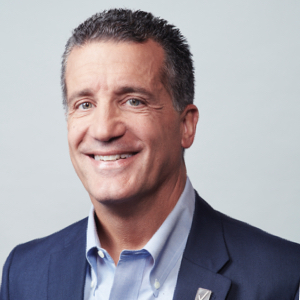