Should children under 2 be kept away from screens?

Experts may be thinking hard about this issue, but they don’t live inside your house. 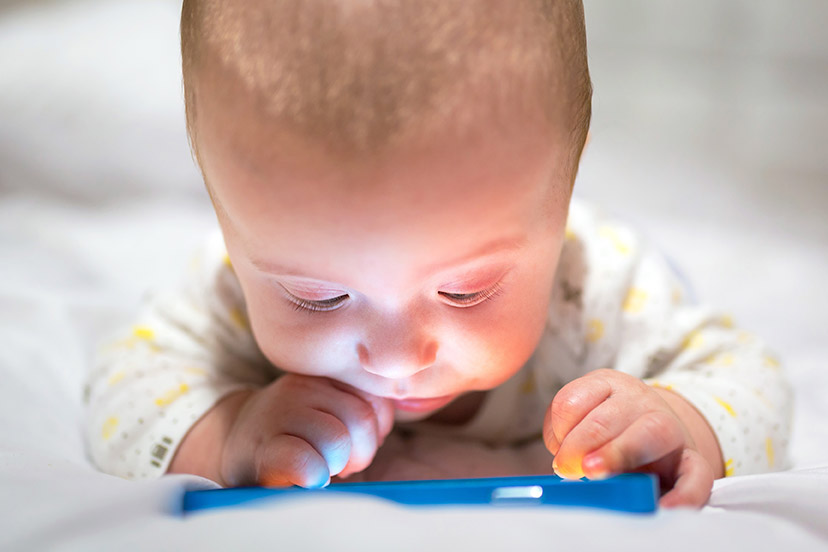 For years, the parenting rule of thumb in the smartphone age was to keep children under the age of 2 away from screens. Phones, tablets, laptops — shield your baby from the glow. But as technology has become more ingrained in everyday life, research and parenting are evolving along with it. Last year, the American Academy of Pediatrics (AAP) updated its guidelines, loosening the restrictions on screens for toddlers.

“It doesn't do anybody any good to just be told what not to do,” Chip Donohue, director of the Technology in Early Childhood Center at the Erickson Institute, says. “Nobody's saying no screens. In our world, it’s impossible to do that.”

Parents have been fighting to keep their kids away from screens for years. And many continue to do so. The long term effects of screen usage are still evolving and the topic of kids and screens continues to be a concern for both parents and publishers. New York Magazine’s Science of Us recently said that screens are “as bad as you think.” In 2015, The New York Times said “screen addiction is taking a toll on children.” And a recent article in The Atlantic detailed the negative impact smartphones and screentime are having on the social life and mental health of Generation Z — those born in the mid-1990s and later. But practices — and even recommendations — on the topic are changing. In late 2016 the AAP tweaked their long-held recommendation that parents keep children under the age of 2 away from screens.

The AAP is the bedrock and benchmark of parenting research. “Their stuff is evidence-based,” Donohue says. “If they don't have the evidence, they aren't going to say it.” The AAP still recommends that children under 18 months “avoid use of screen media other than video-chatting.” And this seemingly minor video-chatting tweak dovetails with what some surveys have found: “FaceTime Doesn’t Count.” Families, surveys found, don’t consider video chat necessarily as screentime.

And experts agree. There’s been some research, Donohue says, that shows that a socially contingent interaction — say, your 16-month-old baby video chats with her grandma on your smartphone — that toddlers learn language in that setting. “Which is a huge finding because we have 25 years of research that suggests that screens don't teach toddlers language,” Donohue says. “This was a breakthrough because it suggests that the screen becomes a mediator only. That's not a screen experience. It's not passive — it's Grandma. And language is being learned in a family context from a loved one.”

Screen use can become problematic when it turns into a habitually passive exercise. Plopping a tablet in front of your child to keep them quiet and leaving the room. Turning on a mindless app. This is not a new phenomenon. And, if you’re intentional about your use of screen time, it can be a net positive for your child.

But screen use, just like TV, can work as both an educational tool and help foster family bonding. Donohue is a self-professed sports nut, and his daughter became one because she embraced it from a very young age. But he didn’t just sit her next to him on the couch and yell at the umpire while his toddler stared into space.

“There was conversation and there was an explanation of what was going on and there was excitement when my team did well,” he explains. “It became a more social interaction. It wasn't just sit quietly and stare at the screen. And I think that's the number-one thing for parents to understand. We have all this new media, all this digital media that is in fact highly interactive. How do we use it well?”

The experts agree: Intention is the answer. Be deliberate. Interact with your child, whether it’s FaceTime with an uncle or an educational game on a tablet. “If we're clear with kids about, ‘Hey, we're going to play the game for a few more minutes and then we're going to turn it off and we're going to play a game together,’” Donohue says. “That's a different — and more positive — experience.”

About that work email…

Children are impressionable. This applies to technology as much as it does table manners. According to Donohue, adult media behavior and usage is an equal part of the equation: “I'm more concerned about how the parent uses media than the child. How an adult uses media in front of their young child teaches the child how to use media.”

That doesn’t mean your 16-month-old is going to pick up your phone and start sending work emails. But behavior is learned and technology can disrupt parenting.

“It's as much about what the parent does as what they say,” Dr. Michael Rich, director of the Center on Media and Child Health at Harvard University, says. “Because ultimately, that will teach them to be deliberate and mindful in their use of media in the future.”

The child may still be young, but even under the age of 2 they are observant.

“So if the parent is obsessed with the screen, if the parent can't stop looking at the text messages as they come in, or interrupts a play time with their child to go check their email,” Donohue continues. “Then that's more problematic to me because that's getting in the way of the relationship. In other words, because I don't put my screen down and I don't put my phone away even when I'm playing blocks or doing art with my kids — the potential for an interruption is so high.”

Parenting is not easy. It’s prioritized chaos. And very occasional passive use of a tablet is a byproduct of juggling parenting with a hectic schedule. But the key is that it’s very occasional. It should not be a regular thing.

“The key here is to understand that anything in occasional use isn’t going to hurt your child or infant in any way,” Grohol says. “So if you occasionally need to sit an infant in front of a tablet to watch a video or something, there’s no evidence that that would result in any problems with the child.”

Remember: Every family — and every child — is unique

“Every child is different,” Dr. Rich says. “And every child's needs or the demands on them in their life is different.”

Parents should treat research and anecdotes as guidance. Take it all with a boulder-sized grain of salt. There are times for screens and there are times for no screens — it’s up to parents to decide what’s best for their family and each individual child.

“I think parents need some help really thinking about how to make choices that are theirs, that are honest and authentic for their own family,” Donohue says. “But these are guidelines and they're important to pay attention to and they're smart people thinking hard about these issues, but they don't live inside the walls of your house or apartment, they didn't give birth to your kids.”

Visit the Family Online Safety Institute for more screen time recommendations for kids of all ages. And be sure to check out a complete parents' guide to kids and tech on Verizon's Family Tech page.