What would you give up for six months to be the first to own the new PS4 or Xbox One? How important is access to high-speed Internet service when considering a move? Some of the answers in the latest Verizon FiOS Innovation Index, a survey of consumers’ views on technology and the connected home, may come as a surprise.

We polled more than 900 men and women to gain an understanding of their pain points, desires and interests at the height of anticipation for the releases of Microsoft’s Xbox One and Sony’s Playstation 4. Just under half of the respondents were gathered from registrants to Engadget Expand, a biannual conference for tech fans, and the balance of the respondents came from the general consumer population. Some of the survey results were unveiled this weekend at the Expand conference.

76% already own a video game console, yet they are very interested in purchasing one of the new platforms being introduced this month. In fact, one-third (34 percent) of respondents identified as “hardcore game players” said they would give up their car for six months to be one of the first to get the new one of the new consoles.

“This time of year has historically been great for generations of gamers from the debut of the home version of Pong in 1975, to the release of the PS4 and Xbox One,” said Chris Melissinos, a director of business strategy and development for Verizon, who presented some of the findings at the Expand show. “Gaming and technology continue to spread deeper into society and are becoming a bigger part of our lives. So we wanted to reveal how people feel about the technology they love and what they want to see in their connected homes, which even in today’s mobile world remain the hub of their digital lifestyles.”

What’s on this year’s shopping list? No surprise. Respondents were very interested in gaming consoles just before the start of this holiday season.

A Lot More Than Gaming: Among survey respondents there was a high interest in using their consoles for more than just gaming to access media like video and music as well as shopping and Web browsing. 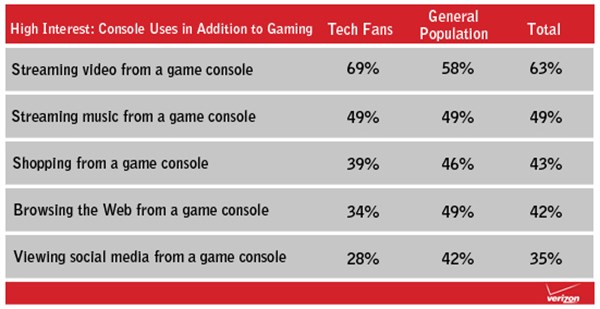 [NOTE: If you like your survey data served in PowerPoint, visit Verizon’s SlideShare page.]

Head in the Cloud?  Yes. Although consumers haven’t yet flocked to the cloud to satisfy their gaming appetite, the majority said they would prefer to access and store their games in the cloud.

Just last year, the 2012 FiOS Innovation Index found that 52 percent of consumers considered their home Internet  the most important service in their house – this year’s 85 percent marks a significant 33 percent increase. 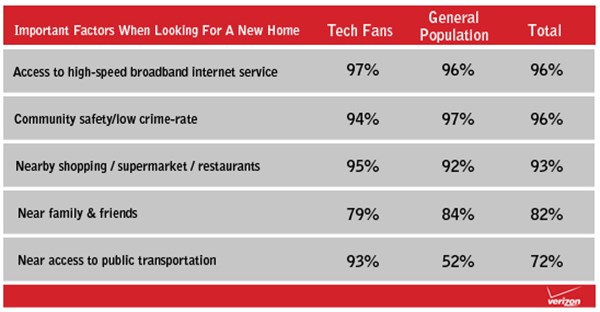 Awareness of high-speed/low latency impact on gaming: The vast majority of all gamers recognize the value of connection speed (bandwidth and latency) to their gaming experience and the majority would prefer a power outage (i.e., no game play at all) over playing over a low-quality Internet connection.

The FiOS Innovation Index: Gamer/Entertainment Series survey was conducted in two parts to reflect the opinions of both tech enthusiasts and the wider population. More than 420 pre-registered attendees of the Engadget Expand conference held on Nov. 9 and 10, 2013, were polled. Also surveyed were 500 U.S. respondents, age 18 and over, balanced by gender and region to reflect U.S. Census figures. Recruitment for both surveys occurred via online panel hosted by USamp from Oct. 28-Nov. 1, 2013. More information on the survey results can be found at www.newscenter.verizon.com/residential.

Check back in the coming days as we share more details from our most recent survey. 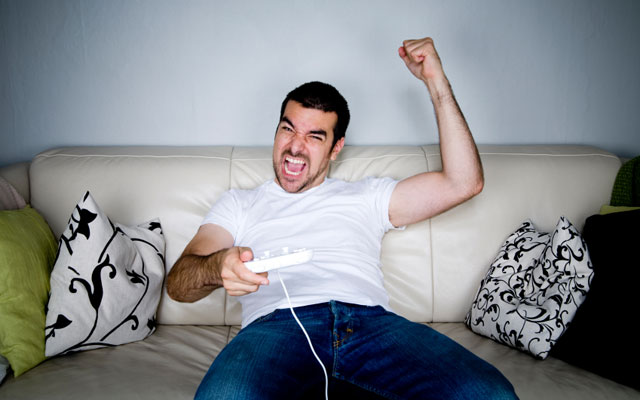 One-Third of Gamers Would Go Carless for Six Months to Be First to Get Newest Game Consoles, a New Survey Finds
11.11.2013 | Personal Tech
What would many people give up to be the first to own the latest gaming consoles? How important is access to high-speed Internet service when considering a move?

Verizon Uncovers What Ails Gamers, Tech Trends In Our Latest Gaming Index Survey
11.08.2013
We surveyed over 500 gaming and gadget lovers and asked, “Do you really need speed?” The FiOS Gamer/Connected Entertainment Index takes a look at how