Remote control robot dogs. Ultrarealistic virtual reality gaming. Gigantic holographic displays. The tech of the future is coming faster than you think, thanks to 5G. 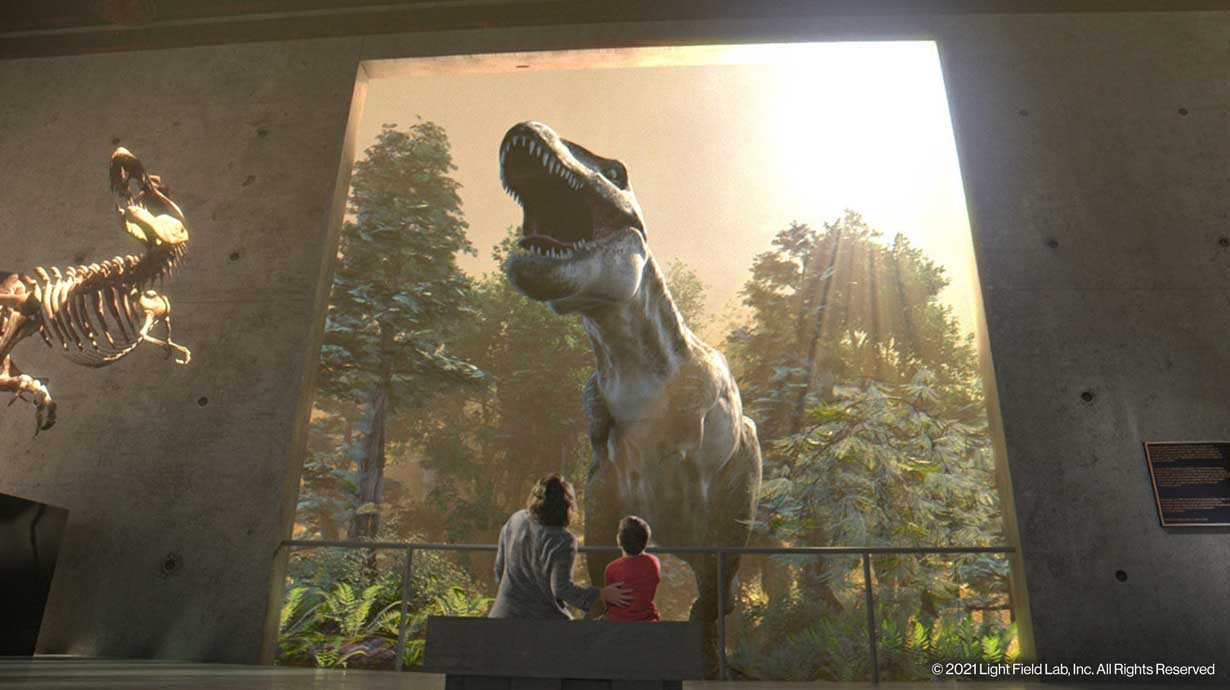 But it’s not all work and no play. 5G technology could also enable several fun, futuristic and unexpected applications as well. For example: bringing a pair of dancing robot dogs to your next big event.

Let’s take a moment to celebrate how awesome 5G is by exploring two examples of how it could with the tech of tomorrow. 5G could bring us a new breed of robotic entertainers and ultra-immersive VR gaming that can make people feel closer together—even when they’re miles apart.

Robot dogs can be the life of your next party.

I don’t know when we’ll be able to congregate safely again, but I have a hunch that the events of the future won’t feel like events of the past. One reason why: robot dogs on your guest list.

The Aigency is a startup company that bills itself as “the world’s first robot talent agency.” They connect robots with people who want them. Their clients include event organizers, marketing agencies and movie producers. 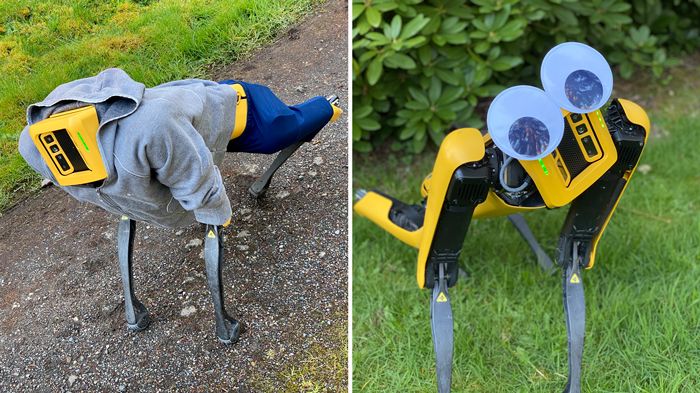 At the top of the Aigency’s talent roster are Zero and One, two Spot® agile robots designed by Boston Dynamics. With a price tag of $74,500 each and technical chops needed to operate them, Spot robot dogs are out of reach for most people. That’s where the Aigency comes in.

“One of the challenges we’ve seen is that people don’t have clear expectations of what these robots can or can’t do right now,” says Jared Cheshier, co-founder of the Aigency.

The Aigency provides the hardware and handling for their dynamic doggy duo to meet their clients’ needs. While the company originally envisioned deploying Zero and One at live events, the COVID-19 pandemic threw a wrench in that business plan.

The Aigency pivoted to advertisements and videos. They launched a TikTok channel that’s racked up millions of likes and views. It serves as a reel for their robo rovers, featuring Zero and One dancing, skateboarding, goofing around with googly eyes and more.

When it comes to the movie business, the Aigency consults with filmmakers to ensure their vision aligns with the robots’ capabilities. They also provide on-site technical support and operation so that every shot is picture-perfect.

When Zero and One perform in front of the camera, their handlers are behind the scenes using a computer or controller to operate over Wi-Fi. Film productions can occur in a wide variety of environments, including remote locations, which means these robot dogs need a wide coverage area with high bandwidth and low latency to reach their full acting potential. This is a potential opportunity for 5G.

With the high bandwidth and low latency afforded by 5G, robots could take better advantage of compute resources. This could enable them to process more data in real time, learn new skills and better communicate with other robots and humans. In the same way that 5G might power telemedicine and search and rescue robots, it could also help robot dogs like Zero and One deliver an award-worthy performance.

But the work doesn’t end when the camera stops rolling. “Robot actors can show up to an event alongside all the other actors,” says Cheshier. “For a premiere, for a red carpet event—they’re just part of the cast.”

Imagine the possibilities with remote-controlled 5G robot dogs when it comes to live events. Amaze your top clients at a corporate conference. Surprise guests with a robot dog at your wedding. Could we someday see a robot ring bearer walk down the aisle?

A new startup is bringing down costs, reducing the technical burden and opening up high-end VR access to the masses.

Until recently, there’s been a tradeoff between PC-based VR systems and standalone VR headsets. PC systems offer higher performance and a broader selection of games, but at the expense of a higher price tag and less mobility. Standalone VR reduces performance but offers greater portability, convenience, and a lower price.

“PlutoSphere opens up access in VR, allowing consumers to experience content regardless of their device,” says Forest Gibson, co-founder of Pluto VR. “Now you don’t need to spend thousands of dollars on gaming rigs to play popular PC VR titles.”

Instead of using a desktop PC in your living room, PlutoSphere makes use of cloud computing—the use of computer system resources hosted on a third-party data center. By offloading the heavy lifting of graphics rendering from the VR headset to high-performance cloud instances (virtual machines that run on the cloud), PlutoSphere streams high-end visuals typically seen on PC-based VR setups. 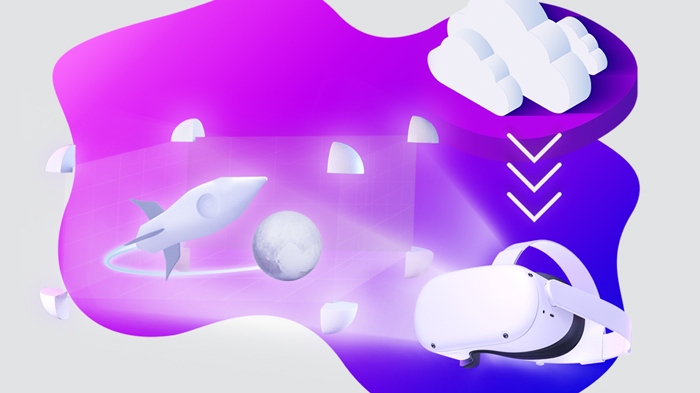 This approach empowers users to move wirelessly, without sacrificing the fidelity of the VR experience. In short, it’s VR without compromise: the high performance and game selection of PC-based VR with the portability and low cost of standalone VR.

PlutoSphere requires internet speeds of at least 50 Mbps to operate, though faster is better. As any gamer will attest, you want as little latency as possible while streaming immersive games.

As VR hardware, immersive software and networking capabilities evolve, we’re witnessing the assembly of “the Metaverse”–the term used to describe a successor to the internet that’s made up of interconnected virtual worlds. Some futurists and sci-fi authors foresee a future in which consumers spend a significant portion of their lives plugged into the Metaverse, sharing 3D virtual spaces to meet for coffee, socialize or go to a virtual comedy show.

3D holograms were once limited to the realm of science fiction. 3D movies have existed for decades, but they require the viewer to wear glasses and they only present one perspective of the captured image. And although VR technologies provide gamers with immersive, 3D experiences, they still require headsets. Glasses- and headset-free holographic displays are a more recent innovation. These enable an observer to view an image from multiple angles and vantage points with a sense of depth. But advanced holographic displays have been limited to niche uses for researchers, technologists and developers. Until now. 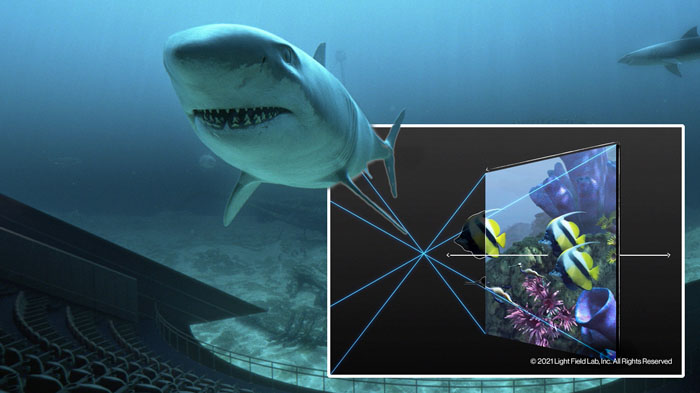 Light Field Lab is creating displays that can work as a single panel or the displays can be stacked to create the feeling of a whole wall that projects 3D images. Photo credit: Light Field Lab (future vision concept art of holographic cinema display)

Light Field Lab is on the forefront of holographic displays. In the prototypes they’ve shown to journalists, people have been amazed at the realistic holograms of butterflies in the air or fish and seahorses swimming through water. The size of the butterfly shifts as the viewer moves closer or further away — just as it would in real life. You can even use a magnifying glass on the display, and it will let you zoom in on the butterfly’s wings.

“Our technologies project dimensional objects that accurately move, refract and reflect in physical space,” says Jon Karafin, CEO of Light Field Lab. “More simply stated, we project objects that create the same light that would have reflected from the real thing.”

The company is currently working on 22-inch by 20-inch displays. And eventually they plan to create whole walls that could be placed inside museums or entertainment venues to create showstopping experiences for visitors. But these displays will require a huge level of bandwidth that only 5G can provide.

“To help put this into perspective —  you’d need about 80,000 smartphones to get close to the photonic resolution generated by Light Field Lab’s wall-scale holographic display,” Karafin says. “Although you do not actually transfer all of that raw bandwidth, 5G will be key to delivering the holographic future.”

One day, one of these displays could replace cinema screens or the television in your home. But currently, films and television shows aren’t made to take advantage of a holographic display. But that’s coming too.

A few forward-looking Hollywood-based production companies have partnered with Light Field Lab to produce content for the displays. And Karafin helped form the Immersive Digital Experiences Alliance to configure technical specifications for holographic content so that filmmakers and developers can easily understand how to create for these futuristic displays.

But Karafin believes the wait will all be worth it. “An encounter with Light Field Lab’s holographic objects will be unlike anything you have experienced before,” he says.

At the end of the day, technology is about improving our lives. 4G enabled a whole host of improvements that we now take for granted. Photo sharing used to be a pixelated chore. Now it’s second nature. We can have food delivered to our door, summon a car on demand, stream movies to our phone and upload videos to social media with the tap of a button.

No one predicted these lifestyle upgrades when 4G was deployed a decade ago, just as no one knows what the future will look like after a decade of 5G.

Will we all be playing fetch with robot dogs? Will we be immersed in a photorealistic VR Metaverse? Will we get to see a fish swim right off a holographic wall?

I don’t know what the future holds, but I’m optimistic about what’s ahead. The Aigency, PlutoSphere, Light Field Lab and thousands of other teams large and small are pushing the boundaries of their respective fields. And 5G is like a supercharger for these emerging technologies, making them better, faster and more fun for everyone.

Ready for the futuristic fun 5G will bring? Share this story.

Mitrak is a marketer and storyteller based in Seattle, Washington. He was selected as a lead artist at the Sundance Film Festival and he has lectured on VR and haptics at MIT Media Lab. As owner of Mitrak LLC, he helps companies at the intersection of media and emerging technology.

City leaders can now predict the future with 5G
02/23/2021
Digital twins are data-enabled city models that city leaders can use to simulate real-world urban stressors from traffic to natural disasters. 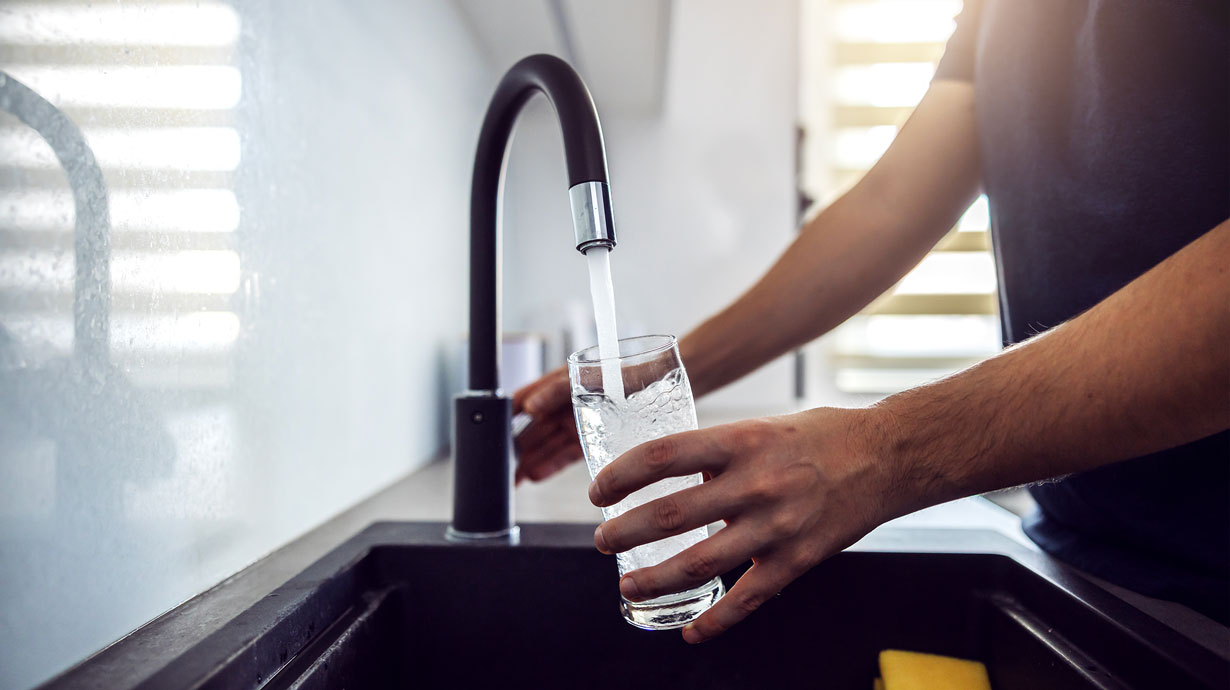