For Same-Sex Couples, Workplace Benefits Are the Great Equalizer

Many couples just starting their lives together share a lot of the same ambitions and concerns: They hope to start a family, but worry about the financial challenges it will bring. That’s why many rely on their employer-provided benefits to help manage the healthcare and other costs associated with raising a child.

But to the lesbian, gay, bisexual and transgender community, that isn’t necessarily an option because benefits like family-wide health insurance and adoption assistance are not always available to same-sex couples. After all, not all companies are like Verizon.

That’s because we don’t view our LGBT employees as a separate community, but instead as an integral part of our inclusive and diverse culture, where everyone has the same opportunity and a seat at the table no matter their ethnicity, gender, sexual orientation, background, experience and viewpoints.

Whether it’s extending health benefits to their spouses and children, or receiving up to $10,000 in adoption assistance, LGBT employees at Verizon receive the same generous benefits enjoyed by all other employees.

Take, for example, Verizon’s Daniel Richani, whose previous employer did-not offer benefits to same-sex couples. He eventually met Verizon employee Craig Cadogan and saw first-hand the benefits we offer. “It was almost foreign to me that a company would be so supportive to someone who was out in the community and at work,” said Richani.

Cadogan and Richani got married and started a family together, and Richani eventually got a job with Verizon.

Verizon is a champion for LGBT rights and has twice received a perfect score on the Human Rights Campaign Foundation’s Corporate Equality Index recognizing us as a leader in providing LGBT-inclusive employment policies and supporting equality for the community. A Verizon employee resource group -- Gay, Lesbian, Bisexual and Transgender Employees of Verizon and their Allies, also known as GLOBE -- has 549 members and provides a support network for LGBT employees across Verizon.

Verizon Recognized as a Top Employer for People With Disabilities
02.05.2015 | People
Verizon was honored by being named to Careers and the disABLED Magazine’s Top 50 Employer list. 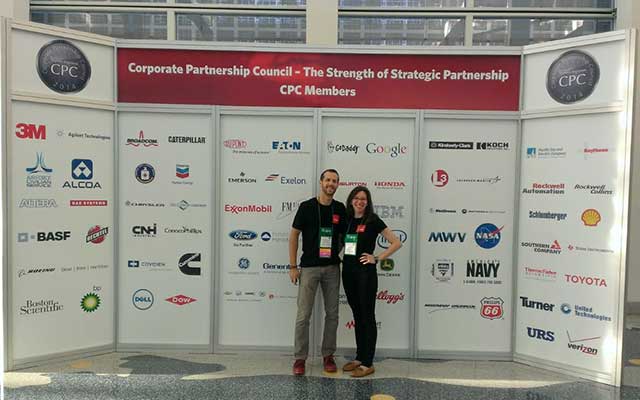 Women are Engineered to Succeed in STEM
12.12.2014 | Corporate Responsibility
Nearly 8,000 women engineers, scientists and college students from around the world attended the 2014 Society of Women Engineers