Coding Creativity and Confidence | About Verizon 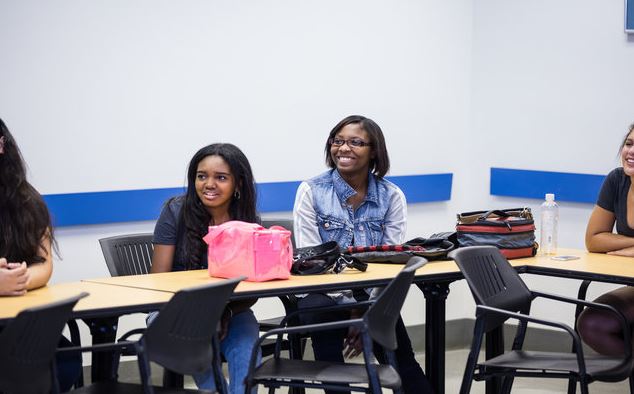 For seven weeks, 33 high school girls spent seven hours a day in classes five days a week, giving up beach days and trips to the mall to make little robots dance and to learn Python, IDLE, Calico and Myro — the languages that make computers, smartphones, scanners, elevators and just about anything else in the modern world do our bidding.

“A computer is more than a social-media connector, you know,” said Maria Mejia, 15, born in Colombia, where her dad was an aerospace engineer. “It’s this amazing device you can make to do anything.”

They were girls like Marie Fouché, who immigrated to Miami from Haiti with her mom and started kindergarten speaking only Creole and French, learning English from watching cartoons on the Disney Channel and reading books from the library, piles and piles of books. She grew to be enamored of computer games, then to play with the web-writing language HTML.

Marie, 17, soured on her high school’s robotics club when “two boys dominated the whole thing.” Still, she’d been unaware of the severity of that dominance, which sees four times as many boys as girls taking the AP computer science test, according to U.S. News.

“I would have gone to M.I.T. and walked in, and thought I was in the wrong room!” Marie said, picturing herself at her dream school.

Girls Who Code introduced her to the gender gap. Guest speakers, including six female Verizon executives, gave her strategies to cope with it.

Now, she says, she’s prepared for anything. “I’m as creative as any guy, and as smart as any guy!”

“But I was thinking about it,” she continued, “and everything that computer scientists and engineers make is loved and appreciated by society, so the stereotype obviously isn’t true. Because people who weren’t similar to you could not be making things that you love to use.”

Few of these girls had much background in computers before starting the program. But by the finish nearly all said they wanted to study computer science in college or pursue it as a career.

Shahrine Islam, born in Bangladesh and raised in Fort Lauderdale, had thought she’d be an artist. Now the 17-year-old wants a career in coding, considering it “a very medium between being creative and being able to make a living.”

Kaela Robinson-Hernandez, 16, who has worked as a model, wants a career that combines computing and fashion.

Barbara Groh, 16, hopes to study computer science and material engineering — and write sci-fi on the side. “We can actually save the world, in a way,” she said, “by filling jobs and giving that creativity that sometimes men don’t have.”

The program encouraged the girls to reach for the stars. And they did, using their newly acquired coding skills to tackle big problems by using sophisticated technologies.

As their final project, Barbara and her teammate, Andrea Vieiria, devised a way to use images instead of words to do computer searches. Maria and her team worked on using facial recognition instead of passwords to secure sensitive information. Shahrine and two teammates invented “Pocket Poll,” an app to connect young people with political issues and candidates.

Yet another team tackled the modern-day plague of teenagers being too absorbed in their headphones to hear anything else. They set out to invent a feature for a headphone that would pause the music when it detected the listener’s name being spoken.

But they ran into a problem. Most of the existing voice-recognition programs they found were geared to lower registers, not female voices. 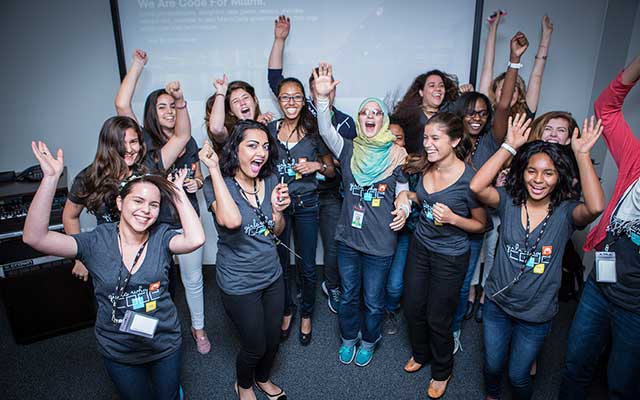