Learn more
Fans are starting to arrive in Minneapolis and their Super Bowl experience is about to begin. For the city of Minneapolis, the host of Super Bowl LII, preparations for the big game began more than two years ago. That is when the city formed its public safety task force, which has been hard at work with partners like Verizon to provide a safe environment for football fans from all around the world to enjoy Sunday’s game at the U.S. Bank Stadium. The city is anticipating its population to more than triple during, with nearly one million visitors expected as part of Super Bowl festivities. Verizon played a key role in helping public safety officials in Minneapolis create a fun and safe environment.

Working alongside the Minneapolis Police Department, Verizon installed dozens of security cameras on street lights in downtown areas that previously had minimal video surveillance coverage. The city needed more widespread coverage to help provide the best experience possible for fans and citizens. Areas of the city that typically have minimal crowds have been flooded with activities, events and general foot traffic, requiring extra coverage from a public safety perspective.
The cameras were added to existing infrastructure for quick and cost-efficient installation, and are connected in many instances to our own small cells, lending fiber network power for fast communication.
“Being about to use cameras to see traffic flow patterns, crowds and other important information is really imperative to the overall safety of that operation,” said Commander Scott Gerlicher from the Minneapolis Police Department. “We’re very grateful for the partnership with have with Verizon.”
The Minneapolis Police Department noted these public safety cameras will help officials, both at the local, state and federal level, monitor for any possible hazards and react quickly, helping to prevent potentially dangerous situations.

With big city events, wireless connectivity can become an issue, as an influx of people means a “blizzard” of data usage. The enhanced network we’ve built in Minneapolis supports both fans and first responders, who need to remain connected at all times to keep the city safe. Emergency officials city-wide will rely on Verizon’s network during the Super Bowl and beyond to communicate on mobile phones and other devices. We anticipate 15-22M terabytes of data during the actual game, up from 11M terabytes last year.
That is why we’ve increased wireless data capacity by more than 500 percent, added LTE Advanced technology and permanent new infrastructure to the Verizon network in Minneapolis/Saint Paul. The permanent new network, which features 24 new cell sites and 230+ small cell sites, will boost network performance in U.S. Bank Stadium and in areas of anticipated high demand, such as hotels and airports.

“There are three keys for public safety officials in planning for a big event like the Super Bowl: communication, collaboration and anticipation,” said Bill Bratton, executive chairman at Teneo Risk and the former New York Police Department Police Commissioner. “The work I have seen done by both local Minneapolis police officials and Verizon addresses these keys and should create a fun and safe atmosphere for spectators.”
Whether it’s a big sports game, major concert, or even a significant weather event, the rapid response needed to manage any public safety threats is the result of careful planning, the ability to deploy assets quickly, and having the best engineers in the industry ready to move in to maintain service while first responders do their jobs. Ultimately, public safety expects and demands a network as prepared and tested as the men and women who keep our communities safe every day.
That is why we invest billions of dollars in our network every year – more than $111 billion since 2000 – to grow our networks, increase capacity, and introduce the latest technologies and new services. Verizon has been supporting public safety nationwide for decades and we’re proud to support the city of Minneapolis for Super Bowl LII and beyond.
Learn more about how Verizon continues to support public safety and to advocate for interoperability, innovation and choice. 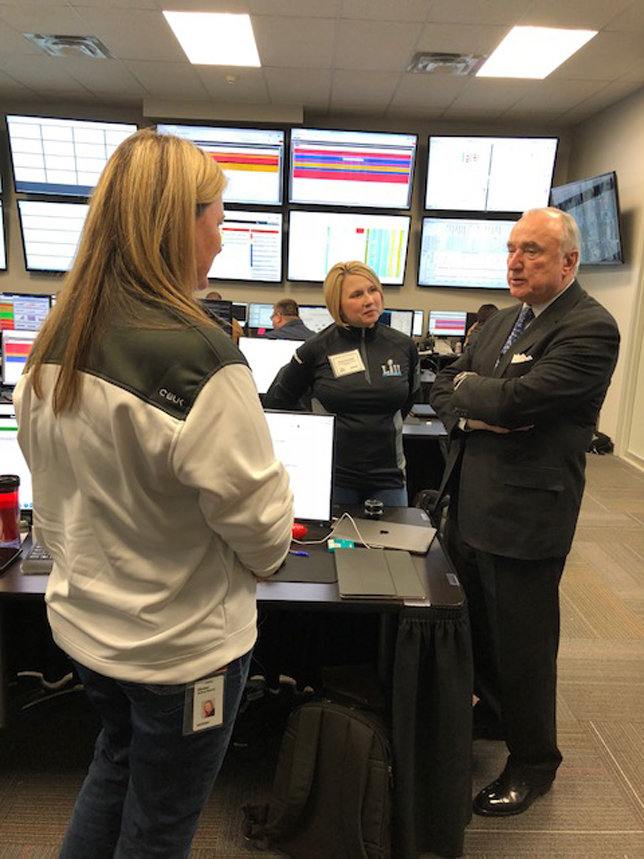