NEW YORK – Verizon Communications Inc. (NYSE, Nasdaq: VZ) today announced that Francis J. (Fran) Shammo plans to retire at the end of 2016 after 27 years with the company. Prior to his retirement, he will step down as executive vice president and chief financial officer, effective Nov. 1.

Verizon Chairman and CEO Lowell McAdam said, “I’ve worked closely with Fran for many years and have been continually impressed by his success at balancing the needs of customers, shareholders and employees. He has been a tremendous leader, and a voice of sound advice and counsel to me and the rest of Verizon’s leadership team. While Fran will be greatly missed, I respect his decision to retire, and I am pleased that he will stay through year-end to ensure a smooth transition.”

McAdam added, “I’m also pleased that we have such great bench strength at Verizon that our Board could appoint an executive as accomplished as Matt Ellis to succeed Fran. Within months of joining Verizon as treasurer in 2013, Matt led the team that raised a record $49 billion in one day to help finance Verizon’s acquisition of Vodafone’s interest in Verizon Wireless.”

Shammo said, “This is a great time for me to make this personal move. For Verizon, 2016 has been a significant transformational year, and I will leave knowing that the company is well-positioned to deliver on its strategic initiatives.”

Shammo, 55, was appointed Verizon CFO in November 2010, with responsibility for the company’s finance and strategic planning operations, and financial transaction services. Under his leadership, Verizon has focused on a strategy of network investment, strong dividends and transactions designed to deliver sustainable shareholder value. The company has divested non-strategic assets while securing complete ownership of Verizon Wireless and acquiring other assets (such as AOL Inc., Telogis Inc., and the recently announced Fleetmatics Group PLC and Yahoo! Inc. transactions) that position the company for future growth in the mobile video and Internet of Things markets.

Succeeding Shammo, Ellis will report to McAdam as Verizon CFO. Ellis, 45, currently reports to John Stratton, executive vice president and president of Operations, and a successor will be announced at a future date. 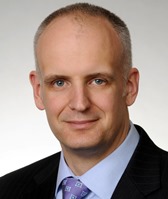 Prior to Ellis’ current role of providing financial leadership for Verizon’s business units, he was senior vice president and treasurer for Verizon, responsible for corporate-wide financing, cash management, pension and insurance activities, as well as the Verizon Capital Group.

Previously, Ellis worked in England for Dixons Stores Group PLC and Coopers & Lybrand, where he qualified as a Chartered Accountant.

Ellis holds a Bachelor of Commerce (Accounting) degree from the University of Birmingham in the United Kingdom.