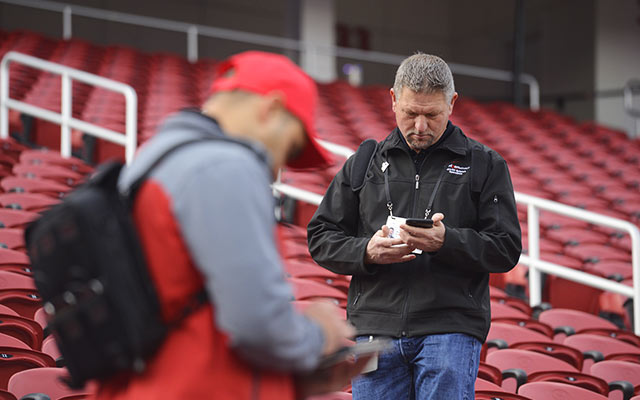 HOUSTON, TX – Football fans gobbled up a record amount of wireless data at Super Bowl 50 in San Francisco – and that has the Verizon team in Houston already gearing up for next year’s big game. Fans at Levi’s Stadium used nearly 7 terabytes of data this past Sunday on the Verizon network during the Super Bowl – that’s more than 30 times the amount consumed just four years ago. With data usage projected to continue to rise, the Houston network team has been busy at work to prepare for an even bigger challenge next year.

A contingent of network engineers from the Houston area were at Super Bowl 50 last week, monitoring and assessing how and when Verizon’s network reacted to the unprecedented demand for wireless data from customers. They will now use those key learnings to help improve the fan experience for next year’s championship game.

Fans at NRG Stadium will be able to enjoy more speed and power on their wireless devices during game day than ever before – Verizon already has invested more than $40 million to construct and activate a Distributed Antenna System (DAS) and utilize XLTE network capacity gains there. The system consists of 783 antennas placed strategically throughout the facility, designed to increase capacity by four times the previous system. With this new wireless infrastructure, more users will be able to share photos, download content, send messages, surf the internet and use other applications at faster peak speeds than before.

In addition, Verizon’s network team deployed an Outdoor Distributed Antenna System (ODAS) in the parking lot and tailgating areas of NRG to boost capacity and enhance fans’ wireless experience before and after the game.

Downtown and other areas of interest in Houston

Downtown Houston will host the NFL Experience and Super Bowl Central, so Verizon engineers have been designing and planning for the deployment of 200+ small cell solutions, 30plus new macro cell sites, and 50plus in building solutions for hotels, concert venues, convention facilities and visitor attractions in downtown, Galleria, and many other strategic areas of Houston. Verizon is planning various solutions for areas such as the Medical Center, the Museum District, the Theater District, and The Woodlands as well as several shopping malls throughout Houston including the Galleria Mall so visitors that come to the game can enjoy all that Houston has to offer.

For the 41 million visitors being serviced through Bush International Airport, Verizon will be adding capacity on the network using PCS spectrum in addition to the DAS already in place there. At Hobby airport, a new DAS system will allow travelers to check arrival and departure times, connect with loved ones and pass the terminal wait time with streaming entertainment over the lightning fast 4G LTE network.

2016 will bring additional enhancements and capital pending throughout the Houston market that will not only benefit Houston for Super Bowl 51, but will benefit customers living in and traveling to Houston well into the future.