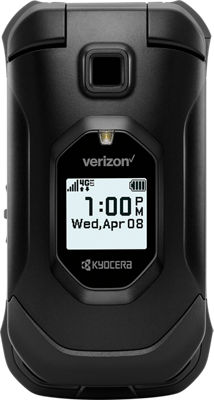 Introducing the ultra-rugged Kyocera DuraXV Extreme, designed to withstand harsh environments so you can meet life's challenges head on. Intelligent, compact and ultra-durable, DuraXV Extreme performs under the most challenging conditions. Built with easy-to-use features like a large, tactile keypad and a programmable Alert1 and Push to Talk1 buttons, Speaker and Stop keys. DuraXV Extreme also has an intuitive interface that's simple to navigate or customize. Combined with long battery life, loud dual front speakers, dual-mic noise cancellation, Wi-Fi hotspot capabilities,2 and a powerful Quad-Core processor, this phone is the extreme environment companion that won't let you down. You can count on the DuraXV Extreme and Verizon, America's most awarded network to be there when you need it.
All features & specs
CA residents: see the
California Proposition 65 WARNING
Reviews
☆☆☆☆☆
★★★★★

Bought to replace my 3G version of same phone. Was amazed by the advertised 18 day standby and 40+ hours of talk time. My old phone would do 3 days standby and 10-11 hours of talk time. I'm happy to report that my new phone goes 12-18 hours between charges (most days, unless a 4G update cuts that to an hour) and up to 4 hours of talk time, and the voice quality is much better, at least from what I hear. The people I call can frequently understand me, and the noise cancelling works very well unless I'm driving, outside or in a crowded place. Unlike the previous version, New text messages alert via audio immediately, and show up in your text list shortly after you open the phone to look at them. They also helpfully appear in whatever thread of messages you were using instead of jumping up at the top. This means people can text you unobtrusively, and you get to see the very last thing they texted instead of having to go into that thread to see what they wrote. It's really awesome, because I can now avoid reading long texts for up to a couple days. It really cuts down on information overload and is much better than the old "in your face" notifications. The buttons are all much smaller, more sensitive and very compact, making it easy to instantly cancel out of and close any menu item as often as you like. Also, I especially like the feature where the flashlight comes on when answering calls, so you know who lights up your life. The other cool thing is that when you open it to look at the clock, it will show you the last time you opened the phone for about 15 seconds before updating to the new time. This lets you know if anyone else has opened your phone. I never have to worry about accidentally calling someone who texts me, as that option and the other annoying option to add a caller to a contact directly from a call have been removed. I used to accidentally do this all the time, and now I can do it when I'm not on a call, which is probably much safer. Also, the speakerphone volume is much improved, to the point where I never have to worry about it being too loud or blaring over the sound of the engine. I would recommend this phone to anyone who wants all the features and usability of a smart phone in a flip phone case.

Sound quality is good. Much better than any flip phone I had before. But the battery needs to be recharged in 3 days when just on standby. Size seems to be quite larger than needs to be also.

1 Alert and Push toTalk requires a subscription
2 Mobile Wi-Fi Hotspot Capability requires activation and may incur additional data charges.
3 IP68 dustproof and waterproof rated for up to 30 minutes in up to 6.5 feet of water. Drop-proof up to 1.5m onto concrete
4 Certified for use in classified hazardous work environments where concentrations of flammable gases, vapors, or mists are not normally present in an explosive concentration (but may actually exist).
5 Based on average battery life under typical usage conditions. Average expected performance based on typical use. Actual battery life depends on factors such as network, features selected, frequency of calls, and voice data, and other application usage patterns. Results may vary.