Mobile solutions
Home solutions
Have a phone you love? Get up to $500 when you switch and bring your phone.

Have a phone you love? Get up to $500 when you switch and bring your phone. 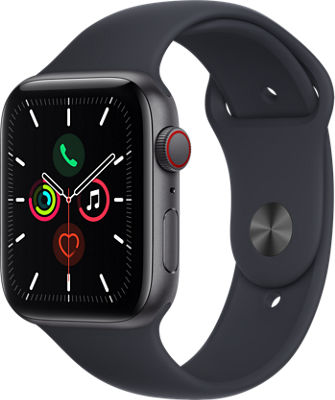 Get Beats Studio Buds on us with Apple Watch and iPhone purchase.
See details

Apple Watch SE has the same larger display size Retina display as Series 6, so you can see even more at a glance. Advanced sensors to track all your fitness and workout goals. And powerful features to keep you healthy and safe. The Sleep app lets you set a bedtime routine and track your sleep. And with cellular service, you can go without your phone. It's a lot of watch for a lot less than you expected. Pair your Apple Watch SE with Verizon, the network more people rely on.
All features & specs
CA residents: see the
California Proposition 65 WARNING

There are no reviews, be the first to write one.

1. Apple Watch Series 6, Apple Watch SE and Apple Watch Series 3 have a water resistance rating of 50 meters under ISO standard 22810:2010. This means that they may be used for shallow-water activities like swimming in a pool or ocean. However, they should not be used for scuba diving, waterskiing or other activities involving high-velocity water or submersion below shallow depth.
2. Irregular rhythm notification requires Apple Watch Series 3 or later (not including Apple Watch SE) with watchOS 6 or later and iPhone 6s or later with the latest version of iOS. It is not intended for use by people under 22 years old or those who have been previously diagnosed with atrial fibrillation (AFib). See apple.com/watch for compatibility details.
3. To use Emergency SOS, your phone needs to be nearby. If your iPhone isn’t nearby, your Apple Watch needs to be connected to a known Wi-Fi network and you must set up Wi-Fi Calling.