4.8 out of 5 rating
34 Reviews
Check compatibility 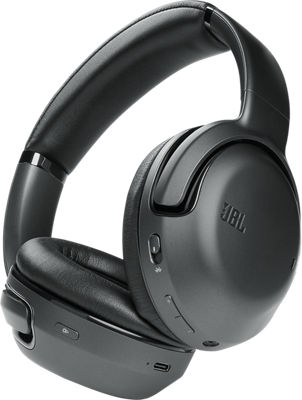 store selected
Details
Immerse yourself in your favorite tunes with the Tour One Headphones. These comfortable over-ear headphones are hi-res certified with 40mm dynamic drivers and JBL Pro Sound for a high-quality music experience. 4-mic technology allows for accurate and clear voice calls, so you'll always be heard, no matter the background noise. Activate your voice assistant for hands-free control to skip tracks, issue commands and more. And, with up to 50 hours of playtime, it can outlast even your longest playlist.¹

Adjustable sound settings.
Ambient Aware and TalkThru allow you to stay alert to what's happening around you. And, with SilentNow, you can stay productive by turning off the music but turning on Noise Cancelling.

Go further with the app.
With the free JBL app, you can set a unique music experience. Set custom EQ settings, switch on your Adaptive Noise Cancelling, or adjust your Ambient Sound settings.

¹ Battery life and charge cycles vary with use, settings, and other factors; actual results will vary.
All features & specs

I bought it a few weeks ago and the headphone perfectly performs everything that is expected and is described in the technical specifications. Great buy, recommend.

Stephen A · 9 months ago

What's in the box

I bought it a few weeks ago and the headphone perfectly performs everything that is expected and is described in the technical specifications. Great buy, recommend.

Stephen A · 9 months ago

I received these as a gift and WOW! The feel they have when on my head is hands down the best pair of headphones I own now. The fit is great and the sound quality is top notch, with great performance from the drivers. Bass is epic and the mids and highs just stand up and shine. I recommend these for anyone who wants the music so clear and crisp you forget your wearing them!

First of all I am fan on great headphones and I had many in my life and I have tested pros and cons of them. I personally enjoy JBL products what I have bought before. I had some of the cheap JBL headphones and I have JBL CLUB 700BT heaphones and JBL Extreme 2 for what I am in really high opinion. So I though I would buy JBL Tour One as they claim to be best headphones out there from JBL. Well I was so disappointed even after a 2 week of use. 1. In my opinion price do not reflects the features what they offers as JBL Club 700BT is by 100 euros cheaper but are on 100% better except that they do not have noise-cancelation. 2. Bass sucks compared to JBL Club, even when Bass equalizer was set. 3. Buttons are really bad designed. Touch button on the side is always pressed even without hands touching it, when I tried to sleep with them. For example blanket or pillow lightly touching it pause songs or plays next... in app there is no option to turn that button off or when headphones are set on silent mode so the buttons are disabled except turn off button... 4. First time tried active noise cancelation and honestly speaking I do not see much difference from passive noise cancelation. There are moments where I can see that noise cancelation is pretty handy, but those situations are rare. 5. when I taking headphones off, I noticed that button what switched between noise-cancelation/ambient-aware/off modes time at times are pressed because the placements is inconvenient and it is really sensitive. 6. If automatic noise-cancelation is turned on and when taking headphones off they turn off noise-cancelation is great feature, then there was time when I had turned my head on the side to take a look under table and that turned off noise-cancelation automatically what makes that annoying beeping sound, and then again that sounds when they turns off. So disturbing... :( I personally believe they would be best headphones if the bass would be increased, and there would be more control in app over the headphones, like disabling buttons at all or at least when sleeping. Although Cushions are really soft what I really like, and also that ears are completely isolated in headphones is quite nice. But overall I am sorry guys but could not give more stars than 2.

Thank you for taking the time to provide us with your feedback. We are sorry to hear that our JBL Tour One did not meet your expectations. We're always looking for ways to improve so we'll make sure to submit your feedback to our development team. If you have any questions or concerns about this product's features, please reach out to us at: https://bit.ly/2WocMfi

the best headphones you ever buy and love i

[This review was collected as part of a promotion.] These headphones are really great! The sound is amazing nice bass and high and lows. They’re comfortable for long time listening. I use them to listen to music or to watch a movie. They’re perfect!!!!

they stayed on my head!!

[This review was collected as part of a promotion.] if your someone who is enjoying there music or talk radio while working or at the gym JBL tour one head phones are awesome. the sound quality is magnificent, i mean its JBL it doesn't matter if they are headphones or 12 inch speaker the sound is amazing. With easy to locate buttons for volume or calling someone. They are sweat proof!! making a phone call is simple and you can hear perfectly i was a little taken back by how great it was to talk to someone without having to ask them "what" to everything they said!!

A Top of the Line Noise Canceler

[This review was collected as part of a promotion.] These have an amazing build quality, top of the line sound, and some of the best noise cancellation I have experienced.

[This review was collected as part of a promotion.] JBL for the win! These headphones are quality to the core. Deep, rich, and nuanced sound is delivered in a comfortable, lightweight, durable, fashionable, and intuitive design. I wear these all day at work in a noisy environment. I love the adaptive noise cancelling, as it allows me to still be aware of my surroundings while immersing in the music- I've even noticed some new details in recordings I've favored and known for years, because of the quality of these headphones. Battery life is impressive, and the rapid charge I can see being a lifesaver at the airport terminal. Only gripe I have is minor; the tap controls feature is handy, but if I am reaching for something and/or accidentally brush the control with my arm, it can activate. Either I would prefer a physical button or just need to be more careful myself lol. JBL took their shot at the crown with the tour one, and sank a game winner! All the smart assistance integrations are handy as all get out. If lost or stolen, 10/10 would replace in a heartbeat!

[This review was collected as part of a promotion.] I've had my JBL Tour One for approximately 2 weeks now, and so far I'm very happy with them. I can't speak of the durability, and I also haven't been able to try them yet in one of the settings that I most wanted them for (traveling on a plane), but I've played around with them a fair amount and here are some thoughts: Positives: - Great sound quality (no surprise from JBL): The sound is very clean and clear, good high frequencies and good amount of base for headphones. The frequency range they can play is very wide, which will please audiophiles. - They feel and look high end: The finishes feel luxurious (leather touches, chrome accents, the nice rounded plastic finishes, etc). - Very comfortable to wear: The leather ear cups and head band are super soft, and they fit comfortably. - Good for phone calls: they are optimized for call quality, with a few microphones to capture voice well. I've used them on work calls and I'm very happy with the result. - The carrying case is sturdy, well designed, and looks elegant. - Noise cancelling: this I haven't been able to test much as I'm not commuting to the office or traveling because of the pandemic, but a couple times I've worn them in the street they've functioned very well. And they have different modes depending on how much ambient noise you want to block. Room for improvement: (these are minor things to be honest. I would maybe subtract half a star if the ratings allowed it, but between 5 and 4 stars I think they're closer to 5 than to 4 for sure) - The Bluetooth pairing button takes some getting used to. At first I wasn't always able to get them to pair. The way I do it now that has been working for me is: when not using the headphones, I leave the Bluetooth button/switch on the top position. When I want to pair with phone I push the switch all the way down, hold for a couple second and release. The switch will return to the middle position, and the blue led should start blinking and it will pair very quickly. When I didn't start with the switch on the top position, it sometimes wasn't going into pairing mode. - The charging connector is a bit too tight - The instruction manual seems like Egyptian hieroglyph. Fortunately these are just headphones so there's not much need for a manual, but it could be much clearer. Overall, very happy with them and feel like a million bucks wearing them haha. Can highly recommend.

Can these sync up with the oculas quest 2 vr headset?

Hi, Gamer. Please, click on the "Check compatibility" link located below the name of this fabulous system in our website, so you can verify compatibility. https://www.verizon.com/products/oculus-quest-2-advanced-all-in-one-virtual-reality-headset-256gb/?sku=sku4690078 >Sophie

Thanks for your inquiries. Our JBL Tour One supports mulit-point where you could connect to 2 devices at the same time.

Can we mute the microphone while on an audio call on the device?

Thanks for your inquiries. There is a mute button on our JBL Tour One. Simply press and hold the JBL logo on the right ear cup for 2 seconds to mute and unmute the headphones.

Are the ear pads replaceable?

Our JBL Tour One earpads a replaceable. The pads can be purchased as spare parts. Please reach out to our Customer Support for pricing and availability. https://support.jbl.com/us/en/

Does the headphone play while charging or does it turn off when charging?

Our JBL Tour One can't be used while charging.