Mobile solutions
Home solutions
Have a phone you love? Get up to $500 when you bring your phone.

Have a phone you love? Get up to $500 when you bring your phone.

2.4 out of 5 rating
5 Reviews
Check compatibility 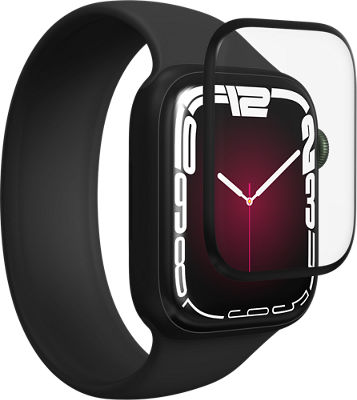 Easy application.
The included Applicator Tool makes it easy to install your screen protector without any bubbles or bumps.

¹Antibacterial technology is applied to the screen protector; it does not directly protect the user from any exposure to bacteria or provide additional health benefits. InvisibleShield screen protection tested by 3rd party against E. coli and staph.
All features & specs

I bought this a few weeks ago to go with my new Apple Watch. Within two weeks it was lifting at the corners and created air bubbles.

What's in the box

I bought this a few weeks ago to go with my new Apple Watch. Within two weeks it was lifting at the corners and created air bubbles.

So far so good! This is my second attempt at screen protection and it seems to be working. First one was the film and the edges feathered causing the product to peel off just after a few days. CS was great to suggest this screen protection as a warranty alternative. It’s been over a month and no feathering of the edges very clear although there is a very, very slight loss of screen sensitivity. Easy to apply. Found a YouTube video helpful.

Sticks to the screen really great. Looks like I don’t even have a screen protector on. Highly recommend!

Bubbled up after two days

Application process went smoothly, and I was enjoying the screen protector. Until two days later, I looked down at my watch during work and saw the protector had bubbled up in middle of the screen (bubble took up 75% of the screen). I had purchased Zagg's Ultaclear shield for my Apple Watch 7 prior to this one since this one is always sold out. The first Ultraclear started lifting on the edges after a few days, and the second one I received for warranty got a cut on the edge which eventually led to lifting. I thought this Glassfusion would be different as it's so highly rated, but I had no such luck.

There are no questions, be the first to ask one.