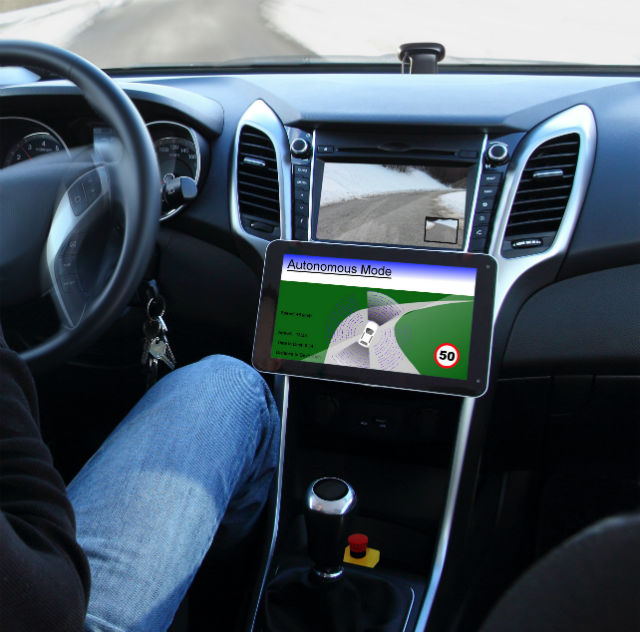 Remember the TV show Knight Rider  from the 80's? Where the futuristic car, K.I.T.T, would safely autopilot David Hasselhoff's Michael Knight through the city back to home base? At the time the show was the stuff of fiction, which, in order to enjoy required a healthy dose of suspended disbelief.

But today, the idea of an autonomous vehicle (AV) that drives us efficiently and safely from origin to destination is less a question of whether than one of when. (Minus the rocket launchers.)

"Autonomous mobility will only achieve its full potential
with low latency communication between vehicles and the surrounding infrastructure,
and 5G is the game-changing network to support this V2I communication."
-  Sean Harrington, VP of City Solutions at Verizon Smart Communities

To make autonomous vehicles a reality, there are four key communication challenges to solve: the ability for vehicles to talk to each other (V2V), talk to people (V2P), talk to a city's infrastructure (V2I) and talk to the network (V2N). In other words, V2X. But in order for an effective and reliable conversation to take place between a connected vehicle and another device, whether it be a car, a device worn by a pedestrian about to walk into a pedestrian crossing, or a light signal at an intersection, communication between connected devices has to happen almost instantaneously, and it must be quicker and more decisive than human communication. It is this kind of decisive action and instantaneous reaction time that brings 5G to the AV table in a major way.

"It's critical for people to understand how important 5G is to autonomous vehicles," says Sean Harrington, VP of City Solutions at Verizon Smart Communities. "It is hands down the most promising technology that can provide the opportunity for vehicles to communicate with other vehicles and city infrastructure in order to increase traveler safety and reduce the risk of accidents with other road users."

"Mobility in a Digital Age", a strategic transportation report prepared for the Los Angeles Department of Transportation, states, "Arguably, automated vehicles are potentially the greatest transportation technology innovation since the invention of the internal combustion engine with significant implications for safety, accessibility, convenience, and our physical environment."

To date, over $80 billion has been spent on global AV technology. The automaker, Ford, has announced that by 2019, 100 percent of its cars coming off the assembly lines will be equipped with cellular connectivity. Qualcomm will begin to deploy 5G chipsets for installation in vehicles as soon as 2019. According to a May 9, 2018 article by Lisa Beebe in Los Angeles Magazine, AVs are a foregone conclusion; the article speculates that within 20-25 years, human drivers will be off the road. And in fact, it's only when human drivers are the exception and not the rule that the full benefits of a true AV culture can be realized.

The first step toward realizing this goal, however, is planning the infrastructure that will allow for citywide, nationwide, and worldwide autonomous vehicle interaction. "With development, Cellular V2X (C-V2X) could take real-time sensor information and make it possible to relay that information to everyone in an interoperable, standard way," says Dr. Csaba Rekeczky, Director of Predictive Analytics & Computer Vision at Verizon Smart Communities.

Given all the global investment and commitments of cities and companies worldwide, 5G could do for transportation tomorrow what over-the-top streaming technology has done for broadband today. Let's look at why.

A few milliseconds really can make a difference

5G operates in the high frequency millimeter wave spectrum where data can be efficiently transferred at high speeds and incredibly low latency; it is the first technology that can truly communicate in better-than-human-time. "In terms of autonomous vehicles, the rollout of 5G is uniquely suited to the transportation use case," says Dr. Rekeczky. In other words, 5G is the AV game changer.

On the surface, latency may not seem like the most interesting topic in the world, especially when the kind of difference discussed is on the order of milliseconds, but let's put this in perspective.

The human eye needs between 50-150 milliseconds before it can register a change in image. 4G and LTE see latency speeds in about that same range of 50-150 milliseconds. That certainly makes 4G LTE highly competitive in the AV world, but it doesn't account for that split-second you need to determine whether the siren you're hearing is from the car radio, the other side of the freeway, or ten cars behind you, and then, given your conclusion,  what the best and safest course of action is.

Let's look at what this means in terms of reaction time. Assuming all the devices on the road, the pedestrian crossings, pavements, traffic signals—in effect, the infrastructure—are connected, instead of needing 50-150 milliseconds to detect an actionable event, a 5G network of connected devices can quickly detect the event and communicate those changes in near real-time with other connected devices within a time frame potentially 20 times faster than the speed at which a human could detect and communicate.

A great example of this is stopping distance, which is determined by the amount of time it takes to recognize an event and safely bring a vehicle to a stop. You're driving up to an intersection, a child jumps out from between two cars. In a 5G-based AV scenario with C-V2X, detection of such an event could potentially be predicted through using sensor data from surrounding vehicles or infrastructure such that the speed at which the AV can be directed to brake could be the difference between life and death. "With the plethora of sensors on vehicles, AV car manufacturers have the ability to achieve better performance than human drivers today,” begins Harriman, “but with a 5G-based network the opportunity to improve safety significantly further through use of data not available from sensors onboard the vehicle.” Harrington adds, "Autonomous mobility will only achieve its full potential with low latency communication between vehicles and the surrounding infrastructure, and 5G is the game-changing network to support this V2I communication.”

Having smart infrastructure in place not only allows AVs to identify and react to dangerous events, but also allows effective communication with city transportation authorities to provide alerts, such as road emergencies, changing traffic patterns, signal changes, and the status of other AVs sharing the road. That’s where the AV use case expands from a single event to an entirely new system of transportation and mobility.

How close are we to tomorrow?

No one company can provide all these critical applications, which is why multiple technology providers need to come together and work with cities and municipalities for a partnered approach toward implementation. Given the complexity of these new systems, every link must be strong in order to avoid a total system failure. That's why the implementation of a secure, reliable, low-latency 5G network promises to be the strongest link. In other words, one technology really can make the difference.

To learn more about how 5G is enabling technologies of the future, click here.

To learn more about Smart Cities and Communities, click here.

Jacqueline Schumann is a Content Development Manager in the Verizon Smart Communities group. As a Silicon Valley high tech veteran, she has over 20 years of experience in the combined industries of wireless, data, and video.