Read how Verizon is helping to eliminate barriers to learning. 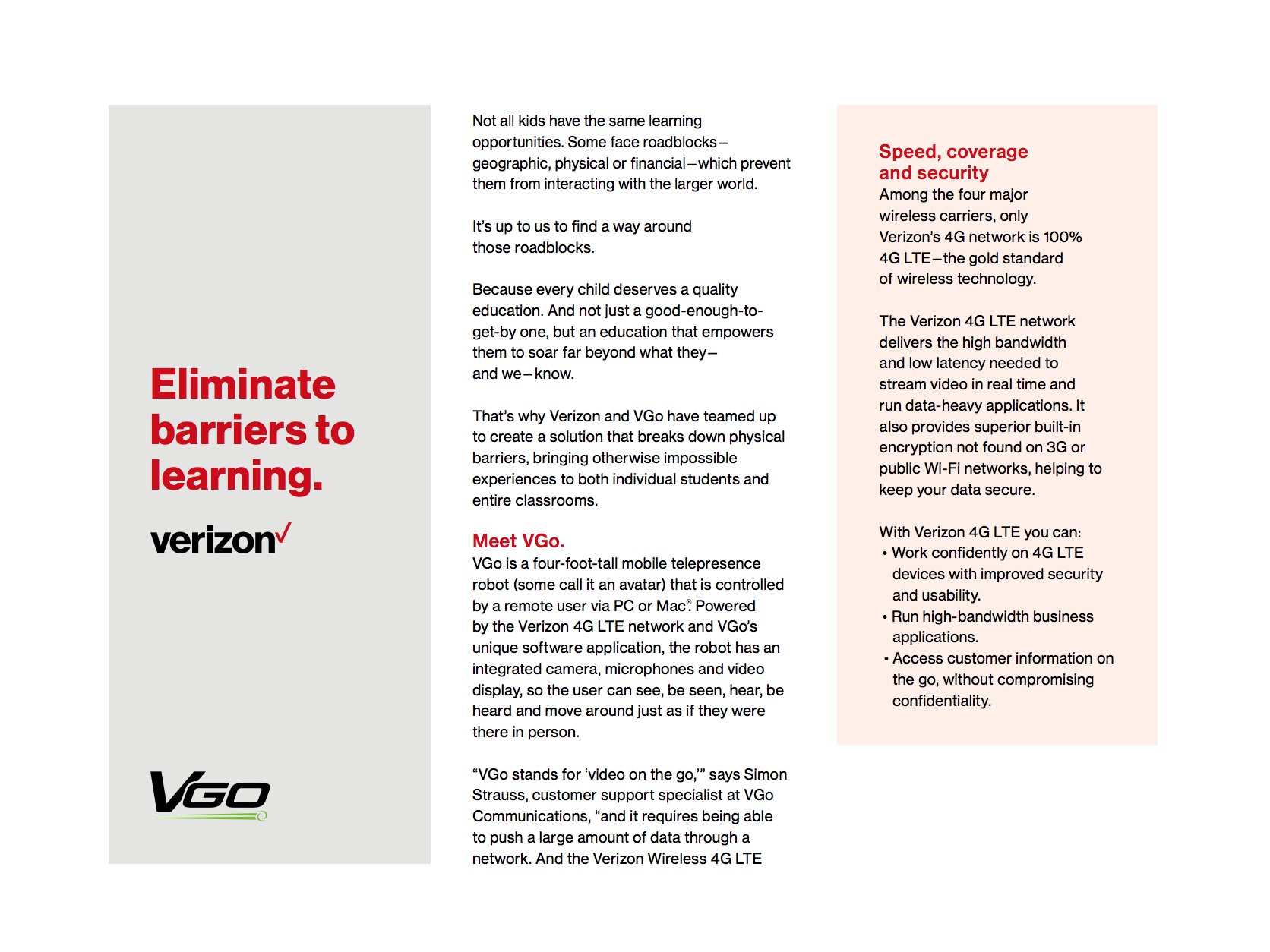 Not all kids have the same learning opportunities. Some face roadblocks— geographic, physical or financial—which prevent them from interacting with the larger world. It’s up to us to find a way around those roadblocks.

Because every child deserves a quality education. And not just a good-enough-to get- by one, but an education that empowers them to soar far beyond what they— and we—know.

That’s why Verizon and VGo have teamed up to create a solution that breaks down physical barriers, bringing otherwise impossible experiences to both individual students and entire classrooms.

VGo is a four-foot-tall mobile telepresence robot (some call it an avatar) that is controlled by a remote user via PC or Mac®. Powered by the Verizon 4G LTE network and VGo’s unique software application, the telepresence robot has an integrated camera, microphones and video display, so the user can see, be seen, hear, be heard and move around just as if they were there in person.

"VGo stands for ‘video on the go,’" says Simon Strauss, customer support specialist at VGo Communications, "and it requires being able to push a large amount of data through a network. And the Verizon Wireless 4G LTE network provides great bandwidth that is fully able to handle the video streaming that the VGo requires."

With VGo, classes can interact with remote scholars and experts, experience a day in the life of a working professional or go on a field trip far beyond district boundaries— and school budgets. Thanks to VGo, kids across the country can now visit world-class aquariums, enjoy exclusive behind-the scenes tours of the Pittsburgh Zoo and Aquarium and journey to the stars at the Houston Space Center.

"For students, VGo is an immersive technology," Strauss says. "It lets them be wherever the VGo is; it’s like they are really there."

Educators, therapists and parents alike are finding that being able to continue with a normal school routine greatly benefits homebound kids—academically, socially and emotionally.

Now, using VGo, ill and disabled students can participate in classroom discussions, move from class to class and visit with friends, bringing a much-needed sense of normalcy to their lives.

Many kids dress up their VGo, infusing the telepresence robot with their own personality. A third grader in South Carolina has hers wearing a pink blouse and tutu, a pink hair ribbon and two necklaces, while a Texas elementary student named his after his favorite football player and dresses it in his school T-shirt.

Ramesh Marimuthu, VGo program manager at Verizon, says the homebound kids he’s introduced to VGo have been eager to get up and start the school day with their avatar. "In addition to attending class, they are able to talk with friends in the hallways and socialize between classes," he says.

Response has been equally positive from the children’s parents, teachers and classmates. Kids who attend class with the VGo adapt quickly to its presence, treating the robot as if it were their classmate. (There’s also the "cool" factor of attending school with a robot.)

"Technology is transforming the way we educate our students," says Marimuthu. "Because of VGo and the Verizon 4G LTE network, the boundaries of distance have been eliminated."

VGo and Verizon are also knocking down barriers—and helping to reduce costs—in the healthcare industry, by enabling remote patient monitoring, consultations and family and caregiver visits.

With Verizon 4G LTE you can:

"Because of VGo and the Verizon 4G LTE network, the boundaries of distance have been eliminated."
Ramesh Marimuthu, VGo program manager, Verizon

Want to break down barriers with mobile telepresence? Learn more at http://www.verizonenterprise.com/industry/public_sector/education/k_12/digital_learning/